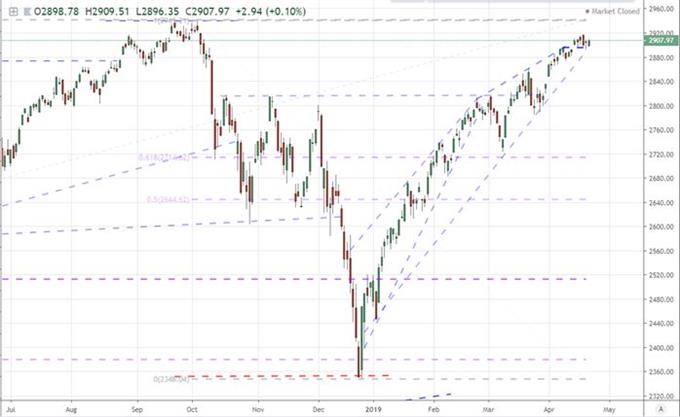 Do you trade on fundamental themes or event risk? See what live events we will cover on DailyFX this week (BOC rate decision, Australian CPI and US GDP) as well as our regular webinar series meant to help you hone your trading.

Trading to start this week was understandably quiet. While US markets were back online following the extended holiday weekend, many of the other 'Western world' liquidity centers stretched their downtime through Monday. The effect was a further exaggeration of the already-restricted activity level of the speculative market. Even where there was official trading on the day, the limited turnover and progress was remarkable. The S&P 500 was a perfect example of the uneasy extreme in inactivity. The six-day range on the benchmark equity index is the smallest we have seen (relative to spot price) since December 2017. As for volume, conditions were remarkably restrictive even for a holiday. While it may not make the lack of traction more surprising, the proximity to record highs certainly makes a more loaded situation. The record highs set in September/October are within easy reach of a single day's sudden exuberance, but there is remarkably little to cling to in order to justify the break - much less the follow through. That is not to say it won't happen, but the longer it struggles to close the deal, the deeper the scrutiny and skepticism that we can sustain the recovery effort from the fourth quarter slump to justify a genuine revival of a temporarily-displaced dominant bull trend.

Moving into Tuesday, most markets will be shaking off the sleep and tuned into any significant cues that markets are once again moving in a committed way. For the S&P 500, the aforementioned narrow range also takes the shape of a head-and-shoulders pattern. I wouldn't give too much weight to the candle formation itself given how flat it is, but the environment for which it has formed is very representative of our general market conditions. This indecision has occurred noticeably just short of a record that most other risk-leaning assets are far from replicating. It has not graduated from recovery effort into reliable trend - and that three-month climb has come remarkably fast and likely with an inordinate representation of speculative interests. Even without this holiday, we were already seeing the effects of flagging conviction with participation drying up. There will be a natural expectation for the seasonal volatility decline expected heading into the Summer months (April through June) to increase the gravity on market inactivity. Yet, already pushing extremes, traders should be mindful of 'accidents' where by thin markets can amplify strong response to a significant systemic development and trigger a cascade in deleveraging.

Chart of Historical VIX by Month 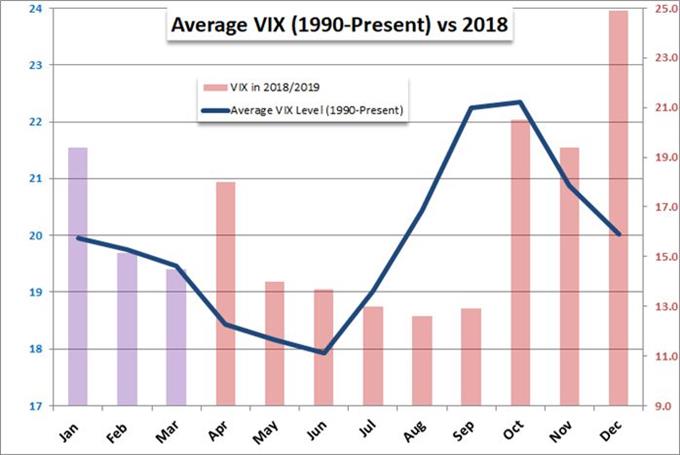 Earnings is Top Theme but Be Mindful of Trade War Developments

While lightning can strike out of the blue in markets, it is more likely that there is a fundamental origination to the eventual restoration of sustained market volatility. The most headline-friendly theme moving into the first active hours of the trading week will be US earnings. We are due first quarter figures for a number of top American corporations over the coming days, but certain updates and groupings will speak to certain themes that run deeper than the specific bottom line in question. General growth, trade wars and speculative banners will all test the attention and conviction of global investors. For Tuesday specifically, there are three particular updates I'm watching - though they are perhaps not the ideal representatives of their respective theme. Twitter is not one of the FANG members nor top tech, but it will warm up interest for the latter released Amazon and Microsoft. Procter and Gamble is a leading consumer goods company for the US and can stir up speculation over US growth which will receive its official report on Friday. Then there is Harley-Davidson, the motorcycle manufacturer that drew the ire of President Trump last year amid trade wars. How much impact have these trade restrictions had on this company and will it once again earn unfavorable Presidential tweets? 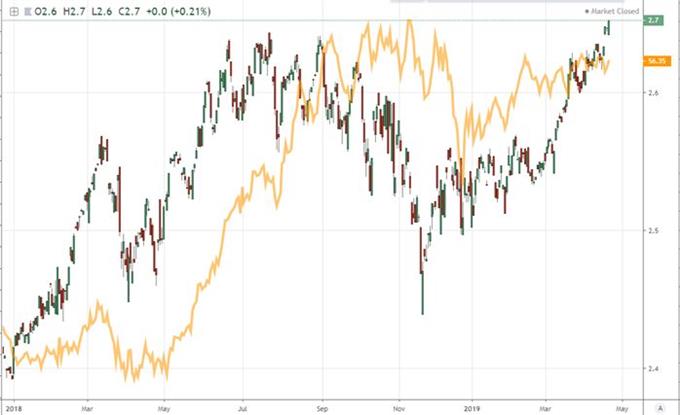 Where earnings will be an easy headline topper, it shouldn't mean that we discount the other fundamental themes that have accounted for the majority of market volatility and trend development over the past year. The threat of recession in global growth is a persistent concern but the focus on Friday's 1Q US GDP will restrict preemptive moves on sentiment alone. As for monetary policy, its trappings and shortcomings are matters that are less likely to arise from Bank of Canada or Bank of Japan meetings much less more ancillary means. Trade wars in the meantime are active fodder. In juxtaposition to the Harley-Davidson reflection of US earrings, Chinese firm Huawei reported quarterly earnings for the first time with a reported 39 percent year-over-year increase to just shy of 180 billion yuan. The costs of trade wars don't seem to be flowing in the direction expected or intended. Even more remarkable on the trade front was the announcement by US Secretary of State Pompeo that the President would not extend the waivers to those that continued to import oil from Iran. Italy and Greece who had wavers reduced their imports to zero; but China, Japan, India, South Korea and Turkey were still consuming the country's energy shipments. This will add further layer of complication to persistent trade conflicts between the US and much the world.

Cultivating a Preference Outside of the Core Majors

As we look ahead to the prospect of more meaningful swings in the markets, the promise of activity almost registers as hope that the long-sidelined progress of the FX market's most liquid members are due for critical breakouts. For the benchmark Dollar, the indecision is clear. The measure of the 40-week range (as a percentage of spot) on the trade-weighted DXY is the smallest since Summer 2014 and before that an extraordinary period of quiet back in 1996. The milestones for a break are obvious enough, but not what would spark the commitment. Would it be a key piece of event risk like Friday's growth update or perhaps something thematic like the recognition that trade wars are costing the US consumer dearly? That is unclear, and so long as it remains that way, the Greenback will struggle. For the Euro, the same question of targeted event risk and systemic motivator is under scrutiny. We don't have any critical sparks this week and the upcoming consumer sentiment survey surely doesn't qualify, while Italy's defiance of EZ deficit targets tugs at another thread in cohesion. For the Sterling, a near-term break is inevitable but commitment on a technical cue is anything but so long as Brexit remains unresolved. That said, I would be careful of assuming such a heavy congestion vs breakout view as what retail traders evaluate of GBPUSD around 1.3100 and 1.2975. 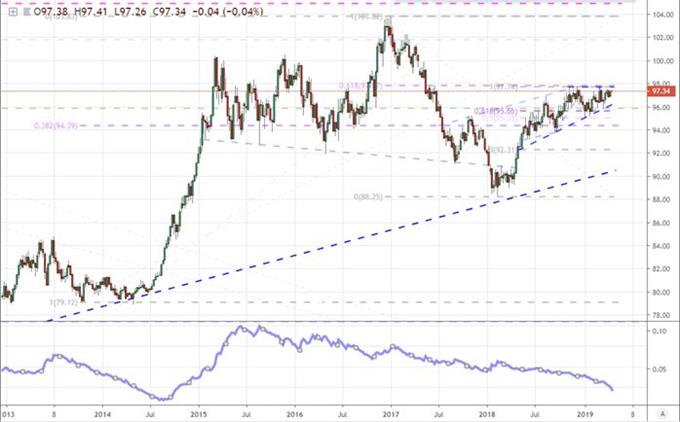 Though far less popular some of the other majors present more appealing technical and situational circumstance. The Yen crosses have established such narrow range recently that a break is certain. The connection to general risk trends can provide the backdrop for movement. If you are looking for scheduled event risk with real potential for traction, consider Wednesday morning's Australian 1Q CPI update which exposes the most austere forecasts for rate cuts through year's end of any major central bank. Setting it back to neutral could leverage a far greater Aussie Dollar response than the USD could leverage from a Fed shift. In similar terms, the Bank of Canada rate decision ahead could finally charge USDCAD which is working its way into a wedge - but really the indecision is universal for the Loonie. And, further off the beaten path, we have the Swiss Franc. Its tumble these past weeks/months is starting to come upon general support. That alone wouldn't prompt much interest, but this is a currency that is unanchored from its own fundamental landscape. Consider that for pairs like EURCHF, USDCHF and AUDCHF which are drawing extreme speculative positioning. We discuss all of this and more in today's Trading Video.

Chart of USDCHF and Retail Speculative Positioning on the Pair (Daily) 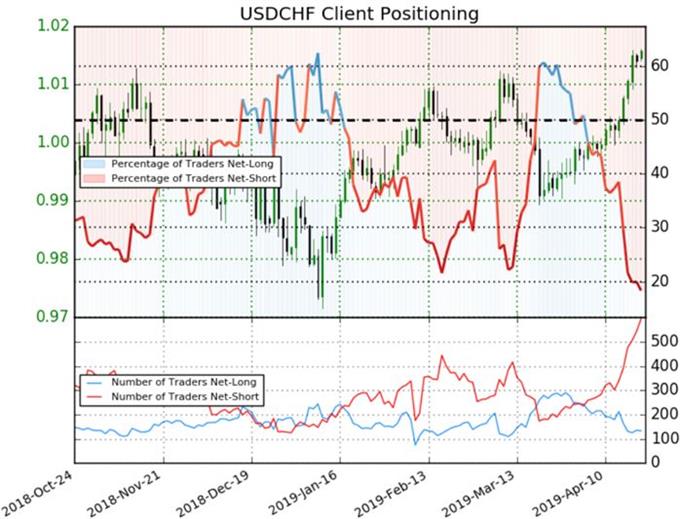