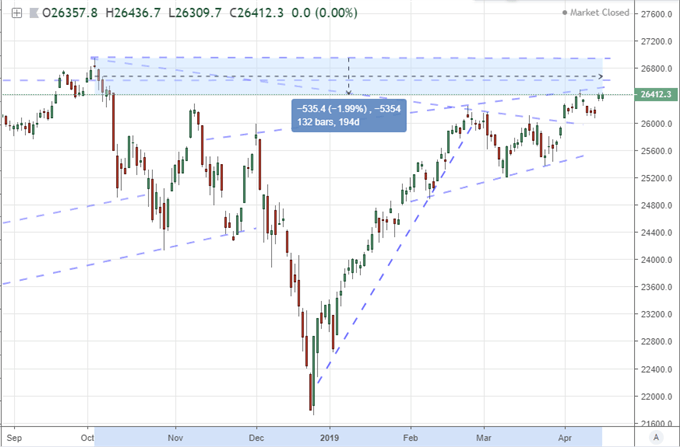 Can Dow Hit a Record, Dollar Restore Its Run Next Week?

We closed out this past week with another speculative jump. The effort was most notable in the US indices given their proximity to record highs. The Nasdasq is closest and the blue-chip Dow furthers of the major three - though that is still less than a 2 percent climb to hit a new milestone. As of Friday's close, the S&P 500 is approximately 1.2 percent away from the intraday record high set just six months ago and 0.8 percent from the achievement on a daily close basis. If we were to take a straight-line extrapolation from the previous quarter's performance with the favorable, preferential treatment of the mixed fundamental updates, overtaking that watermark would seem an easy feat for the week ahead. Yet, traders should calibrate their assumptions. Given their outperformance and the prominence afforded to the most heavily invested asset class in the world's largest market, US stocks will hold a strong influence over sentiment in general. That said, what if its recovery effort for the first quarter falls apart short of the full retracement mark? It wouldn't trigger any imminent collapse but it will effectively cap the drift higher in most other risk assets. Should we move to record highs and bulls struggle, the enthusiasm to close the gap to distant highs in other asset classes will be tepid; while a break higher and then move to retrace first quarter gains could ultimately prove the most damaging scenario for global markets. A lot of responsibility is being placed on the lofty shoulders of US indices - a story similar to that of the Fed relative to its global counterparts.

Chart of Dow Index and Distance from Record High (Daily)

When there is a high-profile technical milestone - like a psychological level in a record high - in close proximity, there is often a speculative pull that can override engrained skepticism to see the level hit. That gravity is severely diminished or non-existent however when such benchmarks are still a 'trend away.' That is the situation with most other popular risk-leaning assets. Rest of world equities (VEU) are generally milling around the half-way point of the recovery from 2018's bear trend. Emerging market benchmarks like the EEM and EMB are similarly far from their previous highs. Carry trade, commodities and sovereign yields are all similarly far from summitting. This presents a very different reality of global speculative intent than what a cherry-picked benchmark like the Dow may insinuate. In time, the gap will close between US indices and broader risk; but it is unclear whether the latter slowly advances to fill the gap or the former's collapse does. Making a serious effort to resolve the disparity over the coming week would be a very tall task. The critical themes of influence these past months has ebbed and liquidity over the coming week will be historically truncated. The Good Friday holiday observed by the US, Europe and a number of other liquidity centers drain momentum through the second half of the week definitively - and likely short circuit its potential throughout. 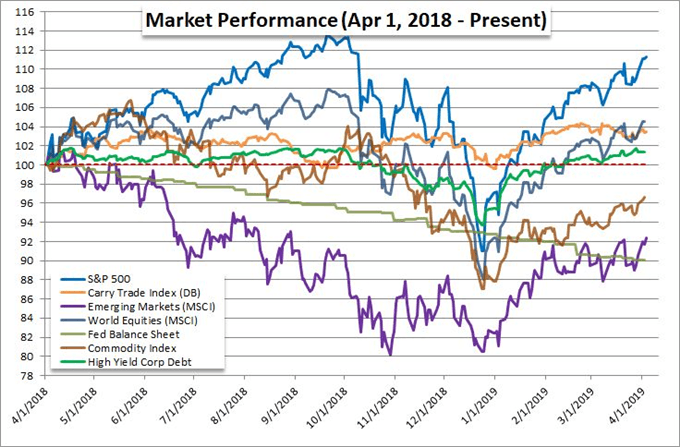 Through the week ahead, there are a number of high-profile releases due to cross the wires; but due to the lost traction of much of the systemic focus and various caveats on what is on tap, these sparks are unlikely to catch. Of the three major fundamental drivers we've seen trade control of the markets over the past months, monetary policy is the least likely to rear its head. There are no major rate decisions on tap and the run of central bank speakers is unlikely to offer definitive rate speculation when they have been so careful about setting the speculative wheels turning. That said, don't completely lose sight of this issue as pressure on the markets and economy will raise desperation and dependency on the banks to step in to offer salvation. Their capacity at this point is little more than symbolic. Far more potent an issue ahead will be the update on growth conditions. While we don't have a scheduled global update as we did these past two weeks (with the IMF and WTO), we do have a very high profile 1Q Chinese GDP update. The markets rightfully question the veracity of this data when it crosses the wires, but the markets are nevertheless tuned. There will also be April Eurozone and US PMIs on offer in the closing hours of liquidity Thursday, but market depth will likely curb all but a significant surprise. 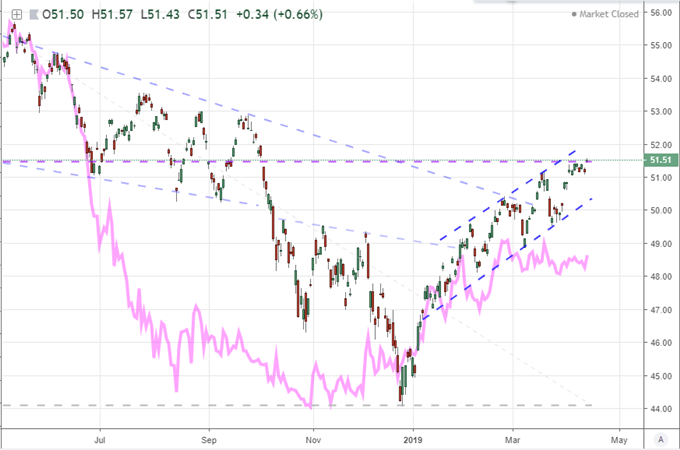 In terms of what can prove a surprise fundamental driver, trade wars is still a headline dependent motivator. To a certain extent, the Chinese growth figures will offer a milestone for the war's impact to this point. On Friday, China reported its trade surplus jumped to $32.6 billion despite the tariffs, but the climb was leveraged by a 14.2 percent increase in exports and -7.6 percent drop in imports. Consumption by the world's second largest economy still accounts for a considerable percentage of global growth. As for negotiations between the United States and China, we are still living headline-to-headline awaiting the official summit to be scheduled between Presidents Trump and Xi. In the meantime, the world is lurching towards a much more systemically-threatening trade situation as the European Commission has reportedly drawn up a provisional list of some 20 billion euros in US goods that it is prepared to apply import taxes on if President Trump follows through on his threat to enact $11 billion in tariffs as retaliation for 'illegal' subsidies for Airbus.

If Breakouts Struggle and Trends are Improbable, Identify Range Opportunities

Considering the liquidity anchor, the detached thematic influence and uneven scheduled event risk; it is difficult to forecast strong breakouts much less productive trends. In the absence of those critical market types, we are left with range conditions. Far from the unfavorable market type that so many market participants seem to label 'congestion', the definable technical bounds and regular turns actually suit retail traders' appetites quite well. In the FX market, most of the major are contained to well-established boundaries. That is particularly true for the Dollar, Euro and Pound. The Greenback is trading in its smallest 40-week range since 2014 - and before that 1996 - with both instances ending with extreme volatility to match the extreme inactivity to precede it. And, among its major pairings, EURUSD as a baseline is currently trading almost dead center of its wedge/range between 1.1400 and 1.1200. The Euro itself has a few fundamental issues for which it is juggling - the ECB's dovish dive, Euro-area growth stalling in critical areas and Italy stirring fresh political troubles. The Eurozone PMIs and Bank of Italy/Istat weigh-in on the controversial budget will be important this week, but the depth of impact will likely prove shallow. 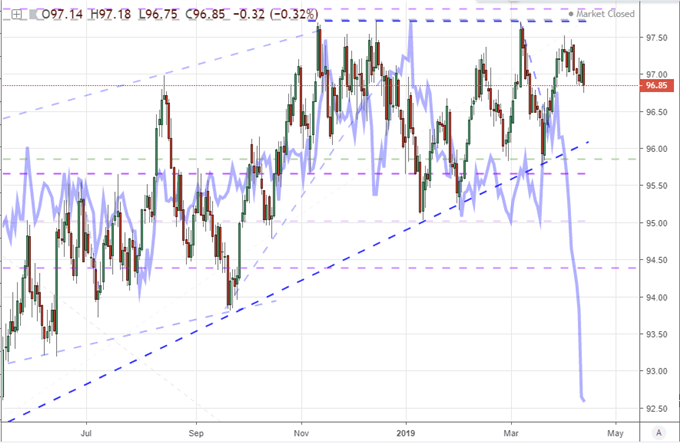 As for the British Pound, Brexit is still an unresolved threat with considerable fall out...when the decision is ultimately forced. The EU Summit resulted in an agreement to push back the cutoff by six months out to October 31st. While that doesn't change the likelihood that officials are going to come to any more favorable an agreement, it does buy time. That may allow greater interest around the upcoming week's UK jobs figures, the inflation data and BOE's financial health report; but a return to trend is highly improbable. If meaningful breakouts (the type with follow through) are unlikely and trends even lower in the probability totem, then range conditions are more likely to prevail. For pairs like GBPUSD, AUDUSD, EURCHF and others; that can match market conditions to fundamental inactivity to technical opportunity. Consider the ranges you find in the markets this week. We discuss market conditions in the week ahead in this weekend Trading Video. 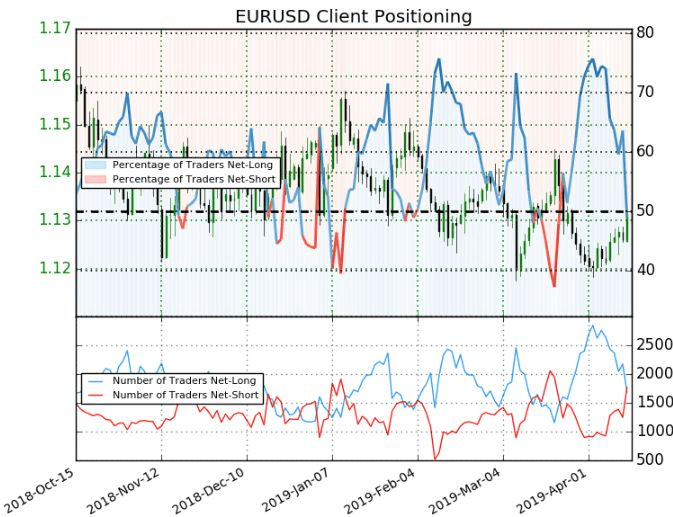