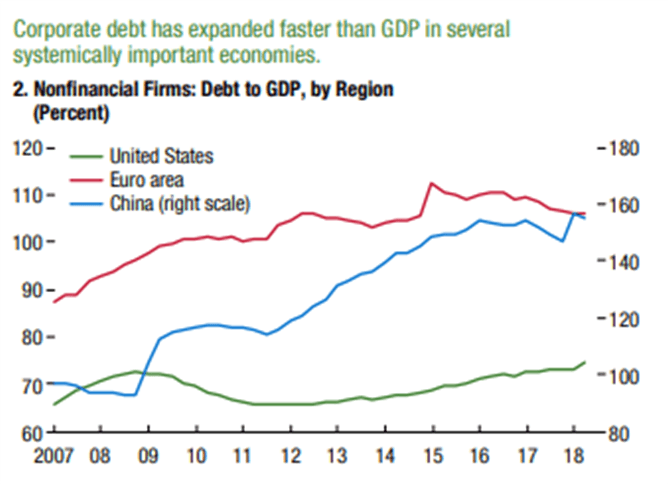 The IMF Warns On Financial Stability, Adding to Its Downgrade to Growth Forecasts

Thus far, the IMF and World Bank spring meeting seems to carry a clear cautionary tale for global citizens and investors. They started off the event with the third downgrade in global growth forecasts in six months with the WEO (World Economic Outlook) Tuesday. This past session's report on the health and prospects for the financial system is even more troubling. While the world's pace of expansion is expected to slow, there is no overt concern of a stall in growth with the exception of a very few countries under certain scenarios. Those scenarios are what should worry all market participants. The GFSR (Global Financial Stability Report) set out clear concern over the health and stability of the financial system moving forward. Speaking in language that would appeal to technical traders, the update suggested US capital market benchmarks - like the S&P 500 and Dow - are displaying "late-cycle dynamics". Following the bouts of volatility in 2018, that would be a fair assessment. Their concerns seemed to tap more systemically into liquidity, mentioning occurrences of flash crashes. Liquidity is the lifeblood for all markets. It will determine direction (bullish or bearish), activity level (high or low volatility) and the general environment (range, breakout, trending). This has been a topic of conversation of ours for some time, so I am only surprised that it is garnering more 'mainstream' mention.

General conditions set the scene while possible catalysts are observed for potentially igniting the fire. On that front, there were plenty of troubles seemingly plaguing the staff at the IMF. Some assets - like emerging market corporate bonds and high-yield debt - were singled out for reflecting market valuations that exceed fundamentals. Tipping over into trade wars territory, there was a clear concern over the relationships between key economic partners. US Treasury Secretary Steve Mnuchin this past session suggested further progress with China when he suggested an agreement had been met on "enforcement mechanisms" - an important impediment to a deal. That wouldn't be enough however to offset President Trump's threat to impose $11 billion in tariffs on EU imports in retaliation for Airbus subsidies. Speaking to monetary policy, the group insinuated any effort by the Fed to return to its tightening regime could throttle the local economy with knock-on effects to the rest of the world. I thought it more remarkable that they weighed in on the distortion stimulus and extremely accommodative monetary policy in general has caused to the financial system. They fell short of warning that, push-coming-to-shove the central banks would not be able to put out new financial fires should they arise - a fear that I maintain. In all of this, the financial-economy impact was reiterated.

Risk Assets Look Like Tourists Milling Around Through a Hurricane Siren

Despite the unmistakable risks enumerated by the IMF and their clear unease over the course of the global economy, the markets acted as if they didn't receive the report. The S&P 500 and Dow - called out obliquely for their late cycle habits - actually inched higher towards their respective record highs. Perhaps even more remarkable was the favorable performance from emerging markets (EEM and EMB) and junk bonds (HYG and JNK) referred to specifically as being overpriced. It reminds me of a situation a few years ago when then-Fed Chair Janet Yellen ventured an assessment that certain sectors of the equity market were "frothy" and they continued to rally in the days following. Complacency is no surprise at this point, but traders should continue to tread carefully. Many of these points of discussion on risk were arcane not long ago, and now they seem to be mainstream and even regular headline fodder. All that is necessary is another jolt of volatility to set market participants on the hunt for 'reasoning' for there to be cautious and they will find the list long and unsettling. 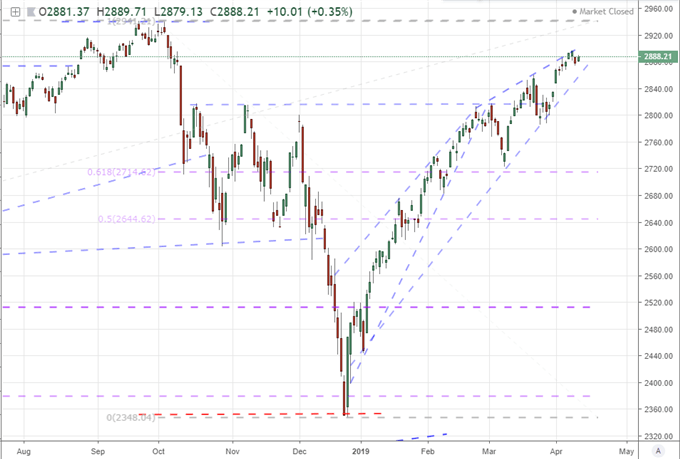 It is this bias that we should follow as a precursor to our assessment of risk and a general trading approach. If markets are able to maintain their positive risk bias, it will unfold under a cloud of skepticism for the global economy and the sense that a financial risk is always around the corner. That makes for a very limited risk/reward scenario as a rule for a general perspective on the overall market. That doesn't mean we should write off 'risk on' trades altogether, but it is important to be more selective (favoring global shares represented by VEU versus US like Dow) and set more reasonable targets against more forgiving stops. In contrast, 'risk aversion' may be a lower probability course, but it will come with far more severe consequences/opportunity. A clear measure of this skew can be found in volatility measures. Whether equities (VIX), FX, commodities, yields, emerging markets or any other asset class; the associated 'fear' measure holds at remarkably low levels. There is already a healthy debate over whether these readings should be taken at face value or as contrarian readings, but we should look more closely at the underlying implications. These readings are universally derived from implied volatility on their respective spot market's options. This is as much an indication that markets lack protection (a hedge) as they are some signal of imminent volatility forecast. When markets are ill-prepared for heavy moves, the fallout from realizing exactly that can be severe. 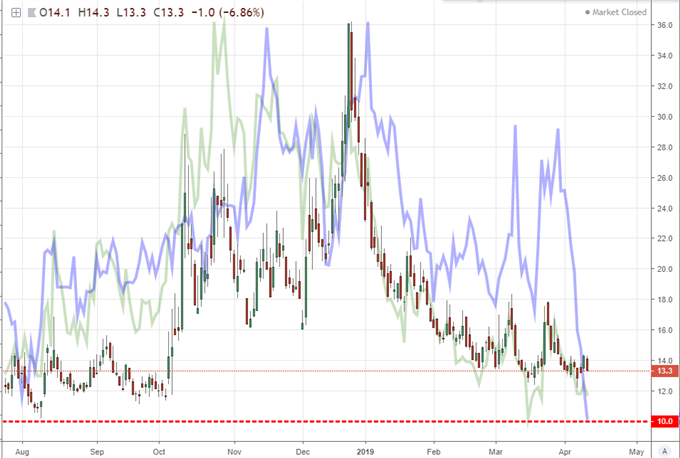 Looking out at the regional influences on tap, the Euro carried the most prominent traditional event risk: the European Central Bank (ECB) rate decision. As expected, the world's second largest central bank held its course unchanged. That should surprise no one considering the group took a hard-easing turn at the last meeting with the introduction of the third TLTRO (targeted long-term refinancing operation) program. While the authorities didn't change their tack, they did reinforce their voiced concern. President Mario Draghi reiterated a forecast that spelled a skew of downside risks including the threat of poor trade discussions with the United States. The Euro eased modestly on the day, but the devaluation factor for the currency wasn't influential enough to spur a more systemic retracement of 2017's ill-gotten gains. Another event in Europe would draw just as much attention: the EU-27 summit. This was a meeting specifically to address the issue of the extension to the Brexit that UK Prime Minister Theresa May requested on behalf of her Parliament and country. The UK now has until October 31st to find a solution, but that additional time won't make trading the Pound any easier. Trends will remain elusive while the recent swell of volatility will continue to retreat until headlines spur them back to life. 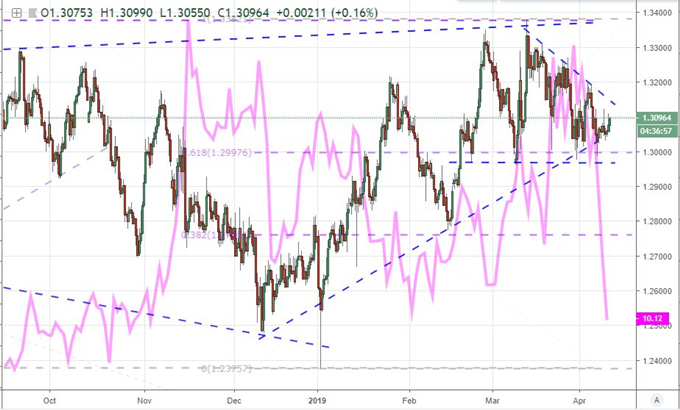 While the focus for the Pound this past session was on the EU Summit's outcome, the Sterling was effectively distracted from the key event risk including February GDP (0.2 versus 0.0% expected), trade balance (-14.11 billion versus -12.85 billion pound deficit) and industrial production (0.6 versus 0.1% expected). Prioritization is an important concept when trading fundamentals and it is essential when approaching the US Dollar. What is motivating the world's most liquid currency? Fed rate forecasting doesn't seem to be a very productive charge for the Greenback. This past session, the market's favorite inflation indicator (CPI) offered a core reading exactly in line with the target of 2.0% and the FOMC minutes issued the same sense of caution with a few members still holding open the door for a hike later in the year. The implications for rate forecasts barely registered according to Fed Funds futures and the Greenback in turn barely moved. It seems the currency's roll as the most liquid counter currency remains the primary role. That being said, I do not expect the run of Fed speakers on tap will hold a serious influence over the Dollar's course. Instead, I will keep tabs on the EURUSD, GBPUSD and USDJPY for cues on the Dollar. We discuss all of this and more in today's Trading Video. 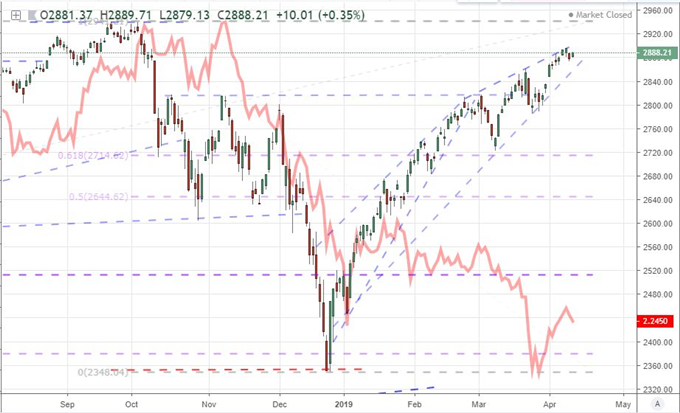