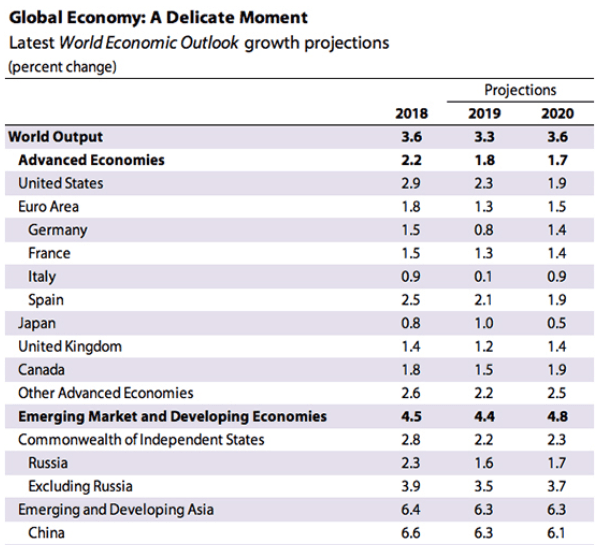 Another overt warning flare was shot over the global economy this past session, and the markets seemed to finally bow somewhat to the growing concern. In the wake of last week's disappointing May PMI figures and the World Trade Organization's (WTO) sharp downgrade to its own GDP forecast, the International Monetary Fund (IMF) released its own update to the growth outlook for 2019. While not as severe as the WTO slash (3.7 to 2.6 percent), the 0.2 percentage point reduction to 3.3 percent marks a steady and unflattering downgrade to the potential of an economy that is fully funded by extreme monetary policy and contrasts speculative appetite that seems to price in perfection - if the Dow's standings were our barometer. In addition to the broad and local downgrades to growth forecasts, the group's WEO and Chief Economist would list a series of concerns for the future. The slowest pace of growth for China in decades and economic troubles for Europe highlights in the same vein. Yet, they list would venture into trade war and monetary policy risks - the two other themes that we have seen vie for the market's control.

The IMF suggested the Fed's efforts to tighten monetary policy these past three years could translate into issues through a higher Dollar, pain for the emerging markets with exposure and potentially choke off growth and/or tip financial problems. Trade tensions was promoted as a principal concern for the future with the US-China negotiations and troubled USMCA sign off mentioned alongside the unrealized auto tariff threats. All of this could reasonably be fingered as possible catalyst for the day's slip in risk trends. However, I think the market's practiced complacency around forecasts likely contributed little to the session's swoon. That responsibility likely goes to reports that US was considering tariffs on $11 billion in European goods as retaliation for unfair Airbus subsidies - which was ultimately followed by a definitive threat by President Trump delivered in a Tweet. Despite the magnitude of both a slowing global economy and possible spread of trade wars, the S&P 500's slip on the day was rather modest. Nevertheless, it would represent the first bearish close in nine trading sessions - breaking a stretch of gains that matched the longest climb for the index in 15 years. 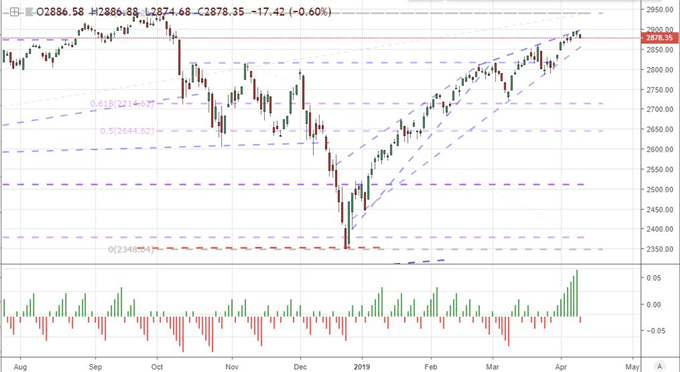 With the US indices' incredible three-month climbs sputtering, we should evaluate the breadth of sentiment to see what the implications are for next moves. The short-term reversal risks that may arise from the failure to overtake previous record highs can garner its own speculative pressure, but this doesn't register as a universal necessity. Looking at global equities excluding the United States (the VEU ETF), we find the asset class has been held up at the midpoint of 2018's long and intense decline. Emerging markets, carry trade, commodities and other risk-leaning assets produce varying degrees of restraint all their own. Even looking within US equities, we find that there has been a disproportionate demand for tech shares versus other sectors such as finance, healthcare and staples. This suggests a leveraged speculative appetite that prioritizes momentum over value - something that we have registered before. Yet, at this stage and under this canopy of fundamental concerns, a turn in sentiment may not happen with any sense of urgency. Looking to volatility readings from equities and emerging assets to yields and currencies, it is clear that there is little pressure to invest in a hedge nor speculative on a reversal through derivatives. That doesn't make these readings any more prophetic than US indices on the state and timing of a sentiment shift, but it will help restrict a sudden shock in sentiment.

In these conditions where fundamental threats are held at arm's length and implied volatility remains deflated, shorter-term range trading remains the most appropriate approach to the markets. However, traders should consider the disparity in genuine risks and what is implied by a market that favors the convenience of familiar trends. Retail FX traders for example continue to pursue active range trading on many of the majors. For the likes of the EURUSD, that worked out well with the hold and turn from 1.1200 support. The run since that reversal was made has been reserved and that is the nature of setting objectives on low volatility markets. As well as that particular pair's swing played out for retail traders, the same aggression follows the likes of AUDUSD. While that pair's range is very consistent, it is also very narrow - representing significant risk for the amount of return pursued. Perhaps the risk is more appreciable for GBPUSD. Retail traders have ramped up their conviction in a Cable rebound from 1.3000 support. That is a bold enthusiasm given the deadlines on Brexit. 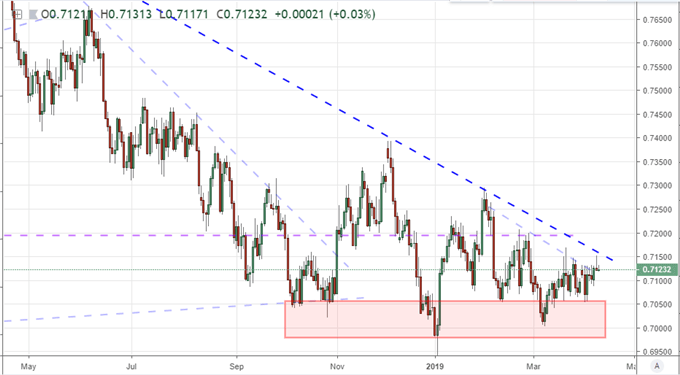 Once Again, EURGBP is the Convergence to Multiple Fundamental Lines

Weighing the top event risk for the upcoming session, I will be watching the second day of the IMF's spring meeting. While there are a number of interesting presentations scheduled for the day, attention should be trained on the release of the Global Financial Stability Report (GFSR) and Fiscal Monitor (FM). This will relay the group's fears for what could unsettled the global markets and what contribution/detriment the world's governments (and their debt policies) will proffer to our future. Given the remarks through the opening day and Director Lagarde's unfiltered views on the state of play, there assessment is not likely to be encouraging. The real question for traders is whether these implicit and explicit warnings actually prompt action from market participants. They have been conveniently ignored for an incredible amount of time. It wouldn't be at all surprising if the speculative rank once again conveniently ignores the threats; but eventually, the risks will register with delay only building the probability of violence.

In the meantime, we can look to more regional fundamental developments for some localized volatility. The US has its own listings. This past session, the JOLTS jobs report reported its biggest drop in available positions in three-and-a-half years while the NFIB small business sentiment survey slowed from the previous month (though with less steep a decline than anticipated). The upcoming CPI reading and FOMC minutes cut closer to bone, but contributions to rate speculation have rendered relatively little market response of late. Far more interesting will be the event risk for the Euro and Pound. The former will host the ECB rate decision and the President's press conference soon after. Given the central bank announced its dovish turn at its last meeting with the introduction of the TLTRO III - with oppressively cautious rhetoric - it would be very unlikely to see escalation of those fears at this gathering. To escalate concern any further would insinuate a serious economic or financial threat which authorities would want to avoid at all cost. As for the Sterling, the EU-27 summit is key; which is saying something considering we have February GDP and trade among other statistics. The gathering of EU leaders is expected to rule on the UK's request for an extension to the Brexit. EU leadership suggested a delay beyond Friday's cutoff will be realized, but the amount of additional time is up to debate. We discuss all of this and more in today's Trading Video. 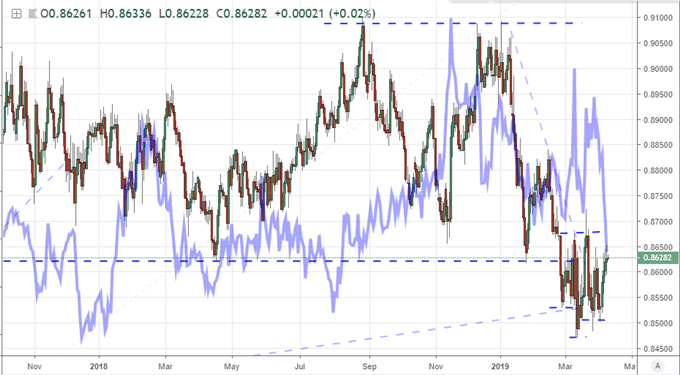