Once again, a benchmark of 'risk appetite' has produced a remarkable statistic that at first blush would paint a picture of extraordinary confidence in the capital markets. After a shaky start, the S&P 500 closed Monday with its eighth consecutive session's advance. That matches the same remarkable stretch of gains back in October 2017, July 2013 and January 2013. There hasn't been a nine-day or greater climb from this speculative favorite since 2004. Statistics alone should not artificially boost our confidence in the market's course. A quick look at the index's performance after the previous three equivalent series makes clear there is neither a 'lift off' phenomena nor a straight contrarian setup for impending and utter reversal. Yet, an 'eight-day rally' makes for an appealing headline - especially when the US stock baselines are so close to their respective record highs from September/October of last year. Yet, in the short-term the consistency of the recent climb hasn't translated into significant reach. What's more, the broader spectrum of 'risk' assets is acting like a sea anchor against conviction. The rest of world VEU ETF still stands at the midpoint of 2018's bear trend, emerging market (EEM) and carry trade (Yen cross index) measures are struggling, and sovereign yields are struggling to even set a floor. 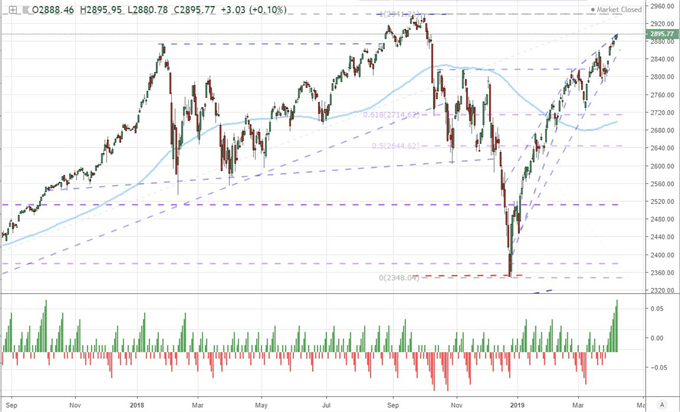 The other overbearing weight on the market's effort to sustain a bullish wave is the state of fundamentals. It is true that the investing masses can warp the collective evaluation of a matter or shift its focus to something more favorable; but eventually, reality will exact its toll. All three top themes that I've been highlighting these past months (the state of growth, monetary policy and trade wars) are active at the moment. Yet, one particular issue will likely steer the ship over the next 24 hours. In the wake of the disappointing developed world PMIs and sharp drop in the WTO's GDP forecast (3.7 to 2.6 percent) last week, the IMF and World Bank are due to update their outlook Tuesday. The Spring Meeting will begin with the WEO (World Economic Outlook). It is possible that the forecast improves, but such an update would fight a deepening concern against a wall of discouraging data while the markets have already priced in enthusiasm beyond what that could imply. Alternatively, the premium build up through the first quarter of 2019 makes us increasingly vulnerable to the dawning of recognition that the economy cannot sustain speculative exposure. While the focus should be on growth issues, don't forget that events like the ECB rate decision and EU-China summit ahead can quickly change the narrative. 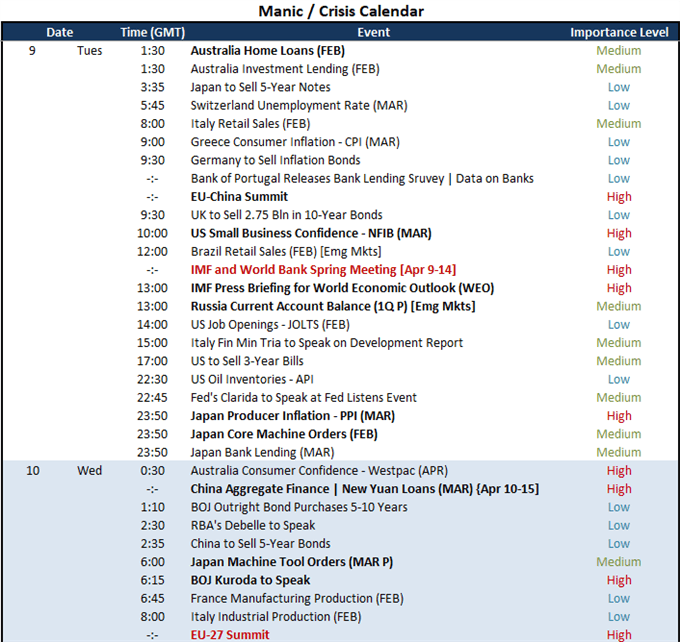 While US equities continued their steady march higher to start the new week, the Dollar took the occasion to slip Monday and further remove any illusions that a major bullish breakout was imminent. The trade-weighted DXY Dollar Index (and my own equally-weighted measure) were already some distance from their respective resistance levels, but the jog lower Monday added some measure of finality to the tempered short-term potential. The fundamental offering on the day carried minimal influence. The factory orders and final durable goods orders figures were both disappointing, but their growth implications were certainly lower than last week's manufacturing - or for that matter, service - sector activity updates. The slide seems to be as much a technical-motivated positioning as a counter-currency response. The Euro, Pound and Yen did ease higher on the day as collective alternatives revoking some of their previous contributions to the Greenback; but thosemoves were similarly tame. For the EURUSD, the charge above 1.1250 fulfilled a short-term, inverse head-and-shoulders pattern and subsequently lived up to the long-standing range conditions that traders have come to expect. In fact, retail FX traders were very confident of this outcome given the age of the pattern and the record low in longer-dated implied volatility measures (3-6 months). This boils down to what I consider a 'path of least resistance' break, and it will struggle to follow through on the technical spark unless something material shows up to support it. 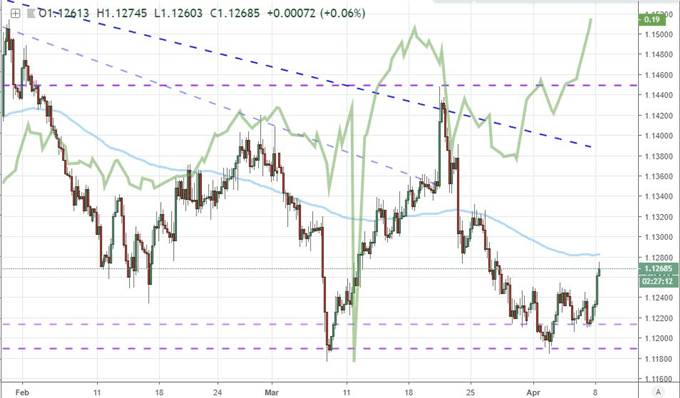 In the case of the EURUSD, the potential of a break higher (above 1.1600) is roughly comparable to that of a break lower (below 1.1200). That is to say that overtaking these levels offers little confidence that momentum would follow in their wake short of a scenario like a financial crisis. The same is not true of GBPUSD however. In this case, there is a slight probability advantage of the pair holding its month-and-a-half range low of 1.3000, but the risk in pursuing that view is exceptionally high. The most potent lift to the Sterling moving forward would be a clear path towards a soft Brexit. Given the nature of these strained negotiations, it seems unlikely that it would be resolved to the market's satisfaction abruptly. That said, the situation could certainly worsen suddenly. With the April 12th deadline in weighing in, we are reminded that UK Prime Minister Theresa May is trying to garner some support from a defiant Parliament and trying to convince EU leaders to approve an extension even though they doubt the good it would do. Looking to retail positioning, we can see they are either extremely confident in the range holding or a Brexit breakthrough coming along. Whether their motivations are technical or fundamental, that is a very risky view. 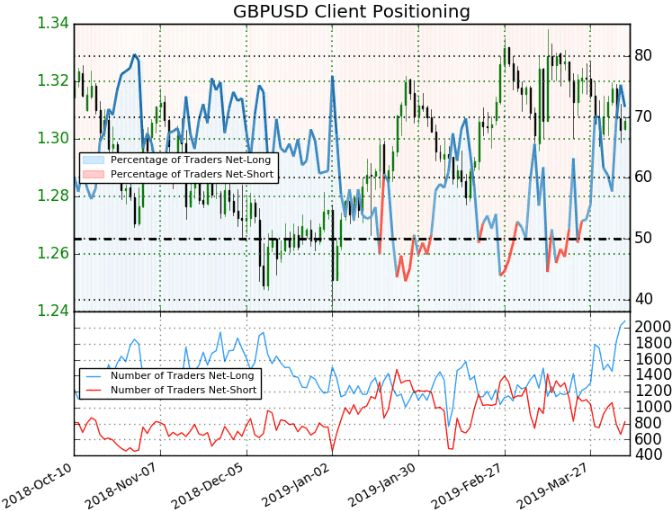 Typically, commodities are viewed as a growth-dependent risk asset. That connection makes for a very remarkable contrast in the backdrop for the global growth outlook and the performance of US crude oil prices. Despite the WTO's warnings last week and the lackluster picture from economic data of late, the commodity continued its climb up through the start of this week. If push comes to shove, demand will be crucial to the performance of this economy-dependent asset. For that reason, we should keep tabs on the IMF's updated forecasts. However, we also have the clear correlation between this particular asset and general risk trends, which continues to foster a speculative reach. Then there is the supply side considerations which it seems traders reach to when looking for justification to their preconceived bias. Monday, they certainly had something to grab hold of when the Trump administration announced it had designated Iran's Revolutionary Guard a terrorist organization. That will further fray the relationships of the US and OPEC member - and many other ancillary economies around them. Further, for the time being, the news would also carry enough heft to push crude oil beyond $64 and the 61.8% Fibonacci retracement of the fourth quarter tumble. 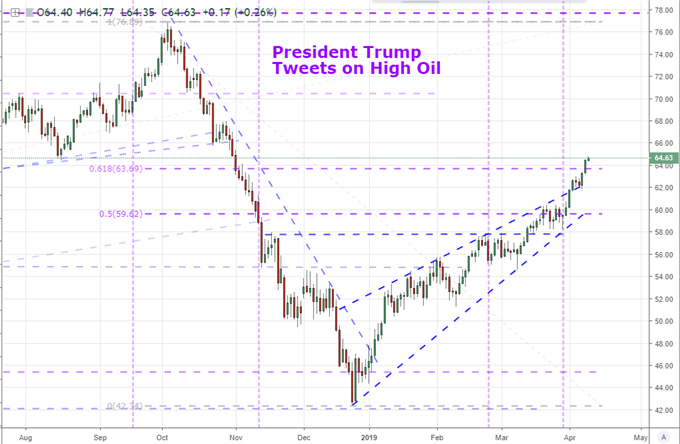 While crude seemed to foster a sense that there may be an avenue of hope for growth forecasts, most of the materials and agricultural commodities continued to track lower in established trends. Another outlier for the asset class Monday was gold. The precious metal managed to clear tight congestion over the past week with a move above 1,295. That didn't trigger a full-scale trend, but the relief from tight congestion on a 'neckline' to a large head-and-shoulders pattern was palpable nevertheless. This jump may have followed the Dollar's dip as much as anything else - and that is not a strong motivator for a bull trend. If risk aversion kicks in with the distinct sense that the central banks have run out of ammo to avert further unfavorable tides, we are likely to see the metal really come back into its own. For that gauge, a cross comparison to sovereign yields (an inverse correlation) would be a strong signal for more than just the metal's struggles. We discuss all of this and more in today's Trading Video.