Recession Concerns Not Yet a Market Panic, Dollar and Pound Face Struggle

See how retail traders are positioned in US crude oil as it holds 58, Gold as it revives its climb, GBPUSD as volatility rises, S&P 500 as it pauses from Friday's drop along with the rest of the FX majors and indices intraday using the DailyFX speculative positioning data on the sentiment page.

When markets closed Friday evening, we were in a precarious situation. Risk aversion was clearly under power to close the week, and there were plenty of troughs from which we could feed a sentiment frenzy if it began in earnest. The headlines late last week were clearly focused on the occasion of US Treasury yield curve (specifically the 10-year and 3-month durations) inverting. Although a wonky indicator favored by economists and fixed income investors, it has a strong precedence as a presage to recession. As far as 'reasons to worry' go, this is a fair and accessible one. Yet, there are a few considerations to account for when we consider taking this warning at face value. The more speculatively-appealing caveat is historical norm that previous inversions predated actual economic contraction in the United States by approximately a year. In the period between signal and economic pain, there has been strong market performance. More unique to our present condition is the fact that central bank activity has significantly skewed the natural course of yields with particular distortion between Fed hikes and the slow changes to its balance sheet. Neither of these considerations would lead me to rule out the risk of a stalled economy and financial pain however. I believe those are likely, but not to because of this signal.

Nevertheless, when the market is in a funk, any justification can be used to promote an escalation of fear. If left unchecked, we may have very well seen speculative trouble jump the weekend and pick right back up on Monday's open. Instead, there may have been a firebreak in an unexpected area: the conclusion of the US special counsel’s investigation into Russian interference in the US Presidential elections in 2016. Frequently the source of heavy political drama, this doesn't carry much of a reliable impact on financial markets on most days. Yet, the risk that there could be accusations that the Trump administration was participant to the interference could raise serious political stability risks that in turn raise serious concerns over open issues such as government funding, fiscal spending programs, trade relations and more. When it was reported Sunday that there were no findings of collusion, there was a sense of relief that another fundamental quagmire would be opened. This does little to alter the issues around growth concerns or other systemic frets, but it can at least steal the oxygen from panic for now. From the range of high-profile themes to keep track of as market-wide influence, monetary policy will be the most reliable source of white water. We had a run of Federal Reserve, European Central Bank and Bank of Japan policy official remarks this past session - all of it leaning heavily dovish. There is plenty more scheduled over the coming days. 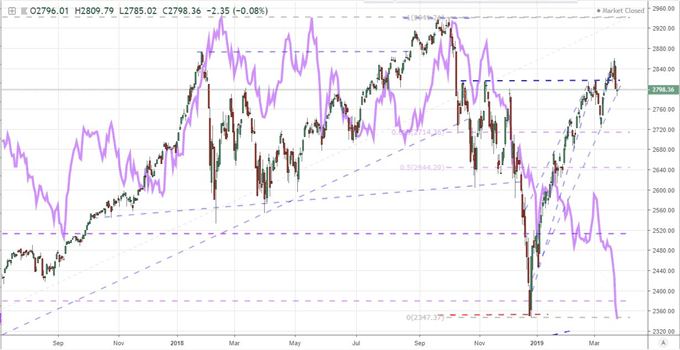 From the Dollar's perspective, many of the headline concerns may be interpreted as a threat to general risk trends, but they hold explicit ties directly to the US. At what point do we see the Dollar specifically burdened by this fact? The yield curve inversion that has been seized upon is in the US Treasury market so the recession warnings could be more specifically directed. Political risks may not have set the US on course for a constitutional crisis with the executive branch, but it serves as a reminder of the many other points of tension born from the Trump administrations' efforts - such as the trade war. Speaking of, the rhetoric around the US-Chinese negotiations have unmistakably worsened and the threat of a US recession will draw more scrutiny over what impact this standoff could produce. Even the Fed's monetary policy intentions draw a hefty debate on whether the Dollar remains buoyant because it maintains a yield advantage or it drops due to the fact that it has more premium to lose. What theme will the currency follow? That isn't clear; and until it is, efforts to establish a clear trend could be defused before they ever gain traction. That was the case with EURUSD just this past week. Don't be surprised if we see more such false starts until we are set on a clear fundamental path.

In contrast to the Greenback's abundance of possible motivations, the Sterling is distracted by a single issue: Brexit. We entered this week with another upheaval in possible courses this long divorce proceeding could take. We are looking for a vote this week on whether Parliament will approve the Government's (Prime Minister May's) Brexit proposal so that the EU's extension can be explored in full. That said, May said Monday that she could not garner enough support in the House and that a vote would not be held on Tuesday. To add to the complication, it was reported later in the day (after I recorded the video) that Parliament had voted to seize control over the Brexit process. That was an expected shift of power, but it came earlier perhaps than many had expected. Regardless, this does little to offer a clear path on an outcome for the Brexit standoff. If no deal is struck this week, then the decision may be forced by April 12. An agreement will earn an extension out to May 22nd before EU Parliamentary elections begin. Discussions of an indicative vote, whereby Parliament decides amendment by amendment the direction to take, has been suggested; but that will bring its own set of concerns. Pound will remain a 'put upon' currency with considerable risk in committing to any specific view, bullish or bearish. Expect volatility but with little commitment to serious breaks or trend until Brexit is clear. In the meantime, retail traders seem to be approaching pairs like GBPUSD with the appropriate strategy: range trading. While it may not be a full appreciation of the fundamental risks at play, the proper approach for the wrong reason can still result in a positive signal. 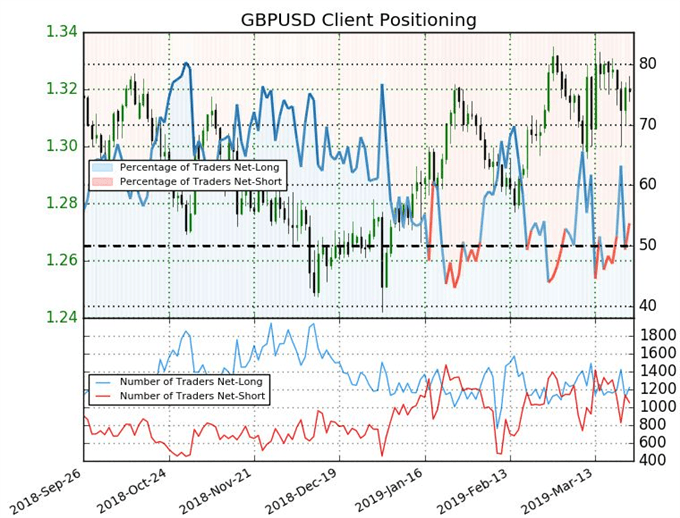 Euro Looks for Its Motivation while Kiwi Is Clear In its Own, Will Trump Tweet on Crude?

Where the Dollar and Pound have relatively clear fundamental influences - even if there is a confluence to sort from with the Dollar - it seems the Euro is struggling to find its commitment. There are plenty of concerns stacking up behind the currency, but it seems preternaturally able of avoiding its local concerns. The ECB's re-introduction of the TLTRO so soon after the end of QE, the painful hit to the March PMIs last week and Italy's steady pressure on the EU's cohesion with the most recent tension added through the Belt and Road signing with China are serious burdens with remarkably little influence on relative performance for the shared currency. That said, I wouldn't put too much conviction behind the Euro's ability to cater to troubled counterparts as a viable currency to pain majors. Ahead, the German consumer sentiment survey (GfK) and ECB policy officials' rhetoric will give localized interests while trade wars and Brexit fallout remain proximate concerns.

With a market backdrop that struggles for committed trends and most majors dealing with overlapping issues, there is virtue in a restricted focus for those markets that are so fortunate. The New Zealand Dollar has proven itself divorced from most systemic influences that typically establish its trends. That sets the RBNZ rate decision Wednesday morning up for an undistracted release. That doesn't ensure it will provide a surprising outcome, but it will at least mean we don't need to consider all possible outlets for tracking its commitment. A dovish outcome and retreat would be the path of least resistance for the likes of NZDUSD, NZDJPY, AUDNZD and NZDCAD but circumstance will dictate its performance. As for the Australian Dollar and Swiss Franc, the disconnect means a total lack of scheduled market drivers. That can make for ideal counterpart currencies that won't conflict with more overactive counterparts. Then there are commodities. Gold has rediscovered its buoyancy as economic uncertainties are met by aggressive response from global central banks that are inadvertently (or purposefully) hurting local debt, capital markets and currencies. As for crude oil, the market has lost its bullish momentum but it is holding firmly above 58 in the WTI us crude market. That is seemingly above the US President's threshold for comfort. Will the passing of the special counsel’s investigation free up his attention to weigh in on the commodity again? Be wary of volatility, but don't expect full trend to arise unless risk aversion or economic retrenchment kick in in earnest. We discuss all of this and more in today's Trading Video. 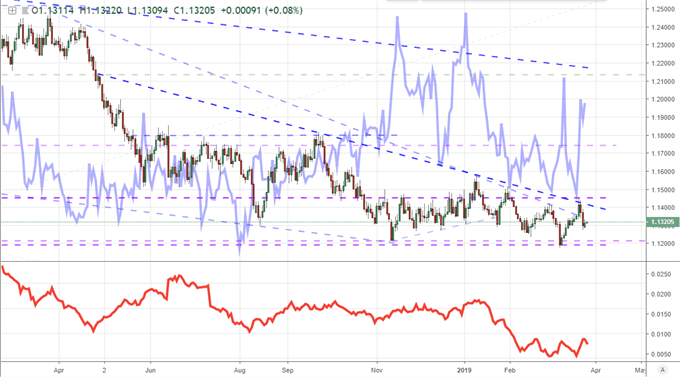