See how retail traders are positioning in EURUSD after the break, GBPUSD between Fed and Brexit, Gold as it plays unique safe haven along with the rest of the FX majors, indices, and oil intraday using the DailyFX speculative positioning data on the sentiment page.

Risk Trends Bounce But Is It a Monetary Policy Lift?

There remain a few dominant fundamental currents that could reasonably be expected to carry the broader capital markets to reliable trend. Are any of them carrying the torch for serial bulls to carry the benchmarks of sentiment back to their multi-year or record highs? The most prominent thematic driver thus far in the week remains the support assumed in global monetary policy. Serious concern followed the Federal Reserve rate decision Wednesday when the Dow Jones index and S&P 500 closed lower on a day the Fed offered an unmistakably neutral/dovish shift. With the median rate forecast among the FOMC members now projecting no change to the benchmark rate range in 2019 (and only one 25 basis point move in the subsequent two years) while the quantitative tightening effort to reduce the balance sheet has been scheduled to level out in September, the world's largest central bank - and one of its most hawkish - was once again offering tacit support for speculative interests. So why has the formula for 'more stimulus equals more lift in risk assets' broken down? If Thursday saw another slide in these and other risk assets, it would have likely set fears alight that none of the external influences that had fostered complacency and moral hazard in the past could carry us further. That would hasten the eventual reversal. Instead, Thursday saw some modest lift for most speculatively-sensitive assets - with a notable contradiction from government bond yields. That does not assure central bank support can return record highs, but it does maintain an air of potential. 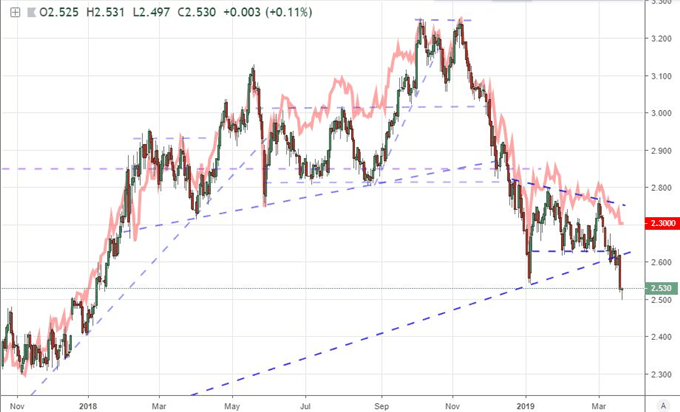 While monetary policy is still offering some active leverage to risk considerations and trade war concerns are slithering just beneath the surface, we have a very clear thematic risk in growth concerns over the final trading session of the week. Expectations for economic stagnation have gained traction these past weeks with the Fed's GDP forecast downgrade in the SEP (2.3 to 2.1 percent in 2019) along with familiar warnings from the ECB bulletin and BOE policy statement this past session adding troubling winds to the market's sail. Yet, despite the clouds, evaluations of value continue to avoid the systemic troubles. That may be difficult to do if the forthcoming run of March PMI figures signal an unmistakable slowing. These indicators are not as broadly based or statistically comprehensive as the governments' quarterly GDP figures, but the correlation to the official figures are unmistakable. That makes them far more timely updates on a critical measure of the financial system and its economic foundation. What's more, we are awaiting updates from Japan, the Eurozone and United States - essentially the globe. A series of encouraging updates could beat back the dark but further slide into the general quiet of economic activity would likely undermine the uneven speculative drive.

Refocusing away from universal sentiment to more regional interests, the Dollar's immediate response to the Fed's tone Wednesday was straight forward. Yet, with the Dollar leaning heavily on trendline support and its 200-day moving average to start Thursday, the currency put in for a hearty bounce as US liquidity returned. Considering Fed Fund futures and swaps had already banished the prospect of any rate hikes through the end of the year (in fact, they were pricing in a hearty probability of a cut), it stands to reason that the market had already priced in this policy swing and more. The basic carry considerations accounted for, the Dollar's medium-term fundamental course still looks to be bearish with a downgrade in growth, refreshed troubles in trade relations and a sensitivity to the turbulence in risk trends. That said, the immediate outlook holds less provocation which isn't particularly unsettling for most of the 'majors' (Dollar-based). Few of those pairs were on the cusp of major technical developments much less fully committing. The exception was EURUSD. With one of the narrowest 60-day historical ranges in the pair's history, the break above 1.1365 that followed the Fed decision was difficult to miss. The fade from liftoff Thursday now puts this active development in a state of limbo. Is it a breakout with intent or just the victim of volatility in too small a technical span? Unless the Greenback starts to catch fire for some other reason, the opportunity may dry up before it even started. 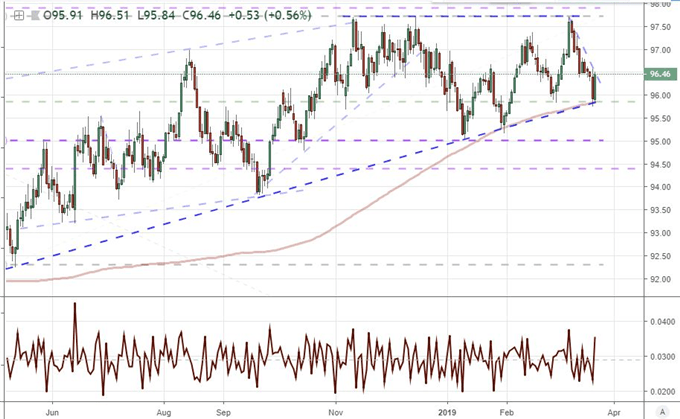 Of course, when looking at a currency pair, there are two perspectives that are contributing to the forecast. EURUSD could begin its climb in earnest if the Euro were to take off in its own right. That would be quite the feat however given the fundamental backdrop. The relative monetary policy stance from the ECB shows the currency has as much to lose (2017's premium build up and just at the beginning of its transition from expanding stimulus) as the Dollar. The European Central Bank's economic bulletin released the past session offered a familiar report of concern over the outlook. The upcoming Eurozone, German and French PMIs will offer considerable weight to those concerns, or refute them. In the meantime, another open-ended risk is starting to wear on the world's second most liquid currency. Brexit negotiations are primarily considered a Pound risk, but they pose just as much trouble for the Euro through existential cohesion and certainly economic fallout. The first day of the EU Summit weighed extension of the negotiations period with some hopeful timelines. That may forestall the full impact for the Euro as much as the Pound. 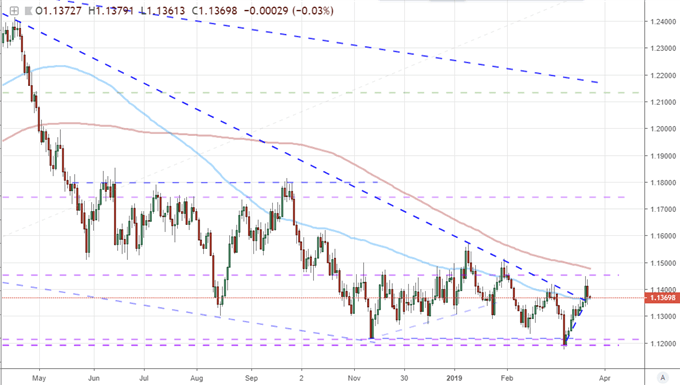 According to reports following the first day of discussions at the EU summit, agreement on extending the Brexit deadline past the initial March 29th Article 50 deadline was offered readily. According to the draft statement, it was suggested that the timeline could be moved back to May 22nd if UK's Parliament agreed to the withdrawal agreement worked out between Prime Minister May and EU negotiators in November. With that offer, officials stated that there would be no revisiting the terms that were already hashed out. That could be difficult to muster given the gridlock in the Commons. Later in the day, it was suggested that an 'unconditional' extension out to May 7th is a possible alternative. As we wait to determine what date to reset the clock to, uncertainty continues to manifest in tangible pain. According to a report by EY, financial services in the UK are planning 1 trillion pounds in capital transfer to the EU and the relocation of 7,000 jobs. That is troubling for an industry that they suggest accounts for 12 percent of GDP. The Sterling remains under pressure, but that does not mean it will simply drop. Instead, expect considerable volatility with a characteristic lack of consistent direction. In fact, intraday Thursday, the CBOE's Pound volatility index hit its highest level since July 2016 (the aftermath of the initial Brexit shock) as the currency dove across the board. 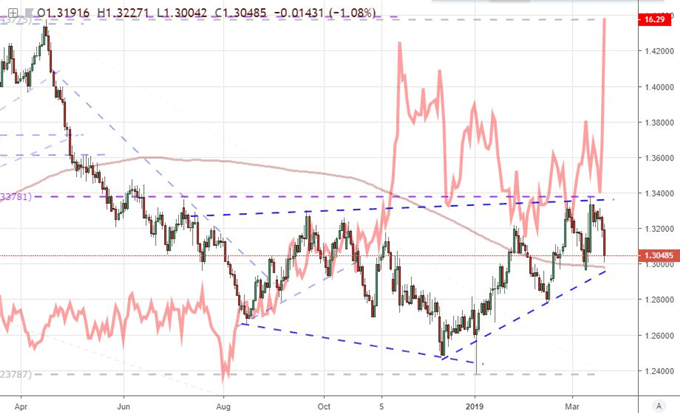 There is value and opportunity in looking outside of the constantly unsettled majors. Such currencies may not be waiting with bated breath for an overdue fundamental wave, but they can move without restriction through cross winds or offer a more reliable volatility response to targeted event risk. The Swiss Franc this past session was stirred by the Swiss National Bank (SNB) rate decision, but the lost traction from this group's efforts alters little. Keep tabs on the likes of EURCHF, USDCHF and CHFJPY. The New Zealand 4Q GDP figure charged the Kiwi Dollar Thursday morning, but the in-line figures wouldn't earn a critical bullish breakout. The same was true of the uneven Australian employment data (fewer jobs added though the jobless rate ticking down to 4.9 percent) in its impact for the Aussie Dollar. Another market to keep close watch on volatility is crude oil. The commodity extended its slow climb to overtake the midpoint of the fourth quarter tumble and explore the air above $60 during the active US session. Interestingly, the conversation in commodity trading circles as the market rises is 'when will President Trump cast his gaze upon the market once again?' There have been a number of instances over the months where the President has weighed in on the commodity - particular with specific language seemingly meant to jawbone oil lower. Looking at those tweets over the past 9 months, it seems that he may freely weigh in anywhere above $50 or $55. We will see if that standard holds true as we are clearly above the threshold. We discuss all of this and more in today's Trading Video. 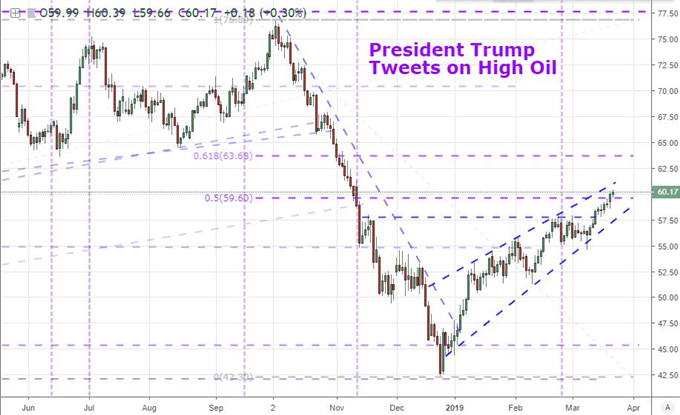