S&P 500 Jumps on News of Trump's Trade War Delay but Where's the Follow Through?

Everything considered, it seemed the market received a meaningful reprieve from one of the most persistent and expansive financial threats plaguing the market these past months. Yet, you wouldn't know it if you were just following price action alone. Sunday, US President Donald Trump followed upon the positive rhetoric surrounding the US-China trade negotiations through week's end by announcing that he would delay the scheduled increase in taxes (from 10 to 25 percent) on approximately $200 billion in Chinese imports. The implications of that move were grave as the economic damage they would impose would only account for a fraction of the momentum that would follow with serial retaliations.

With the announcement, there was a notable shift in financial headlines and benchmark equity indices like the S&P 500 and Dow - as well as other leveraged risk assets like the EEM emerging market ETF and junk bonds - opened to a sizable opening gap. Yet, the charge didn't seem to offer much beyond the opening jump. There was no follow through to speak of in equities or other exposed markets. It could be said that this is perhaps due to a lack of finality to the situation (it is a delay), which is likely partially true. I think the more substantive discount to this news is to be found in the climb from markets through the past few months.

The recovery in spite of the unresolved trade war countdown suggests markets were discounting an 'inevitable' delay or breakthrough. If this is the case, perhaps all the good will it could engender for bulls is already spent? Instead of being led by hopes of relief rally, we are now dependent on more quantifiable and evident themes. If that is the case, the state of economic activity, monetary policy, rates of return and other environmental factors are not exactly inspiring of a return to record high, much less beyond it.

While there are multiple fundamental themes unfolding at the moment (trade wars, growth forecasts, monetary policy tide changes), the Brexit situation brings with it a little more urgency. That is because we are dealing with a very explicit time frame. The Article 50 period for which the United Kingdom can work out its withdrawal plan for approval from its European Union counterparts is due on March 29th. Yet, we are infamously heading towards that date without an agreement from the two parties. This week, we had on the docket a key date in February 27th (Wednesday) where Parliament would make a 'meaningful vote' to evaluate the progress made on the split.

Yet, recognizing the lack of progress in the affair, Prime Minister Theresa May announced over the weekend that she would push a vote on the next Brexit plan ahead to March 12 - just two weeks before the planned withdrawal. That would seem to put the situation on ice and fuel fears that plans should be implemented by market participants to avoid a no deal 'accident'. However, we should not presume that this matter has been shelved. Parliament is still due to debate the situation this week, and pressure has flared from both sides of the government. It was reported that May was being pushed by top cabinet members to step down in May, that members of her party were demanding a commitment to avoid a 'no deal' outcome and that Labour party support for a new Brexit referendum was building.

There is considerable risk around this event, but only a fraction of it is accounted for in the expected volatility indies. Not even the Sterling's proximity to multi-decade lows likely fully accounts for what is at risk. As for the Euro's exposure or global liquidity risks should the derivatives market feel the reverberations of London's disconnect, we are not even seeing a surface level appreciation. 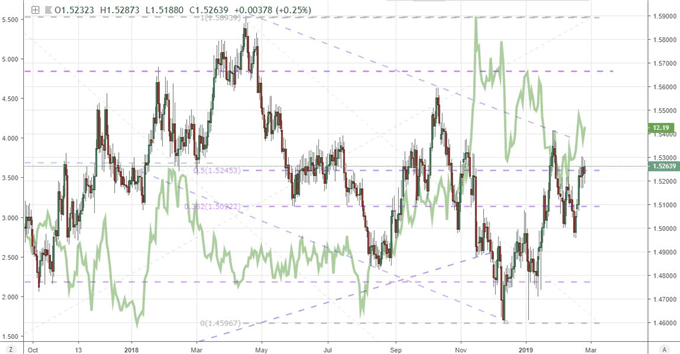 Top Markets to Watch Ahead: Dollar with Powell Testimony and Euro an Underappreciated Brexit Exposure

Aside from the widespread themes, there are a few regions that are more exposed to volatility moving forward than others. Pound and Yuan included, the US Dollar is arguably the most potent major currency for volatility moving forward. Not only does this currency play a critical role as an absolute safe haven and at the center of the trade war expansion, but it is also the primary alternative to the world's other most liquid currencies. More localized, interest in the health of the US economy will prompt Dollar speculation this week.

Already a topic that we navigate to from otherwise abstract considerations, we are returning directly to the root of the situation with Monday's Chicago Fed National Activity survey. The report reversed sharply in January with a -0.43 reading, something that bodes poorly with the reference in PMIs and other timely reports. The long-delayed 4Q GDP update due Thursday will offer a sense of scope to the general discordant feeling thus far. In the meant time, the US Consumer Confidence survey and housing data and Fed Chairman Powell testimony before the Senate Tuesday will cover important scale of a multi-faceted benchmark. Another currency that should be monitored for its own issues as well as an underappreciated sensitivity to the more pervasive, global themes is the Euro.

Ahead, we have updates like the Euro-area sentiment surveys and this past session, Italy's Finance Minister warned the economy was currently between stagnation and recession. My greater concern is that the Euro is pricing in much less of the Brexit, trade war and universal risks than the likes of the Pound, Dollar and others. If you are looking for a currency with far less complication, consider the Australian or New Zealand Dollars which have event risk but are as not as anchored to the systemic these past months. We discuss all of this and more in today's Trading Video. 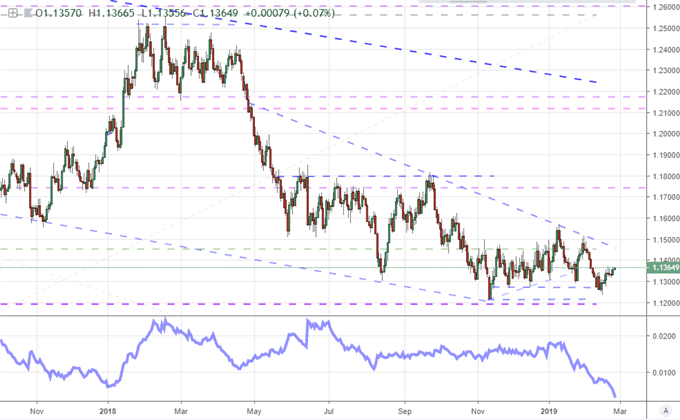