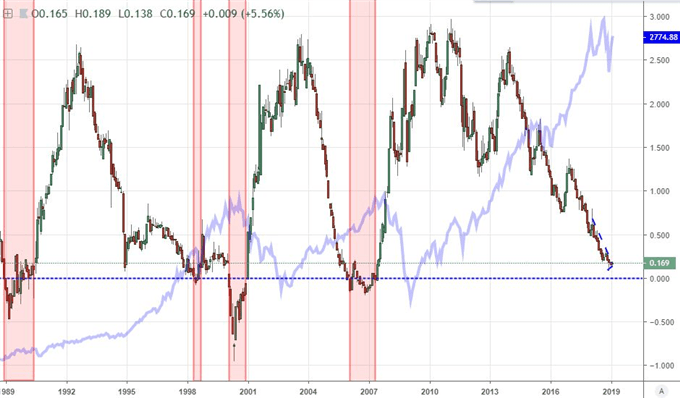 The Limits to Leveraging Trade War Relief, Including Recession Fears

When it comes to threats we can see and those that we merely fear are lurking on the periphery, the speculative masses will usually focus on the latter. That is especially true against the backdrop of this past decade where complacency (holding out for risk to continue it climb regardless of where it draws motivation) seemed the high virtue of investment. At the moment, trade wars is the known risk to economic health and financial stability. It has elevated implied (expected) volatility and weighed ebullient risk assets as the bill for US and Chinese goods with tariffs on them ballooned to over $350 billion. Yet, where it has been a source of concern, it has also proved an opportunity for relief - the most appealing motivation for short-term speculative appetites.

This past session, the path towards a breakthrough seemed to wind closer to a clearing with the reports that the discussions between high-level officials from both countries was producing five specific MOUs (Memorandums of Understanding) including a commitment on the Yuan. This is a good sign as specific milestones suggests clear lines for which the two sides can delineate as targets to find compromise rather than abstract and unrealistic demands. In the meantime, President Trump's rumination over the Commerce Department's auto import report (he has 90 days to consider) is keeping investors from leveraging a speculative run on 'relief' alone.

Another check to this 'buy the dip' mentality is the unmistakable economic toll suffered thus far. We were reminded of this steadily deflating fundamental balloon this past session through economic data and sentiment surveys. Global PMIs (Japan, Australia, Europe and US) all showed a drop in manufacturing activity reports with their most recent run. We have seen many references to the inverted yield curve, trouble in Germany, the threat of tight monetary policy all as possible cues of impending recession. Add to that list the Bank of America Merrill Lynch credit investor survey which signaled a global recession as the primary concern.

For regional fundamental developments, the three most liquid currencies offered important updates and are likely to deliver another wave through the final session of the week. Yet, they are just as likely to see any intent checked by recognition that commitment to the deep currents will be extremely difficult to muster with far higher profile events due across the globe in the week ahead. For the Dollar, the DYX was little moved, but an equally-weighted measure showed a modest bounce back into a well-traveled range.

The manufacturing PMI hit a 17-month low, existing home sales hit a three year low and ratings agency Fitch lowered its retail sales growth forecast for 2019 (to 3-4 percent). A jump in Bloomberg's weekly consumer confidence report owing to the end of the shutdown doesn't really speak to real enthusiasm. Nor does the range of Fed speakers we have on tap for Friday. Powell's testimony to Congress and the 4Q US GDP next week are far more prominent.

For the Euro, the news and data was more remarkable this past session. The ECB's minutes showed the central bank was concerned about the future and was investigating the possibility of pursuing more stimulus should it be needed in the future. Fears of a Euro-area recession were seeded again by contractions in the manufacturing updates from last month. ECB President Draghi's remarks today and business sentiment from Germany will hit the same nerves, but they are just as unlikely to force a late-in-the-week, critical breakdown from the equally-weighted Euro index support we have been keeping close watch over. 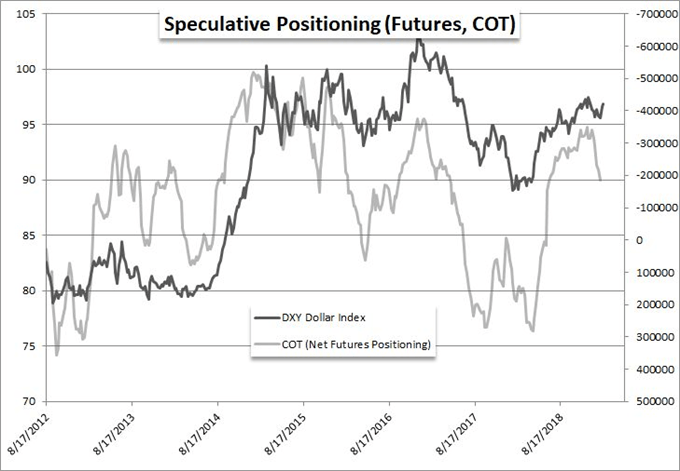 Where there are loaded expectations for certain fundamental themes for the Dollar, Euro and Pound - whereby it is very difficult to override inertia - certain other currencies are not so locked up waiting for the big tsunami. That allows for a little more volatility when headlines do develop. The Australian Dollar was a big mover through Thursday, dropping back towards rough support for AUDUSD and on an equally-weighted basis chart. What confused some was the top data report seemed to cue a notable improvement as the country added 31,900 jobs through January - more than was expected and all in full-time positions.

Yet, news that China was taking some initial steps to curb Aussie energy imports as diplomatic relationships grow strained signaled exactly what the biggest economic factors are for the Aussie Dollar. The Canadian Dollar was another reasonable currency for response. The Bank of Canada Governor Stephen Poloz remarked that interest rates still need to rise to neutral 'over time' which is more commitment to a hawkish policy - even a distant one - than what we are seeing from the likes of the Fed, ECB or BOJ at the moment. The Loonie response was modest, but it can readily gain traction should the market put the emphasis on relative monetary policy once again.

In commodities, the resuscitated bullish charge after the lackluster break of the inverse head-and-shoulders pattern earlier this week has once again stalled. The unfortunate stall in an otherwise productive technical move has plenty of supply-side headlines that it can draw from, but there is little to discern the pick-and-chose mentality applied to these reports over the past months. Instead, I would put more emphasis on the correlation this performance draws relative to the S&P 500 and general risk assets. Looking for a truly remarkable move inthe raw material space, gold made an unmistakably intense retreat. The metal posted its largest drop since November 8th and its sharpest retreat since October 8th when priced in an index of Dollar, Euro, Pound and Yen. We discuss all of this and more in today's Trading Video. 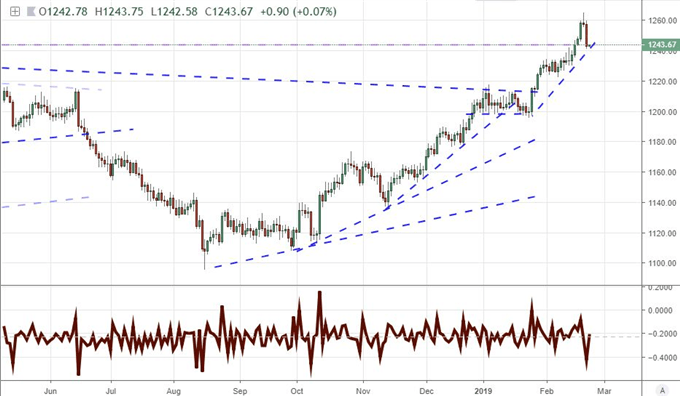