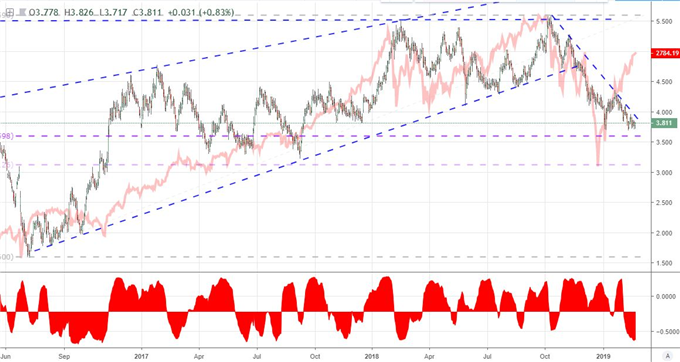 Trade Wars and Monetary Policy Compete for Control Over Sentiment

There are multiple themes actively drawing the attention and caution of the global markets this week. Trade war headlines thinned out this past session from the many reports digging into the US Commerce Department's delivery of its auto imports investigation Sunday and Monday, but the specter that President Trump may announce tariffs on key trade partners (particularly EU nations and Japan) with little or no warning haunts investors attempting to rediscover the steadfast bull trend of previous years. This will simply need to remain an open threat that market participants keep active watch for as the economic and financial implications for the world are severe.

In the meantime, this theme may swing back into the bulls' favor as discussions are scheduled to pick back up between high level US and Chinese officials. Last week's progress report from Trump and confidence from unnamed sources that a breakthrough was near still paints the outlook in a rosy light. Updates that signal a rollback in tariffs (and avoidance of the March 1 rate increase) would provide a foothold for recovering lost group, but pacing thus far suggests there is far more to lose should talks talk a turn for the worse. Meanwhile, another familiar theme is attempting to take the torch for charging risk trends towards a more comprehensive recovery.

The FOMC minutes this past session offered up a more explicit picture of central bank's plans to back off from its 'hawkish' normalization efforts. That taps a well-worn risk theme over the past decade whereby monetary policy backstop spurred speculators to otherwise impossible levels of speculative conviction. Does it still have the power to push fresh record highs in benchmark assets? I doubt it, but that doesn't mean they won't try.

Despite Its Restraint, EURUSD Is Not Safe from an Inevitable Breakout

It is easy to peg EURUSD as a range-trade vehicle. The benchmark pair has carved out one of the smallest three-month historical ranges (as a percentage of current spot price) in the Euro's history - and even before its official trade. As practical as an approach as measured swing trades may be, it is inevitable that we break from the pair's restraints. The question that we need to ask when trading the pair is what fundamental catalyst has the capacity to establish a clear break. For the Dollar's part, the past session's FOMC minutes proved far more remarkable than I had anticipated.

The January rate decision was not one of the definitive events for which we were expecting the typical quarterly accoutrement, but Chairman Jerome Powell's press conference offered more insight than we normally receive 'off quarter'. Yet, what the Fed Chair offered through insight didn't fully prepare the markets for the shift the Fed was taken in its collective view. According to the official transcript, the central bank was still open to the possibility of 2019 rate hikes, but its true intent was made clear when the report indicated "almost all" of the members agreed the balance sheet reduction could end this year and a plan for that cap should be released soon (that will make the March decision even more important).

Ahead for the Dollar, the PMIs figures will offer good proxy to February GDP and Fed intent should garner speculative interest, but we won't see overt traction. Instead, for EURUSD, the fundamental responsibility will likely shift to the Euro. This past session's consumer sentiment survey showed an uptick over the past month's reading, but the -7.4 figure is far from encouraging. Ahead, we have the region's own PMI statistics, but it is the ECB's updates (2018 financial statements and the Governing Council's January meeting minutes) that carries the real weight. Keeping in mind the premium - particularly in rate speculation - afforded the Euro, it is important to weigh the potential between bullish or bearish breaks. The Euro is likely to experience far more impact in the latter. 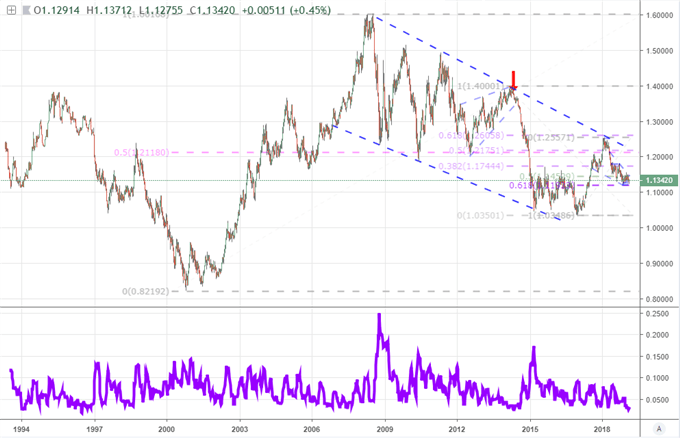 There are a number of remarkable, structural conditions shaping our broader financial system. One of the most remarkable environmental factors at play is the level of activity. As mentioned through the EURUSD ATR, there are priced based figures, but the implied (expected) volatility readings deserve as much attention as anything else. In risk assets through this past session, we still see the passive advance we have witnessed unfold for weeks and months. Yet, when we refer to the S&P 500-based VIX index, we find a desire to revert back to the circumstances of 2017, 2014 or 2012. Traders in these previous eras didn't need a common source of strength, they simply found it through the collective bid. That drop in uncertainty seems to have come roaring back as the favorite VIX index has dropped to its lowest level since October 3rd (the transition into one of the hardest hit slumps in recent history) while the Volatility of Volatility Index (VVIX) sunk to even more extreme levels.

The pliability of volatility was the lowest - at least in perception - since May 21, 2015. That is the epitome of complacency, so find no confidence in this update. Questionable risk trends sets one clear imbalance of risk/reward for risk assets, but it is worth also delineating what that means for different asset classes. I would watch the Dollar and Yen-based carry trade closely for the FX response. Equities are fairly straight forward but the commodity set inherently involves more nuance. US-based WTI crude oil climbed this past session to secure a 7-day advance (one of the largest back to 2010. This charge does clear a 'neckline' in a reversal pattern, but break and follow through are very different beasts.

Perhaps even more appropriate as a commodity weather vane is gold. The precious metal has posted an epic climb these past few months, but its bullish run seemed to waver in both Dollar and broad currency terms. If we add risk aversion or inflation concerns to the equation, gold will be an eve more appropriate outlet. Then again, we don't need those additional sparks when global governments and central banks are taking concerted efforts to deflate their currencies. We discuss off this and more in today's Trading Video. 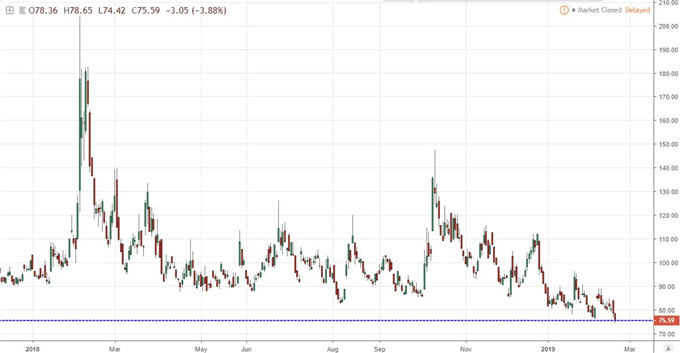