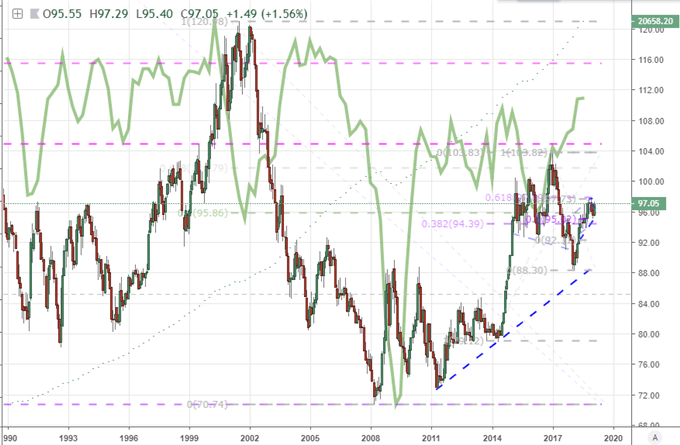 Much of the recovery that we have seen in US indices and other risk-sensitive assets over the past six to seven weeks seems to derive much of its conviction through the alleviation of various lines of 'impending doom'. Yet, unburdening the market's sense of fear that conditions may be worsening does not translate to the same reality whereby new opportunities and projections of genuine growth or return can raise the value of already-expensive assets. We find the market is showing clearer recognition of this distinction. On the positive side of the balance, the bipartisan US government financing bill passed through the Senate and the path to full adoption looks promising. There is still the lingering risk that the President vetoes and the US returns to a partial federal government shutdown, but the risk is seen as significantly lower. On the trade war front, rumors were working overtime with the US supposedly considering a 60-day extension on the tariff hike freeze after March 1st and China attempting to woo its angry partner with vows of a sharp increase in spending in US exports. Then again, a Bloomberg headline relayed sources' concerns that the two countries are still 'far apart'. What's more, there is another level to international relationships that is showing tension rise. To the consternation of the US and UK, the European Union placed Saudi Arabia on a blacklist for money laundering and terror financing; while the US Vice President called on the EU to withdrawal from the nuclear deal with Iran. Though these issues seem unrelated to traditional trade concerns, they will very likely factor into the United States' decision on its open auto tariffs considerations. More overt in its restriction of investor enthusiasm is the continued slide in global growth signals. Soft 4Q GDP figures from Japan and Germany along with a sharp drop in US retail sales adds weight to more fringe measures of economic concerns.

Much of the motivation that contributed to the DXY Dollar Index's longest bullish series of daily gains since mid-2016 through Tuesday has been found through indirect means. In other words, the market is less enthusiastic about the Dollar's bullish qualities and more motivated by the active distaste for its major counterparts. That 'alternative' value is still in place given recent event risk and themes, but an indirect motivation rarely provides the degree of lift necessary to override more tangible, domestic concerns. The developments from the US docket were heavily skewed towards the bears' interests. In contrast to the silver lining of the previous session's record job openings report, expectations for faster wage growth - and in turn consumption - cooled with the report of December retail sales. Delayed by the US government shutdown, this report (accounting for some three-quarter of US GDP) posted a severe 1.2 percent drop for the month, while the measure excluding autos was even harder hit with a 1.8 percent tumble. That is the sharpest decline for this series in nine years and adds quantitative weight to the otherwise downplayed sentiment surveys these past months. The lead up to the delayed 4Q GDP release (due February 28th) is looking even more troubled against the Atlanta Fed's own GDP estimate - also delayed by the shutdown, so for the fourth quarter - cut its reading for the world's largest economy from 2.7 to 1.5 percent. Coming up, expect the University of Michigan's consumer confidence survey to draw more attention than usual, for better or worse. 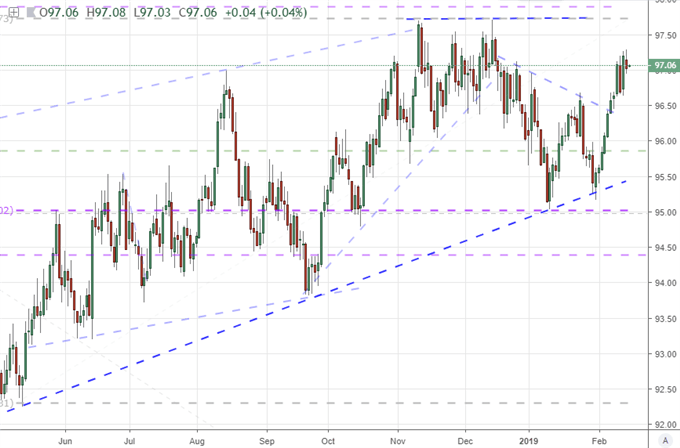 The fundamental backdrop wasn't particularly reassuring for the major European currencies this past session. Given the context, the Euro's updates were the more novel issues. The Eurozone 4Q GDP reading offered a greater sense of stability than what we were left with in the Italian statistics for the same period (the region's third largest economy tipped into a technical recession). The region grew a very restrained 0.2 percent through the three-month period which set the annual pace to 1.2 percent expansion - both meeting expectations. A more troubling signal for the region's future is Germany's stalled fourth quarter. Against expectations of a 0.1 percent growth, the country registered a 0.0 percent figure which does not pair well with the previous period's 0.2 percent contraction. Despite the building pressure on the Euro from growth, trade and monetary policy perspectives; an equally-weighted reading of its performance held the critical support level it has fostered for the past year and a half. That same restraint wasn't present for the Pound. Parliament was up for debate on Brexit and Prime Minister May's efforts since the last meaningful vote. The outcome for this event was fully expected, so the repudiation of Theresa May was not exactly surprising. Yet, it does remind us of the uncertainty Pound traders will have to continue to bear, subsisting on headlines for Sterling movement until we get to the next critical date in this divorce. The February 27th Parliament session is expected to be our next critical steering where the targets and approach may change. 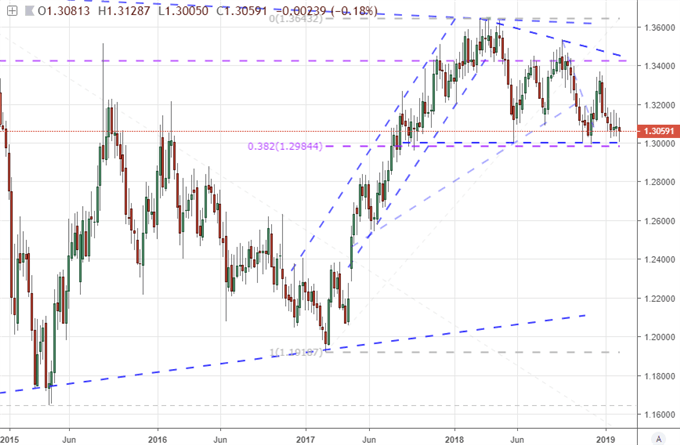 Where the Fundamental Drive is Losing Traction

As could be seen in the Dollar, Euro and Pound, there is a certain degree of disconnect from critical fundamental themes and the progress for these major currencies. That said, there are currencies whose commitment to domestic developments is even more lax. The New Zealand Dollar has proven one of this past week's most remarkable movers. The Kiwi extended its climb this past session following a neutral RBNZ guidance that soothed the growing dovish view around the central bank and currency. How long this drive lasts is likely dependent on how much crosswind we find in selected counterparts. GBPNZD for example is unlikely to keep its pace as Brexit is a near-universal anchor. I am looking more closely at AUDNZD and NZDCAD. Speaking of the Australian Dollar, the impact of the past week's RBA rate decision (a bearish catalyst) didn't seem to make the consumer inflation expectations update any more market moving. Perhaps it was owing to the setup in the data (3.7 from 3.5 percent pace) that did more to stall further losses. Perhaps that put it back to neutral. Meanwhile, the Japanese Yen showed little-if-any genuine response to the 4Q GDP figures out of Japan. No surprise there, as the pair is tethered quite explicitly to risk trends in large part due to its extreme monetary policy stance. Further, emerging market currencies were under pressure, but USDMXN – which I have taken a stake in – was looking instead to check back from full commitment to its range swing. We discuss all of this and more in today's Trading Video. 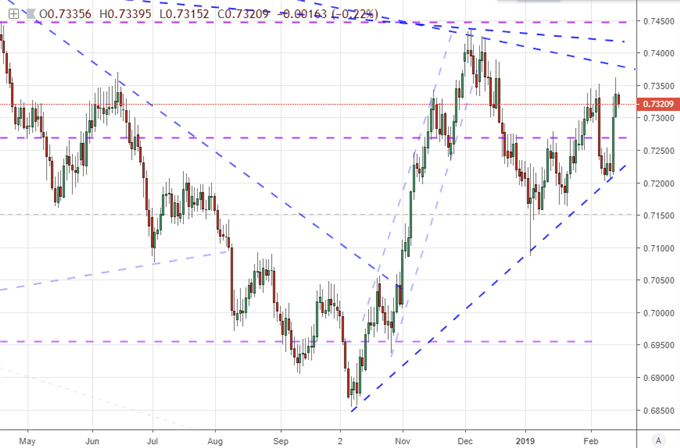