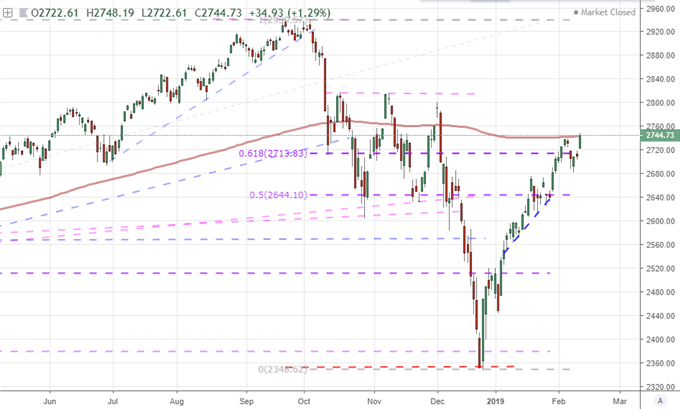 If These are 'THE' Breakthroughs, Should Markets Take Off?

There seemed to be key breakthroughs for two of the most oppressive fundamental themes of the past few months Tuesday - at least the perception of their possible outcomes. Yet, despite the break in the clouds and the prevailing climb in risk-leaning benchmarks like the S&P 500, the occasion merited relatively limited enthusiasm for broader financial system. What was the progress that should have roused the bulls to life this past session? The leading threat to develop over the past year has been the rise of trade wars. While this economic blight is open on numerous global fronts, the primary engagement is between the United States and China. As of this past week, the rhetoric surrounding the revived negotiations seemed to carry caution and skepticism. Through the end of the week, it was suggested that the Trump administration was skeptical that they would strike a deal in time. That paired with reports that the President was looking to hold to the March 1st deadline with tariff escalation the following day (from 10 to 25 percent), concern was spreading fast. Perhaps recognizing the fading speculative conviction, the President softened his tone from the aggressive negotiation position, saying he may extend the tariff escalation date if he believed they were closing in on a viable deal. The more acute disruptor with a course correction his past session were the headlines indicating a deal on US government funding was agreed to 'in principle.' Curbing these risks is a significant lightening of the fundamental outlook. However, both situations seems to be dependent on the whims of Donald Trump who has changed tack frequently with no warning. My greater concern is: what if these risks genuinely recede and markets slide anyways?

Looking to the last of the remarkable runs across the financial system's major markets, the Dollar's advance finally came to a close with a sizable drop Tuesday. This was the first drop in nine trading days - bring to a close the longest bullish stretch for the benchmark currency dating back to November 2016. Technically-speaking, as impressive as the Greenback's chart was, it did little to alter the general structure solidifying the multi-month range. Starting from the bottom of the well-established congestion pattern, the advance terminated well short of the upper threshold at 97.75. In effect, this was an impressively consistent range swing with no further intent to speak of. That fits the general state of the markets (range trading) as well as the fundamental backdrop to the currency itself. We have seen a dramatic decline in rate forecasts these past months, fading growth forecasts and an unmistakable softening of sentiment surveys. In fact, Monday's CNBC small business and the New York Fed's consumer confidence reports reiterated the pessimism that was starting to peak through. To ensure we didn't miss the pain, the NFIB small business reading reiterated the problems. Beyond the drop in the headline figure, the back-to-back December/January plunge in the figure asking whether it was "a good time to expand" suffered its biggest plunge in the survey's history. Quality of labor was mentioned as the biggest concern and intention to increase compensation raised fears that we the seeds of recession are unmistakable. To add a different facet to the Dollar's troubles, the Fed's quarterly household debt update signaled the weakest showing in credit inquires in the data's history (sign of weak growth) and the Treasury reported national debt hit a new record $22 trillion (reminding us of the underappreciated credit quality question for the US). Ahead, we have the US CPI update, Fed speak and the monthly budget update. None of these will single-handedly trigger the market; but if they add to the building bearish wave, expect pressure. 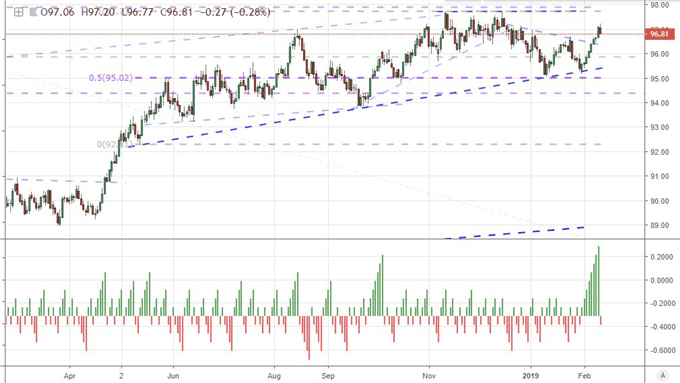 Another currency testing its focus on fundamental matters was the British Pound. Prime Minister Theresa May was in Parliament this past session calling on MPs to remain steadfast with the negotiations. The assessment of her most recent trip to Brussels with the mandate of previous amendments seems to have been a meet that yielded no material changes in the requirements of the parties. Parliament is due to debate Brexit again on Thursday but the key date is February 26th whereby should the separation not be seen as on-pace, the Houses will consider amendments the following day. With so much uncertainty and signs of economic tension already apparent, it will be difficult for other themes to draw the market's attention. The Bank of England Governor's remarks this past session were only registered for his familiar warning on the Brexit situation. The upcoming inflation data run (including CPI) will similarly be overlooked as there is little confidence in a change in rates - and such a move (hawkish or dovish) would render very little impact. Also at direct risk from Brexit (see our Brexit timeline) is the Euro's health. That fact still seems to be conveniently overlooked for the time being, but traders would do well to remember the connection. In the meantime, local fundamental issues are starting to draw the shared currency's attention. This past session rumors started to circulate that the Spanish Prime Minster's budget was set to fail and an election would be prompted. The vote is up today. On Thursday, we will change the focus to more traditional measures of Euro-health: the Eurozone and German GDP figures will offer a picture of the region's economy and in particular its typical engine. If either reading looks on pace to stall, the convenient downplaying of Italy's technical recession will be seen as a mere delay. 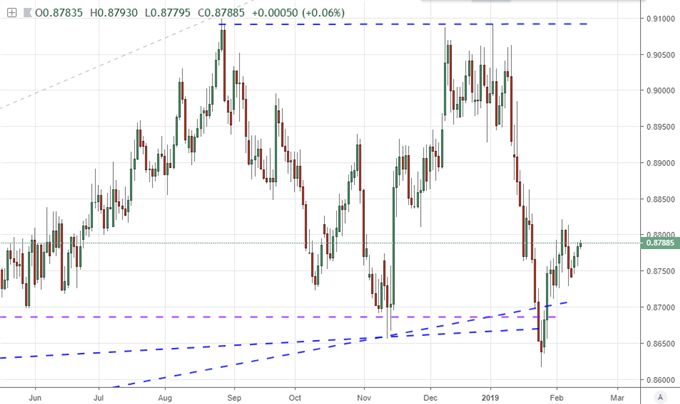 While much of the focus this past session was on trade wars and the progress towards US government funding that extends beyond Friday, there were a few other highlights that traders should keep tabs on. One such theme was monetary policy. With the dovish shift from the Fed and many others these past weeks already painting the picture, there were more obscure updates across the major central banks. Fed officials speaking on the day took the same statement of restraint we read in the December SEP. BOE Governor Carney offered little intention to act aggressively on monetary policy with the Brexit uncertainty in the air. More noteworthy than the market's interests seems to suggest was the suggestion from ECB officials that the market should not put too much emphasis on individual indicators - perhaps recognizing the troubled economic and financial views that can accompany aggressing easing postures. If you were looking for direct monetary policy, the Reserve Bank of New Zealand (RBNZ) held rates unchanged as largely expected, but the New Zealand Dollar rallied smartly after the news. Why? The rate forecast for this lost carry currency was starting to point towards a future cut, but the statement and Governor Orr made it clear that there was little intention of lowering the rates anytime soon. If you want to see what kind of lasting impact this may have, I would suggest steering clear of the likes of NZDUSD or NZDJPY and look instead to an AUDNZD. While the RBNZ has offered some semblance of a lower bound, the general trend is to greater accommodation as economic activity stalls. Keep in mind alternative does well when most traditional fiat markets are under pressure - and especially when risk aversion is added to the mix: gold. We discuss all of this and more in today's Trading Video. 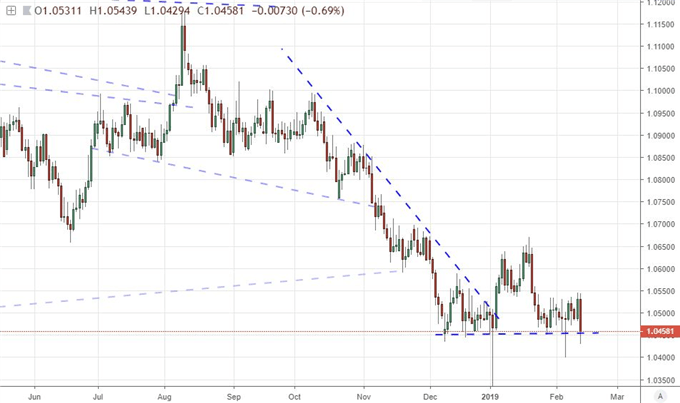