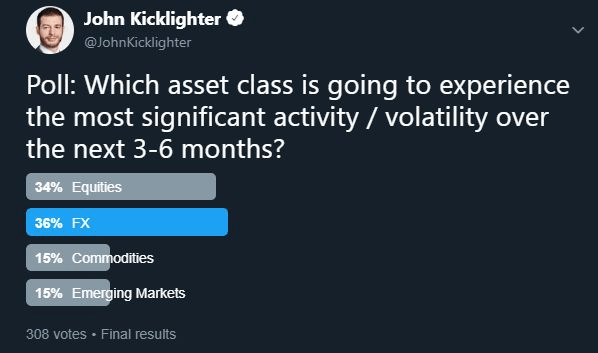 Critical Themes Pick Up Where they Left Off, And Trade Wars Lead the Charge

We opened a new trading week to many of the same systemic themes that have plagued markets with volatility and sudden change in bearing for months. The significant traction gained over the general concern over fading global growth recently is awaiting the next definitive update - the Eurozone GDP this Thursday or perhaps the US growth update for 4Q due the week after. We are working towards a critical date for US government funding with the stopgap funding running out on Friday and recent headlines warning talks had broken. The principal concern on my radar however remains trade wars. The focal point of the threat (it does not pose any benefit for the global markets, only a risk intensified or alleviated) remains the strained relationship between the United States and China. Reports through the end of the past week indicated that White House was not optimistic that a deal would be struck by the March 1st deadline, and the Trump administration was not interested in an extension with intention to raise the tariff on $200 billion in Chinese imports from 10 to 25 percent. That pressure casts a long shadow over the negotiations that pick back up in China with the Treasury and Commerce Secretaries on hand to continue discussions. The unrelenting approach is no doubt a negotiating tactic, but the question remains whether either side will swerve in this international game of chicken' and/or whether an accident will befall the global markets in the meantime. Generally speaking, if the markets are under pressure for any reason in the near-term; this concern will readily add fundamental justification to the growing concern.

A Dollar Run That is Impressive on Paper

The benchmark US Dollar posted yet another impressive rally to open the week. That is impressive owing to both the fundamental backdrop as well as the statistical depth of the move. With Monday's advance, the DXY Dollar Index earned an eighth consecutive daily climb. That is the longest series of gains for this measure of the USD since November 2016. Before we foster any beliefs of an unshakeable bullish trend however, it is worth pointing out that this climb fits comfortably within a multi-month range - and it hasn't even returned to the upper bound of that pattern. There is similar fundamental qualification to this charge. While it is certainly possible to find a market environment where bullish news earns greater traction from the market than bearish, establishing a robust trend to new highs against a backdrop of multi-faceted and deepening troubles is a low probability scenario. On the fundamental side of the equation, there is a host of issues that could drive the Greenback to a sudden trend. Progress towards a funding agreement for the federal government over the weekend came to a crashing halt when talks broke down over quotas on immigrant detentions. There is still time to resolve this threat, but not much. Through a more 'mundane' channel of fundamental development, there were notable sentiment reports to account for Monday. On the consumer side, the New York Federal Reserve released its Consumer Expectations survey results for January. The outcome was a notable fade in confidence with a drop in expected earnings over the next year (2.4 from 2.5 percent), a rise in those expecting to lose their job (14.5 from 13.8 percent), drop in average household spending increase plans (3.0 from 3.5 percent the lowest percentage of respondents expecting an improvement in financial conditions (38.6 percent) since November 2016. Reflecting on small businesses, CNBC updated a 4Q survey that showed 53 percent of the more than 2,200 small business owners polled anticipated a recession in the next 12 months. This will pre-empt Tuesday's NFIB survey. 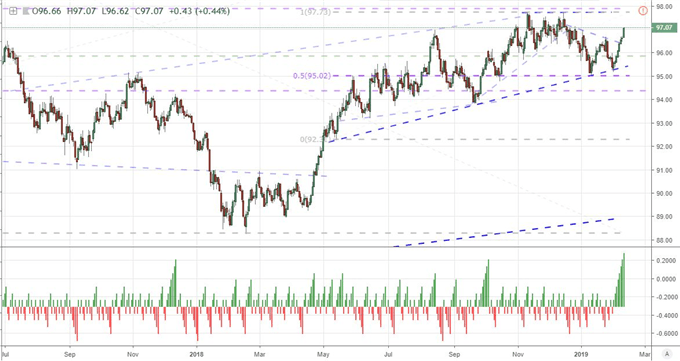 For sheer fundamental volume, no currency would be able to match the Pound's docket to start this week. On the data side, the top concern was with the comprehensive update on GDP. For the month of December, Europe's second largest economy contracted 0.4 percent - the worst showing since before the Brexit vote. For the quarter, the United Kingdom grow a sparse 0.2 percent which set the annual rate at 1.3 percent - the slowest pace since in six years. The other monthly data offered nothing to soften the blow. The trade deficit grew to 12.1 billion pounds (from 11.95), industrial production contracted 0.5 percent and construction output tumbled 2.8 percent. This is a broad wave of disappointment for which it is difficult to miss the impact of Brexit expectations. Brexit is the root of this fear and the development of any true trends - or the restraint from one - will depend on tangible developments on this front. Ahead, we are due an update from Bank of England Governor Mark Carney who will likely take the occasion to reiterate his warning over the risks inherent to a no-deal Brexit. More importantly, Prime Minister May is reported to have moved up her time frame to report to Parliament. Given the rebuff she found from European Union officials, the update will not be a positive one. For now, the Sterling's traversing its broad range for the past months is a reasonable course. With each Brexit update, we simply add the possibility of volatility behind these limit-controlled moves. 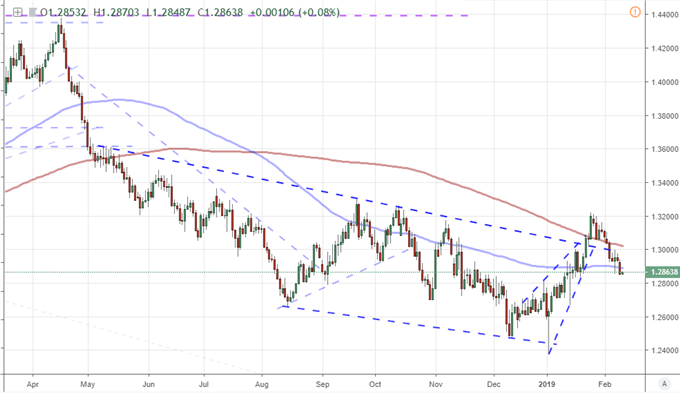 Where trade wars, US government shutdown and Brexit may cover the vast majority of the market's concerns for the immediate future, there are other fundamental issues that can trigger localized market response. On the Euro's side, there are systemic concerns of merit but a market that seems endlessly willing to overlook the overt threats. Italy's pressureon the Euro-area was reiterated this past session between headlines that the country's government was threatening to oust the country's central bank leadership for not stemming the closure of a few key commercial banks (owing to issues directly related to fiscal issues) and the response of Deputy Prime Minister Salvini that using gold reserves could be a possible solution to partially fill the country's budget deficit. Despite the Italian news - and implications for Europe - the Euro itself found little traction on the update. In contrast, USDMXN registered an important bullish break on a month-long congestion pattern into a larger technical pattern on far more restrained fodder. The break above 19.20 should be watched closely whether you follow emerging market currencies or note - as this is a good measure of risk trends and a good indirect reading for the Greenback. Ahead, those looking for volatility should keep a close eye on the New Zealand Dollar. The Reserve Bank of New Zealand (RBNZ) is due to update on monetary policy. A hold is very likely, but it is very likely to keep to its vocal stance on forward guidance. If the Australian Dollar's response to the RBA last week is any indication, the Kiwi Dollar can certainly face volatility. We discuss this and more in today's Trading Video. 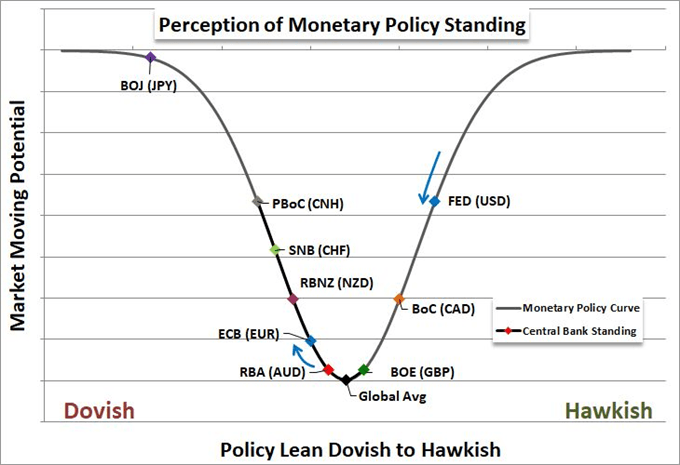