What are the Chances of a S&P 500 Reversal, EURUSD Breakout, Gold Trend Next Week?

I have maintained that the most prominent, market-wide risk the global markets presently face is rise of trade wars. The scope for their expansion and officials' willingness to pursue the damaging path marks an unparalleled threat to global growth and investment. This past week, it was reported that the Trump administration doesn't expect a deal to be struck with China on trade by March 1st. That is the deadline to the 90-day freeze the countries agreed to in order to delay escalation on tariffs for $200 billion in Chinese goods from the current 10 percent to a far more severe 25 percent tax. Given this course, it would be reasonable to expect a further delay if progress was being made so as to lift the cloud from over the negotiations. However, 'senior officials' in the White House suggested Friday that they did not intend to extend the deadline, making the next few weeks critical for discussions but more likely destined to trigger market anxiety. With Chinese markets reopening after the week-long Lunar New Year holiday, USDCNH and USDHKD are important measures to monitor tensions between the two largest economies. However, is increasingly important to recognize that trade threats are far more expansive than just the troubles between these two economic powerhouses. It was reported that the President was considering cancelling a zero tariff policy with India and the USMCA (NAFTA replacement) has come under pressure from Congress. The greatest threat of escalation and global disruption however revolves around the threat of the US applying tariffs on auto imports. The Commerce Department is due to deliver its recommendations after evaluating imports of automobiles on Sunday February 17th.

Dollar Has More at Stake with Shutdown, Monetary Policy Concerns

With all of the converging systemic themes there is one currency that is far more connected than the others: the US Dollar. It is clear where the vast majority of the trade war escalation is originating, and the consideration of blowback is starting to filter into the market's conscious. There is less ambiguity as to who stands to suffer should the US federal government return to its partial shutdown. The stopgap funding will run out as of this coming Friday and the President has threatened to freeze the government once again or use emergency powers if funding is not made available for the border wall. Optimism of a deal has waned as this past week has worn on. Now enthusiasm seems to peak at a possible extension to push back the February 15th make-or-break date. Monetary policy is another issue with systemic reach. The Fed has already signaled its dovish shift the week before last and one of its most dovish members, Bullard, said the current settings are already restrictive on Friday. The week ahead hosts the market's favorite inflation indicator (CPI) but that reading is likely to sway sentiment little unless it collapses and gives clear leeway to the central bank to completely halt normalization plans through the rest of the year. Considering everything is FX is relative, the Dollar's greatest potential in monetary policy is through the potential pain of its counterparts. The ECB and BOE have cued clear reticence for monetary policy moving forward, the RBA has fueled speculation that a cut will come before a hike, and the Bank of Japan has made no effort to move from extreme accommodation. That is not a very high bar to overtake. 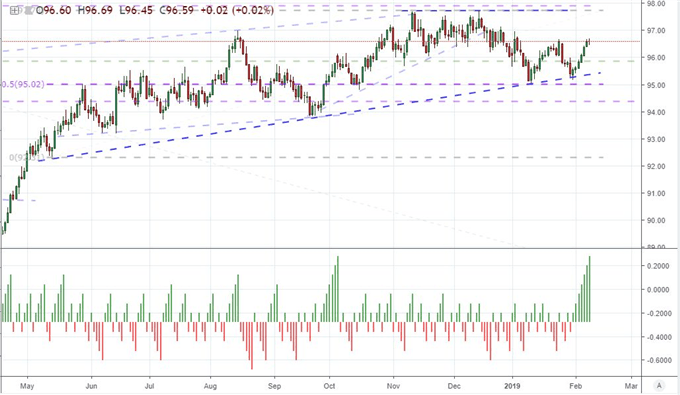 Looking beyond the world's most liquid currency, there is noteworthy event risk ahead for top counterparts. For the Euro, scheduled event risk is distributed throughout the week. That said, Thursday represents the pinnacle of market moving potential. On tap, we have the Eurozone and German 4Q GDP readings. We have already seen an official recession signal from the Euro-area's third largest economy, Italy. While the region's largest economy, Germany, is not likely to have slipped into contraction, fear that its economy has stalled has taken on nearly viral-like concern following the severe drop in indicators like industrial production. Outside of growth readings, the Euro is still sporting serious premium around anticipation for the ECB to hike rates in the foreseeable future. A move before the end of the year has dropped sharply and yet the Euro has not fully relented its overzealous run through 2017. As for the Pound, the data will start early with the 4Q GDP data due on Monday. This - along with trade, industrial production and other meaningful data - will represent an important economic update, but it will struggle to ultimately take the Sterling's reins with Brexit unresolved and on its crash course with the March 29th Article 50 date. There are growing expectations for a 'no deal' outcome, but does the market accurately reflect that outcome? It's unlikely.

There are systemic themes a-plenty in the markets, but there is also discrete event risk that data traders can exploit if they prefer targeted volatility. One event with limited global reach but that can trigger a significant domestic move is the Reserve Bank of New Zealand (RBNZ) rate decision. The monetary policy group is very unlikely to change its settings at this meeting, but the chances of a forecast shift are high following the same from the Reserve Bank of Australia (RBA). The RBA didn't alter its own policy but speculation of a cut before it ever considers tightening set in with a clear deflationary impact on the Australian Dollar. Traders will do well to watch out for similar for the New Zealand Dollar - especially if risk aversion picks up. Another key event risk worthy of our attention is the Japanese 4Q GDP. This is an important indicator for one of the world's largest economies - and thereby a critical reading for global activity. That said, very little market movement from the Yen has originated with Japanese data. I will be reading this growth figure as a sign of Asian economic health as a wider assessment of global potential rather than a cue for any USDJPY movement. That same global perspective is appropriate for the world's most famous commodity. Crude oil has seen some noteworthy, daily movement this past week; but it has notoriously avoided any semblance of consistency. We are forming a 'right shoulder' on an inverse head-and-shoulders pattern, but this does not look like the environment for a true breakout. It could be argued that oil is also forming a shorter-term, upright head-and-shoulders pattern just over the past month. If broken with a bearish move, that would be a path of least resistance in a much more reasonable range. We evaluate the volatile but overwhelmed conditions of the market ahead in this weekend Trading Video.