What to Expect from EURUSD Run, GBPUSD Stall and S&P 500 Correction Friday

Risk appetite has seen its momentum wax and wane over the past six weeks, but its general bullish course held firm through the period. Thursday, there was an unmistakable drop in the key sentiment measures across regions and across assets. The US equity indices have took up the charge in speculative appetite through January so the S&P 500's slide this past session left a market on investors' conviction. After rallying more than 16 percent from its December 24 low to this week's high, we saw the index gap lower on the open and slide further during active trade. The decline was the biggest in two weeks though it eased back from its intraday low before the close. What really counts in measuring market-wide sentiment however is the universality of the current. On that front, we registered a very similar pattern from global shares, emerging markets, junk bonds, carry and more. What was the major theme on the day of this tide change? Trade wars. Reports that US President Trump and Chinese President Xi would not meet before the deadline of the 90-day negotiation period ended which suggests we may be on track for the broad increase in US tariffs on $200 billion in Chinese products from 10 to 25 percent. It is important to remember this is not just a one-dimensional issue as well. The presumably resolved NAFTA renegotiations (now the USMCA) are starting to make headlines again as Congress threatens to undermine the effort. The Legislative branch is going even further, with a bipartisan effort to curb the President's trade fighting powers under the controversial Section 232 of the 1962 Trade Act. Another threat in this same vein not far into the future is the expected guidance from the Commerce Department on auto imports requested by the President due February 17.

Chart of S&P 500 and Poll for Traders’ Forecasts 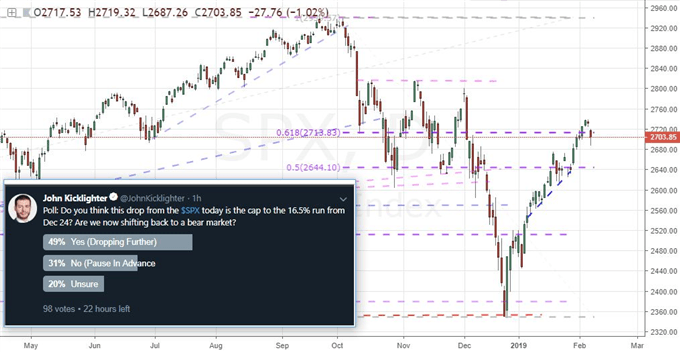 Monetary Policy Is Taking a Notable Turn for the Dovish

Trade wars may be the dominant theme for the day, but it isn't the only stiff wind blowing across the markets. Chatter over the progress of government funding to replace the temporary stop gap that expires next Friday is riddled with a steady enthusiasm that a deal is right around the corner. The optimistic forecast for a Friday deal has been pushed back to Monday. More active and global in nature is monetary policy. While the Bank of England's (BOE's) policy decision Thursday was a top event in its own right, its place in the spectrum is materially shifting to the dovish extreme. In addition to the UK's hefty downgrade in forecast, the Fed speak this past session weighed in on possible troubles. In a townhall, Chairman Powell said he was concerned about loss of public trust in the central bank. That is a serious global threat as these frequent last-resort crisis fighters depend on their ability to maintain confidence in financial system functioning. The Bank of Japan and Swiss National Bank have already gone over the credibility ledge and have suffered for the loss of status. Emerging markets are perhaps the most complicated measure of monetary policy's influence on markets. A curb on Fed hikes is a benefit to emerging market borrowers, but the threat of a slowdown in the global economy and financial expansion is ominous for these high-geared speculative centers. Mexico's central bank held its benchmark rate unchanged but lowered its forecasts. USDMXN was notably unchanged in a technically-leveraged range. In contrast, the Reserve Bank of India cut its benchmark rate 25 basis points (to 6.25 percent) for the first time in six months on a more troubled forecast. This decision would come with the additional strain of questions over independence given it surprised most economists and comes close to the election. 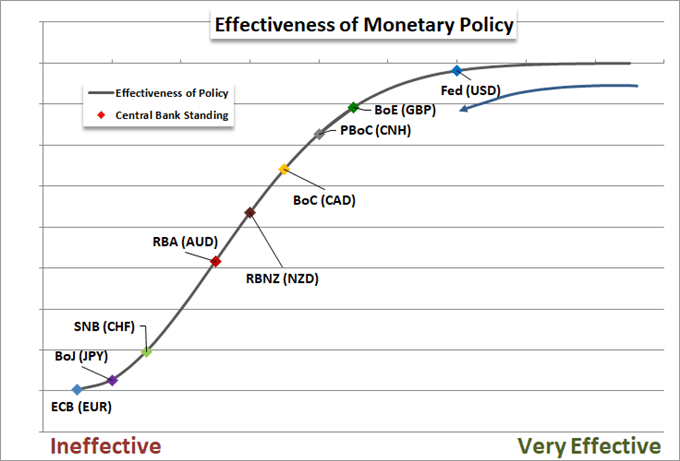 There was little doubt that the top event risk over the past 24 hours was the Bank of England's monetary policy decision. It came as no surprise that the group would leave the benchmark rate (and its bond holdings) unchanged. There is not much room to cut preemptively to head off growing concerns and certainly not enough inflation pressure to warrant an over-riding rate hike. That fact alone would have drawn little interest if not for the Quarterly Inflation report that accompanied the policy decision. The outlook for inflation was lowered with the CPI reading seen slipping below the 2 percent target owing to lower oil prices and then stabilize thereafter moderately above that same mark. Far more disconcerting was the downgrade to the growth forecast for 2019 which was set at 1.7 percent last year and now resides at 1.2 percent - what would be the slowest pace of expansion in a decade. Of course, you can't analyze growth without evaluating the impact of Brexit. On that front, the 'fog' as Governor Carney called it was a serious risk with the economy not prepared for a no-deal, no tradition outcome. Speaking of the UK's divorce from the EU, Prime Minister May found little progress in her discussions with the EU's Juncker and Tusk who rejected any discussion of changing the deal or backstop. Perhaps a silver lining was opposition leader Jeremy Corbyn issuing terms for Labour to support May on Brexit with five binding commitments. They would not be accepted in their present form, but it is perhaps progress. In an impressive feat, the Pound was steady and even advanced on the day to officially end the steady six-day tumble this past week. I wouldn't be too confident of how far this advance can run however. 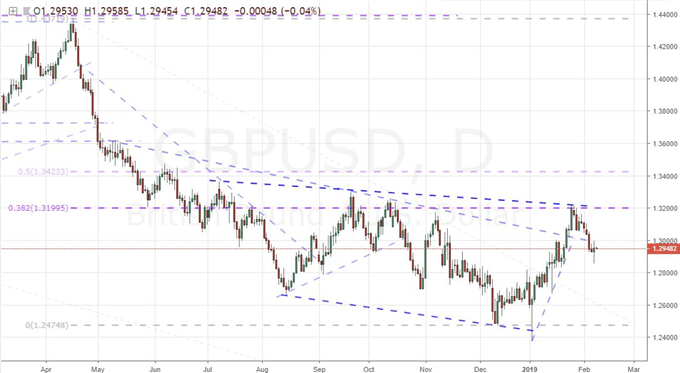 Placing the Dollar and Oil in Their Appropriate 'Counterpart' Role

What is driving the Dollar? The DXY Dollar Index has climbed six straight days through Thursday. That is still only the longest stretch for the world's most liquid currency back to early October and brings us to the middle of a multi-month range, but it is nevertheless a bullish charge of some substance. Considering forecasts for US monetary policy have deflated recently, Powell's remarks did little to bolster the bulls' conviction. The economic data on the day was similarly lacking for authority in support. So, where is the Greenback drawing its strength? The weakness of its counterparts. As the Euro and Pound slide fortheir own issues, we find demand follows liquidity. The Euro was deflated by the European Commission's sizable downgrade in 2019 GDP forecasts (1.9 to 1.3 percent), the ECB's warning of bearish risks and the reference to Italy's growing troubles (including the spat with France over Italy's Deputy PM meeting with the Yellow Vest protestors officially in France). Crude oil follows the same direction-as-utility function. While many still place considerable weight behind OPEC's production reports and remarks, the real weight comes via risk trends. We could see this as 'demand' side influence or just general interest for risk-leaning assets; but either way, the S&P 500 is one of the best cues for crude. We discuss all of this and more in today's Trading Video. 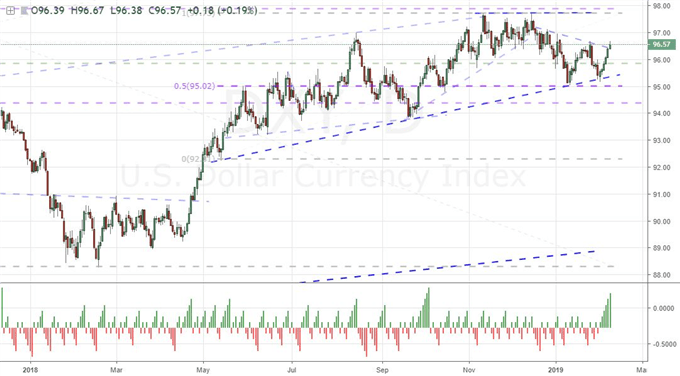