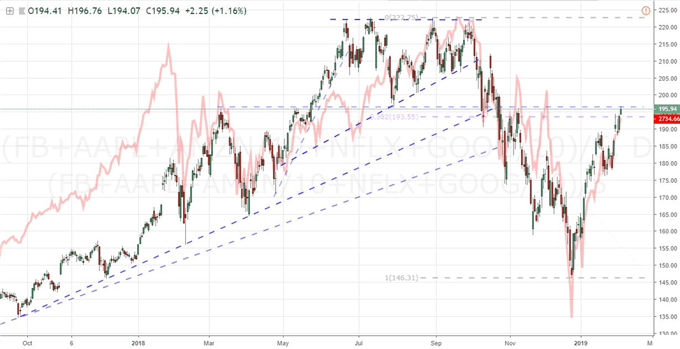 A Reminder of What's at Stake in Trade Wars

It is always good practice to evaluate the prevailing winds of the market by keeping on top of the most systemically-influential themes afflicting the global financial system. That leader has changed a number of times these past few months - and even weeks. The influence from the US earnings season has already crested its peak with Google rounding out the FAANG procession after hours Monday. Neither GOOG shares nor the FAANG enjoyed a particularly notable outperformance relative to the broader equity indices over these past weeks, reflecting as much on conviction behind risk trends as much as the quality of the data. Political-economic permeability was exacerbated during the (now-paused) partial US government shutdown, which will likely lead to closer scrutiny over the State of the Union delivered by President Trump, even though we are likely to see any meaningful policy announcements. A reminder of the most existential threat to global economy - trade wars - the United Nation's Conference on Trade and Development (UNCTAD) issued a severe warning through a report and its head of international trade Pamela Coke-Hamilton. The group warned that if the US and China move forward with escalations to their ongoing trade wars, it could sharply stifle economic activity - with an estimated $160 billion loss to ease Asian producers' exports. The US and China would only wrest a fraction of the export clout away from those goods they are taxing against the other while a few countries (like Japan, Mexico and Canada) could see a pickup in shipments abroad. What good that may afford those specific players would seemingly be more than offset by threats of currency wars, stagflation, unemployment and a high risk of contagion. Heed the many, many warnings.

Volatility Shows How Quickly Sentiment and Pace Can Change

Despite the buzz of systemic warnings in the background, the benchmarks for risk appetite continue to edge higher. The FAANG has not amplified the Nasdaq 100's performance to lap its broader or blue chip counterparts (S&P 500 and Dow), but there is still a broad interest in taking on exposure for higher yield. The US tech sector has not always been the leader of the broader financial system, but that has been the case over the past years. While the restraint of late may be a sign that focus is shifting, it is more likely an indication of investors not committing to the full complacency that guided their investment decisions in previous years. Another sign that markets could change quickly and with little warning is the state of volatility. The VIX volatility index may continue to drift to lows last seen in October and the volatility of volatility index (VVIX) hit its lowest level since July 2017, we are reminded of the misleading signals from these 'fear' measures from price action just over the past year. The VIX was dropping regularly below the 10 mark in the second half of 2017 which set the stage for the implosion in February last year. Our resting rate of volatility is significantly higher than that extreme level, the laundry list of fundamental risks remains worryingly long and price action itself on benchmarks like the S&P 500 shows frequent sharp turns. So, while US indices, emerging markets, carry trade and Treasury yields may be inching higher; recall the lessons from 12 months ago. 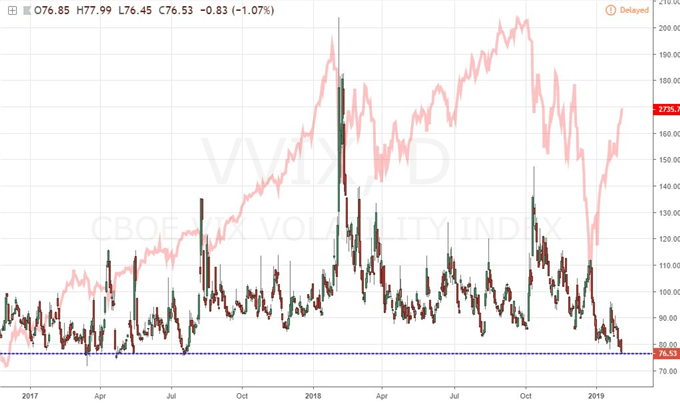 EURUSD continues to trade in a remarkably restricted range, and that is consequence of both benchmark currencies spinning their tires. The DXY Dollar Index managed to advance a fourth consecutive session through Tuesday - the longest bullish stretch since October 4th. That is more a statement on the lack of meaningful swings from this currency of late than it is a significant sign of strength for the currency. The docket offered little support in an ISM service sector report that cooled modestly to 56.7 against 57.0 expected. More notable in this report was the frequency with which the government shutdown was mentioned in different sectors. 'Fed speak' was another theme with Mester sticking to a hawkish version of the recent neutral shift from the central bank (saying further hikes could be warranted but there was no rush). Ahead, we have the delayed November trade report finally on tap as well as the Fed's Quarles speaking on the bank stress tests and Fed Chairman Powell hosting a townhall with teachers. Just as disconnected from its own fundamentals, the Euro had more binary data to consider this past session - even though the currency wouldn't commit to a direction. Italy's PMI activity updates for January were as disconcerting as expected (composite at 48.8 from 50 previously) with the 4Q recession confirmation and reports of strain in the government growing. Another theme to keep close tabs on are reports that the ECB is hesitating from adjusting its forward guidance amid the swooning economic and financial backdrop because officials are concerned about the difficulty a change now could create for the new President come Draghi's retirement in late October. 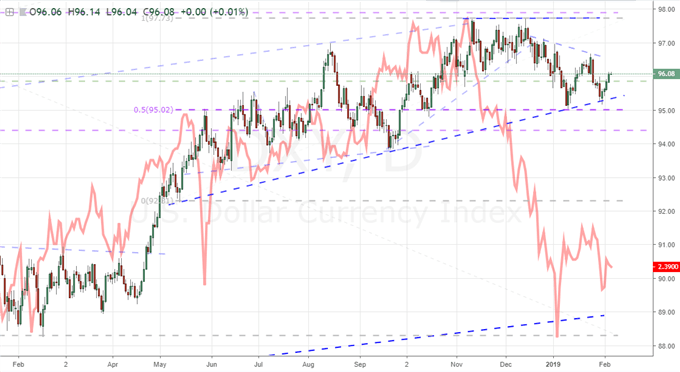 It was remarkable that the British Pound steadily gained ground heading into the last two critical Parliamentary votes on Prime Minister Theresa May's Brexit proposals. The chances that she would find backing from MPs after months of criticism was remarkably low, but the market climbed nonetheless. With the strong rejection of her plan and the push for amendments to define demands in EU negotiations booked, we have seen heard second hand accounts of the pressure that has returned to the Prime Minister's shoulders. In Belfast Tuesday, May addressed the focus on the backstop saying she would seek changes to the existing approach rather than scrap it altogether. The trouble she will face from the Brexit supporters and the EU officials was palpable among speculative interests and helped lead to a seventh consecutive drop for an equally-weighted index of the Sterling - the longest slide in five years. This pressure will likely continue with May due to meet with the EU's Juncker and Tusk on Thursday. In contrast, the Australian Dollar continues its struggle to find traction despite an overwhelming amount of fundamental charge. Following the painful building permits and inflation statistics to start the week, the RBA rate decision bolstered speculation of a rate cut before a hike, retail sales contracted 0.4 percent in December and the services PMI for January collapsed to a 44.3 reading (well into contractionary territory). With RBA Governor Lowe's remarks already weighing the currency, 4Q business sentiment and last month's construction activity report are next on tap. We discuss all of this and more in today's Trading Video. 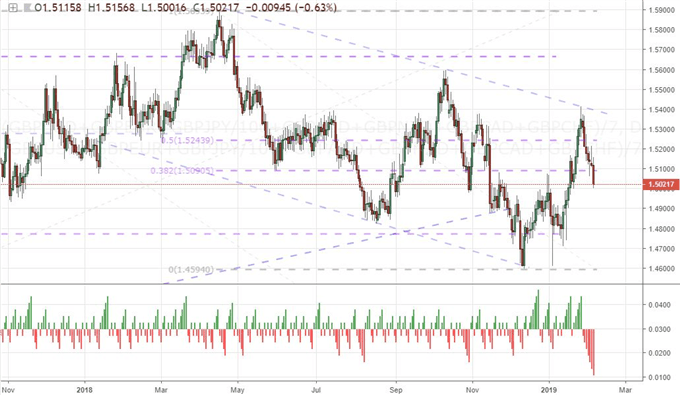