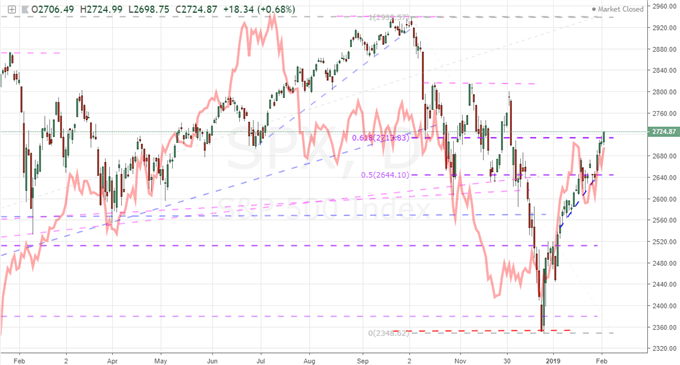 Will the Nasdaq and S&P 500 Finally Find FAANG Earnings Leverage on Google's Beat?

This past week looked like a return to convenient and complacent norms. The steady climb in benchmarks like US equities, emerging market assets and carry trade harkened back to periods over the past decade where little valuation was necessary and trade selection seemed to follow the 'dart board' theory. Though benchmarks like the S&P 500 continue to advance, without a reliable fundamental grounding, pacing and ultimate trend intent will always maintain an air of anxiety for the global markets. The top fundamental themes of past months are still simmering in the backdrop, but they are clearly lacking for drive. Trade wars hasn't offered a direct update since last week's general remarks from US trade negotiators voicing lose confidence of progress. Political risks to economic and financial health remain a familiar topic for the headlines, but these updates don't seem to stretch much beyond local market interest - when they can even stir their domestic pools. Even monetary policy, charged to life last week with the Fed's dovish penance last week, hasn't rendered the kind of sentiment and currency disparity that we normally expect from an active response. With these high level themes unable to give traction, should we expect different from earnings? In the past, we have seen better than expected figures from major players charge indices and even spread out to global risk trends. We have seen very little of that this quarter. After Monday's close, we received the final of the FAANG members' updates. Google beat headline earnings per share (EPS) forecasts at $12.77 per share versus $10.86 consensus. Anticipation has been lowered over time and forecasts were lowered, but that hasn't dimmed speculative response in the past. It likely will now. After-hours trade in GOOG headed notably lower.

The Fed's Dovish Shift Doesn't Add New Dollar Weight, Will US Data Do the Job?

Last week, the Fed made official what the market had already assessed after the market's tumble through the final quarter of 2018: that it is unlikely to hike rates this year. Since the monetary policy statement and Powell's rhetoric in the press conference, we have seen the restrained rebound in implied interest rate forecasts for the Fed fizzle out. Monetary policy is still a point of speculation for Greenback with one of the group's most hawkish members due to speak on monetary policy and the economic forecasts ahead. Yet, I won't hold my breath that her views will be interpreted as an official shift in group policy. I suspect the same is true of Chairman Powell's townhall on Wednesday evening. Wavering sentiment surrounding political risk is another point for which traders should observe scheduled event risk. Tomorrow at 8 PM local time, US President Donald Trump is due to deliver the State of the Union address after the delay following the US government shutdown. It is more likely to follow a script and thereby not stray into market-moving, policy-surprise territory. Nevertheless, we've seen enough unexpected updates from the President to know not to write off the possibility. More reliable over the next 24 hours will be the data on tap. The ISM's service sector activity report for January is due, and the notable slowing in its complement the manufacturing report hangs in the air. Considering the service sector accounts for nearly three-quarter of output and jobs in the United States, it is an indicator not to be taken lightly. While unlikely to trigger its own trend, don't underestimate the collective influence of this data to eventually command the drive for preference and general sentiment in the financial system. 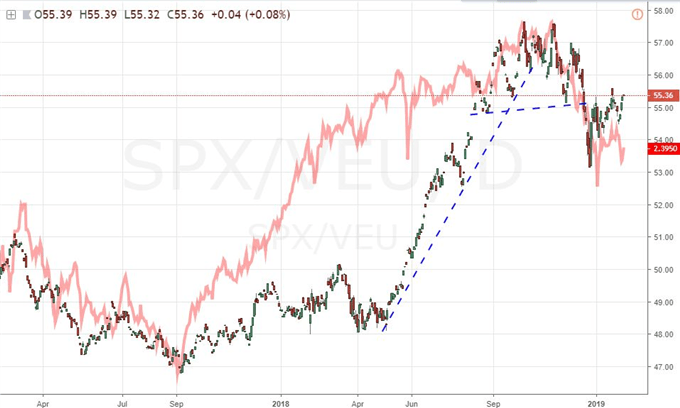 Neither the Pound Nor the Euro Can Escape the Brexit Concerns

The Brexit is a disruptor for the markets - whether it is sending of jolt through the markets out of the blue or anchoring it despite the presence of other, important fundamental updates. If you are following the Pound with rising excitement for the event risk this week, beware that the data and important monetary policy event are unlikely to earn a significant move from the currency, much less a lasting trend. The UK's murky path to its divorce from the European Union continues to weigh on local and international investors alike. Over the weekend, Prime Minister May penned a letter for the Sunday Telegraph that said she was going to Brussels with a "fresh mandate" following the Parliament's amendment votes. The rhetoric has been fairly universal that EU officials are not looking to budge on the previously agreed-to proposal, but German Chancellor Merkel has opened the door for hold-out speculation in suggesting there may be room for 'creative' compromise. Meanwhile, sentiment and economic measures continue to show the strain of anticipation. The construction activity report from Markit this past session showed a significant drop and miss for the January figure (52.8 to 50.6) which does not set us up in a favorable position for the data later this week. Meanwhile, traders would do well to remember that the Euro and European assets are caught in this vortex as well. The Sentix investor sentiment survey released this past session dropped unexpectedly to a four-year low -3.7 with the survey conductors suggesting Brexit was among the top concerns. If you were looking for local fundamentals to offer more guidance for the shared currency, the technical recession in Italy is meeting headlines suggesting political strain is building between the parties in the coalition government. The League and the Five Star Movement are at odds over an alpine train tunnel and Deputy Premier Salvini's legal case. The threat of an early election still lingers in the background, but 10-year Italian sovereign debt yields still show relatively limited fear. 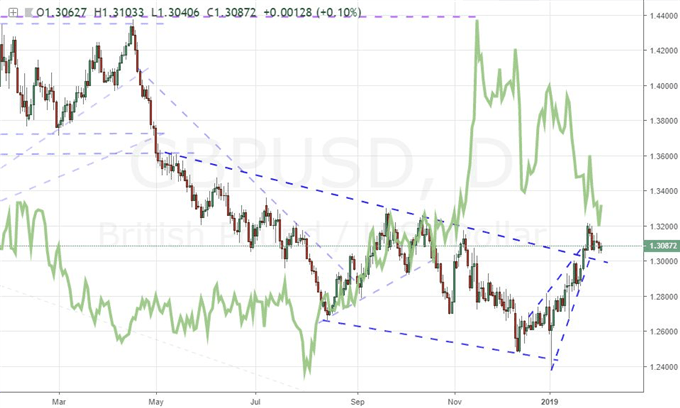 Outside of the majors, we are still marking time until the next commitment to system-wide risk trends. Whether you look to the Dollar, Yen, gold or nearly any other benchmark; there is a distinct 'risk' dependency factored into our lack of trend development. The slow climb in speculative appetite is fostering little opportunity to establish genuine trends. It is against this backdrop that we should evaluate assets with a direct line into systemic issues or that are temporarily occupied by their own fundamental developments. The Australian Dollar for example has absorbed a lot of fundamental radiation and is expected to come across much more. The combination of building permits, inflation and service activity readings were uniformly bad for the currency; and yet the Aussie was virtually unmoved through Tuesday's open. It remains to be seen whether the trade, retail sales and RBA rate decision can prompt any deeper interest from the market. Risk trends are an obvious yoke for emerging markets but keeping pace with the EEM Emerging Market ETF is not appealing to me given the lack of commitment and high bar for technical uptake in the patterns it sees. However, I am open to the possibility that risk trends can stick to autopilot with a slow advance or fall apart. That is why I've established options for either scenario among emerging market currencies: a bullish view of USDMXN for the latter and USDZAR continuation lower for the former. And then there is crude oil. The commodity continues to confound technical and fundamental interests alike. US oil has broken above resistance in an inverse head-and-shoulders neckline pattern this past week at $54.00 but serious follow through has not followed in its wake. Risk appetite is playing a far greater role here than the simple supply-demand issues like the United States announcing sanctions against OPEC member Venezuela. If the equities don't hasten their ascent, my expectations for crude oil will not surge independently. We discuss all of this and more in today's Trading Video. 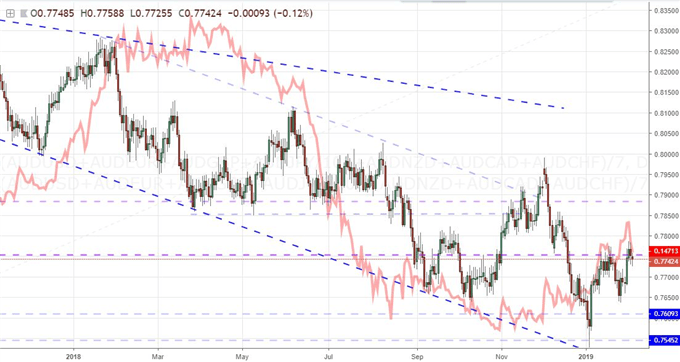