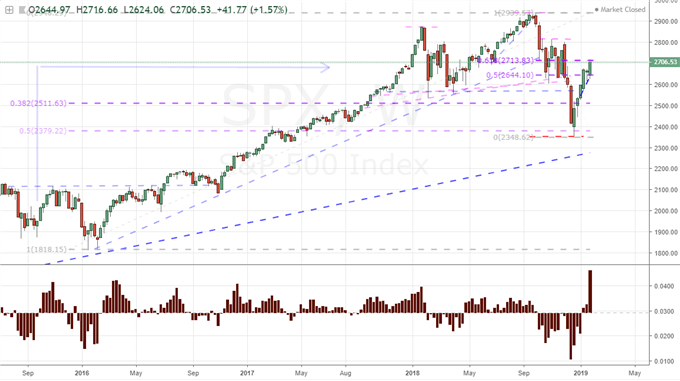 A Fundamental Concentration of Themes Around US Markets

There has been a considerable shift in the fundamental backdrop over the past few weeks, and there is an unmistakable connection in these developments to the US. The end to the partial US government shutdown Friday January 25th started the process whereby general speculation fostering a recovery in risk assets started to find tangible footholds among some of the most prominent fundamental themes to develop over the past year. The political standoff and economic drain came on quickly and ended just as abruptly. This breakthrough has the quality of averting further, extensive pain rather than represent a true opportunity for further growth or investment returns. It is also not a fully resolved threat. The change in tone around the Fed's monetary policy bearing carries far more weight in the sense of a global shift in central banks' support of markets than the ECB, BOC or other groups with an accommodative correction before it. As for the burden of trade wars, there is little doubt that the United States stands at the center of this bid to leverage national growth at the expensive of global expansion. Yet, improvement in this considerable weight remains largely rooted in speculative anticipation. This past week, the discussions between China's Vice Premier and a delegation of high-level US officials (the Trade Representative, Treasury Secretary and Commerce Secretary) didn't yield actual change in trade barriers, but participants voiced encouragement and said negotiations would continue in China. Given the lift of the markets and sense that the fundamental clouds are lifting, it is not surprising that the markets are drawing a more enthusiastic forecast for the theme. Expect these themes to continue to factor into the market's assessment of growth, capital flows and general risk appetite. At the same time, don't be surprised if skepticism creeps back in before a self-sustaining momentum effectively detaches us from fundamentals as was the norm in previous years.

Looking at the general performance of risk-leaning assets over the month of January (since the month came to a close this past Thursday), it is clear that there has been a significant recovery in bullish sentiment. Most assets that follow growth or the reach-for-yield have recovered lost ground through the period - and yes, we should still consider it a recovery effort rather than an independent bull trend. The most remarkable effort comes through US equities - though more for the asset class's popularity than its gains. Earnings this past week helped to add a genuine fundamental boost to the advance. While Apple and Amazon reports were of mixed quality, Facebook was a FAANG member that genuinely beat analysts' expectations. That said, the collective's advance has fallen short of the broad metrics like the S&P 500, and the tech-heavy Nasdaq that led the market through the record-breaking bull trend is still falling behind the pace of the blue-chip Dow. If sheer speculative appetite were under power, an argument could be made for US markets (the pace setters) to charge and outpace global counterparts. Alternatively, it could be said that the discount in global shares relative to the Dow, S&P 500 and Nasdaq could see stronger relative runs to close the value gap. Neither seems to be the case however. There is certainly a speculative charge that exceeds reasonable growth forecasts though. Where the emerging market and high-yield fixed income benchmarks continue to pace higher, the growth and stability-minded commodity and sovereign bond yield markets are showing far less enthusiasm. The animal spirits can keep control through an unexpectedly long run - as previous years have shown - but these are not discounted markets. 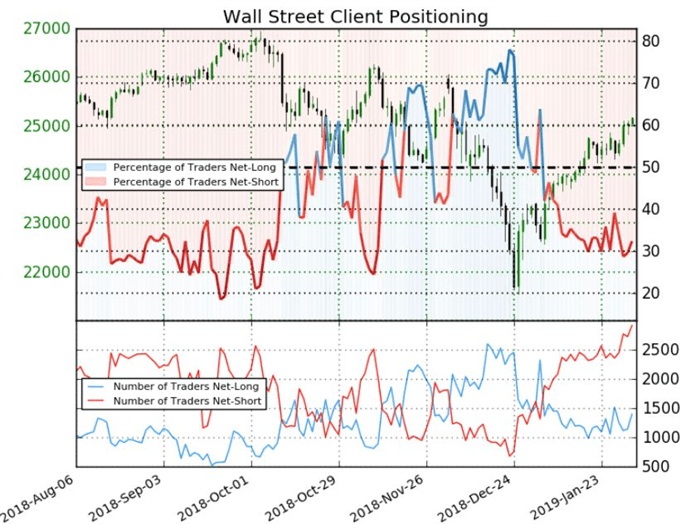 Where there may be fundamental benefit for the US markets owing to the local-nature of the aforementioned 'improvements', but that isn't translating into lift for the benchmark currency. The Dollar managed to avert technical disaster this past week when it held the line at channel support and the 200-day moving average which converged for the DXY Index at 95.25. Then again, a hold at support is not the same as genuine fundamental strength. Of the key themes, the shift in monetary policy is more explicitly a burden for the currency. The rhetoric of the Fed's policy statement and the Chairman's warnings clearly pointed to a more dovish policy group, which led to a drop in implied yield forecasts via Fed Fund futures. If you want to keep tabs on a pair well attuned to the outlook for monetary policy speculation, EURUSD is appealing in that there is still a heavy premium afforded to the Euro for the anticipation of its first hike. Looking ahead, this is perhaps the most capable theme to establish progress thanks to noteworthy Fed speak scheduled for Powell, Clarida, Mester and Quarles. As for trade wars, there is the question over genuine progress and a grander debate over what currencies would benefit the most from its passing. For the USDCNH exchange rate, it is more likely that the Yuan appreciates as conditions improve; which is already starting to occur it would seem. That said, the USDHKD suggests there may be some massaging of performance to earn confidence. As for risk trends, it may seem obvious that the Dollar is the absolute safe haven. The Greenback offers harbor in absolute financial crises, but its high yield has also imbued it with certain carry trade properties. If you want to evaluate the degree of risk-on or risk-off (general direction should not be difficult to discern), refer to the USDJPY. 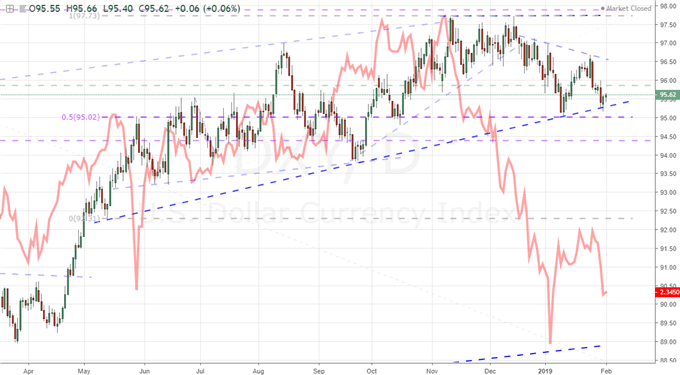 Looking out over the coming week, there is a notable throttling of high-level scheduled event risk (whether data or event based). The government shutdown-delayed US data (like the 4Q GDP) will come out the week after at the earliest, so we will have to make due with what is already on for the US markets. Service sector activity and November trade are noteworthy but not exactly critical fare. In contrast, the Bank of England rate decision is going to be one of the more important central bank meetings of the major countries through the first quarter. They are very unlikely to change policy, but there is worry that the authority will need to control inflation that could be exacerbated by Brexit issues. What makes this event particularly pressing is the release of the quarterly inflation report which will offer forecasts for growth, inflation as well as the Brexit scenarios. This is unlikely to be an 'encouraging' update. Other fundamentally-loaded currencies to consider include the Australian and Canadian Dollars. The former will host the RBA rate decision which is similarly unlikely to alter its course from its record low yield, but any minor change in language can fuel speculation of an eventual return to glory for this lost carry currency. The Canadian Dollar posted a notable climb to end this past week - it seems largely on the basis of oil's measured progress - but follow through should be something we hold higher against higher qualification. The top listing over the coming week is the Canadian employment report but that isn't on tap until Friday. It is also worth keeping tabs on the emerging market set. I'm partial to the USDMXN which has an appealing technical setup with the Mexican central bank due to update its own policy. If risk appetite led this pair to struggle, I think USDZAR (the South African Rand) is a good counterbalance. We discuss all of this and more in today's Trading Video. 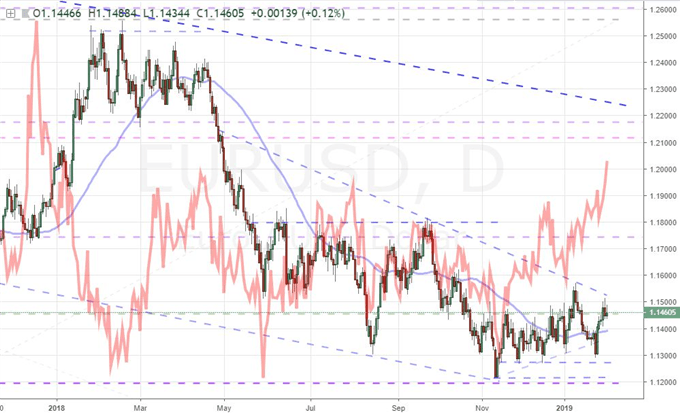