Economic Burdens that Keep on Giving

The partial shutdown of the US federal government may have officially ended this past Friday, but its cumulative effects are still being registered by the economy, financial system and in turn the markets. The US consumer sentiment survey, from the Conference Board, this past session reinforced a laundry list of similar reports from economists, businesses, investors and consumers that all register at least a contribution of concern from the volatile of politics in their concern over the future. Meanwhile, White House economic advisor Larry Kudlow weighed in to suggest that there may be no lasting economic impact from the shutdown, but that looks like cheerleading to anyone that isn't in the administration. To contrast that, Moody's said the shutdown was 'credit negative', Treasury Secretary Mnuchin is repeatedly favoring pairing the debt limit to the spending bill, and the White House has already warned ahead of next week's due date that it would not have the 2020 budget proposal in time. The trade wars, on the other hand, continue to unfold. Starting tomorrow, the China's Vice Premier is due to meet with a delegation of Lighthizer, Mnuchin, Ross and Navarro. This would be encouraging if not for the cloud of the US Department of Justice's 13 count indictment against Chinese tech company Huawei. Then there is also the accumulated weight being measured by growth figures and US corporate earnings. On the heels of the Caterpillar and Nvidia misses - with specific mention of China - Apple slightly beat expectations Tuesday after the close. That was a beat, however, of a notably lower forecasts. Ahead, we have Microsoft and Netflix with Amazon on Thursday.

For the must fundamentally burdened currency this past session. There was little doubt that the British Pound was top candidate. After the debate over Prime Minister Theresa May's proposed Plan B Brexit plan, Parliament put a number of amendments up for vote. Of the six important votes, four were rejected. The Cooper amendment that would seek to postpone Brexit to the end of the year should the PM fail to secure an agreement by February 26th and Reeves amendment which would offer no time frame were rejected. The possibility of giving Parliament control over the Brexit path (Grieve) was shot down as was remaining in the customs union (Corbyn). The movements actually approved were the Spelman which essentially states - in a non-binding agreement - that Parliament did not want a 'no deal' scenario while the Brady called for the Irish backstop to be replaced by an alternative solution that avoids hard borders. Given May's approach to the vote in using this as a means to relay the will of the UK in negotiations with the EU, the outcome isn't 'good' or 'bad'. However, it was reported that the EU was not interested in an emergency summit; and while they were open to discussions of a delay (which Parliament rejected), there was no interest in a withdrawal deal or renegotiating the Irish backstop. And so, we are left with the same general impasse, now just between different parties. It should therefore come as little surprise that the Pound dropped through the series of votes, and further easing is a tangible risk. I'm watching GBPUSD, EURGBP and GBPCAD. 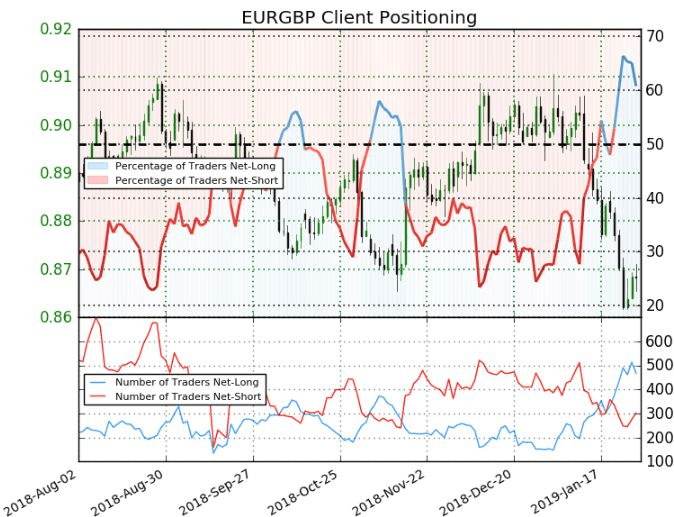 Beware the Dollar's and Euro's Schedule Ahead

For event risk ahead, the focus of the market moves from the Sterling to its more liquid counterparts: the Dollar and Euro. Top listing for the upcoming session goes to the Greenback. Considering the 4Q GDP update will be delayed due to the government shutdown, the focus will be even further concentrated on the Federal Reserve rate decision. Normally, I would consider this non-quarterly eventto be either a practice in nuance or full write-off. The Fed has hiked on the quarterly meetings and typically there is only a policy statement to accompany these updates. However, we have something more this go around with a scheduled press conference half an hour after the decision. There is plenty of room for Chairman Powell to deliver an surprisingly candid view on monetary policy or growth forecast. This may be one of the few discrete events that can compete with more systemic issues. In similar form, the Euro is wading into a deeper pool of fundamental issues. This past session some lower level data and reports that Italian Prime Minister Salvini was facing pressure to call an early vote doesn't really hit upon the over risks currently troubling the currency. Ahead, we will be more explicit with the depth charges. French GDP and sentiment surveys (Eurozone and Italian) will kick things off. Then we will get into more important 4Q growth readings and the ECB's dual mandate data. That makes for considerable EURUSD volatility potential but limited hope of a clear, prevailing trend. 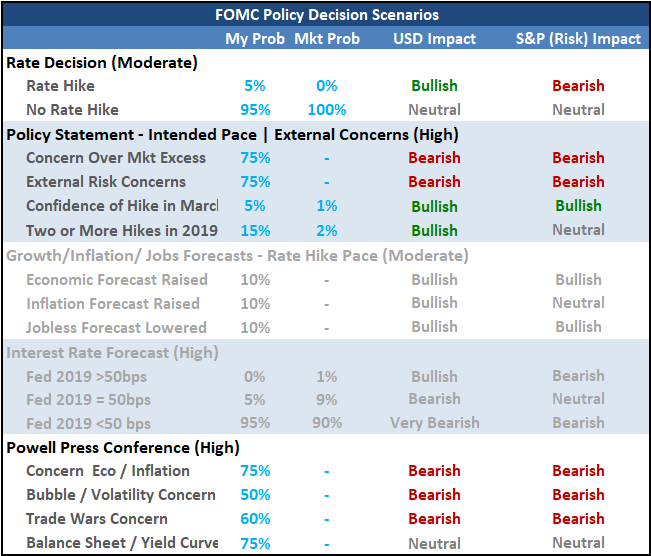 Themes and events with global influence aside, there are a few markets that traders should consider for less complicated pictures - whether that means clear opportunity or not remains to be seen. The Australian Dollar has absorbed a rather lackluster 4Q CPI update this morning, but the currencies response was notable enough. I am particularly fond of the technical view of USDMXN and its concentrated fundamental focus. While the Dollar is a complicated currency itself, the risk view and monetary policy contrast are rather straight forward. The Mexican 4Q GDP reading will be of interest though, especially with the US growth update delayed from its post date today. In commodities, crude oil was unable to make anything of Monday's tumble. The commodity continues to carve out the right shoulder on an inverse head-and-shoulders pattern. OPEC and non-OPEC production rumors continue to churn, but I would look to the demand side of the equation to make any fundamental convictions. In contrast to the check against a trend development in crude, gold took the occasion to extend its climb. This was readily apparent in XAUUSD, but it is more important to note the metal was marking gains against all of its major counterparts. That is more indicative of the metal's inherent appeal - and potentially a signal of risk through sentiment, political instability and monetary policy intent. We discuss all of this and more in today's Trading Video.