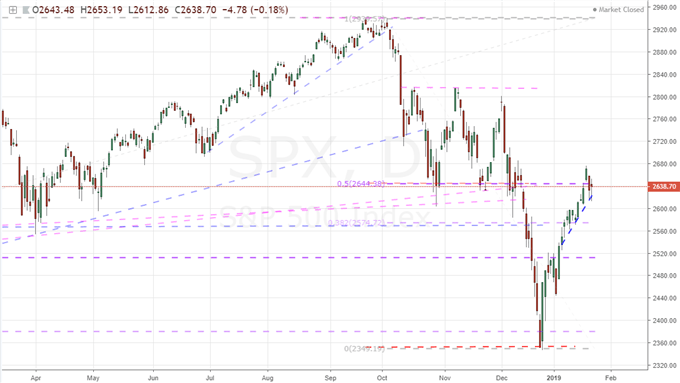 A Questionable Pound Break, Euro Awaits the ECB, Dollar Along for the Ride

A Quiet Day on the Thematic Front...But Not for Long

After so many headlines conveying the painful economic impact the US government shutdown will have and sharp market reaction to mere rumors of trade war progress (and setbacks) these past few weeks, the relative quiet Wednesday was almost deafening. As expansive as the systemic themes that we have been following have been, it was inevitable that there were a few noteworthy updates. However, very little of it was capable of driving a wholesale shift in the speculative rank's view of the broader market. On US-China trade relations, China's Fang Xinghai vice chairman of the China Securities Regulatory Commission stated what many believe: that US President Donald Trump will find a compromise as his measure of success on policy is founded on the performance of the market. There is likely a significant degree of truth to that, but timing must also be accounted for. So long as benchmarks like the S&P 500 and Dow hold back the tide of full-tilt bear market, the tough stance in negotiations will continue. If we do see confidence collapse, it is not exactly clear that a breakthrough on trade will save markets already heading lower. Meanwhile, the US passed through its 33rd day of partial US government shutdown while the GDP costs continue to rack up. Once again, White House economic adviser Hasset was on the wires with unrealistically optimistic assessments of situation. While his warning that a persistent shutdown could lead to zero growth through the first quarter, his suggestion that it would be followed with a "humongous" recovery in the following quarter after the government re-opened is frankly unrealistic. He would go on to say that the probability of a recession in 2020 is "very close to zero" which doesn't align to what most unaffiliated US and supranational groups have assessed. With day three of the Davos forum ahead and none of the critical issues resolved, traders should remain on the lookout. Risk trends reflect frustrating indecision. The S&P 500 marked a critical bullish break above the mid-point of its September-December bear wave to close out this past week. Instead of mounting follow through, the index stalled immediately after the actionable move. Many technicians would consider this a high risk of a false-breakout-reversal to seize. Yet, that too hasn't come to fruition. It seems markets are volatile and hanging on high profile fundamental threats but without the reliable motivation that would make the connection tradable. Yet, we can't spin our tires on these key themes forever...if for no other reason that the passage of time without resolution will bring unmistakable economic and financial fallout.

For the title of top market mover this past session, there was really no competition mounted against the British Pound. GBPUSD charged its biggest single-day rally since December 12 and in turn earned a break above trendline resistance that stretches back to May. That is no small technical feat, and the 200-day simple moving average immediately at hand only raises the stakes even further. Such a move could be a collaborative effort between its two components or unbalanced drive of just one. It certainly wasn't a Dollar contribution whether wholly or in part. Looking to the Greenback's performance across the market, bearing and intensity were uneven. That isn't exactly surprising when we consider the tepid headlines and docket for the currency. The modest improvement in housing prices and drop in weekly mortgage applications doesn't course correct any major fundamental themes for the benchmark. The unscheduled headlines meanwhile were not supportive but neither were they novel. Instead, it seems the Dollar's modest slide (via DXY and an equally-weighted index) was the cumulative influence of a stronger Euro, Pound and Aussie Dollar. In this mix, the most impressive performance was from the Sterling. The currency's rally versus the Dollar, Euro and Canadian Dollar in particular scratch meaningful technical itches. Yet, what should expect from such a pointed move from this major? What was the spark that drove the past session's move? There was some offhand Brexit rhetoric from the likes of the UK Brexit minister, the EU's Moscovici and rumor that remainer MPs were strategizing the avoidance of a hard Brexit. None of it was new or particularly remarkable. If that is the case, we shouldn't raise our expectations of the Pound's charge too high. What's more, the anticipation of unanswered thematic risk - namely Tuesday's Plan B Brexit proposal vote - can turn the market on its head. Committing to a bullish breakout or attempting to pursue the move into a productive reversal is not likely a worthwhile endeavor. 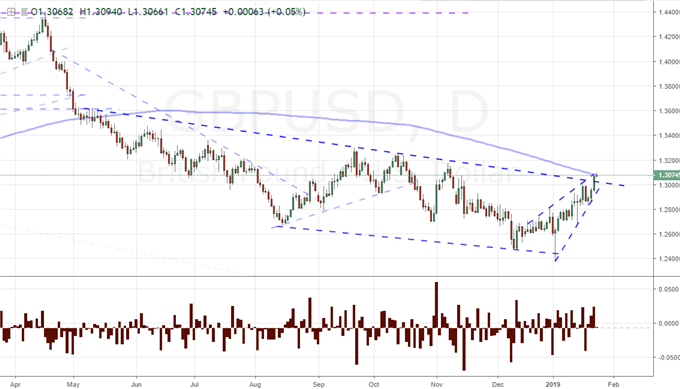 Looking out over the next 24 hours, there are a few events on the docket worth tracking and there is always the chance that a systemic them can be stirred to life. However, there is one currency that promises reasonably high probability of a strong response to scheduled event risk. The Euro is currently carving out a passive range that is apparent with both an equally-weighted Euro index and the benchmark EURUSD exchange rate (still sporting one of the smallest mid-term ranges we have seen since mid-2014). Statistically, these are unusually quiet trading conditions that are bound to normalize given enough time. That is because, over a longer period of time, speculative activity will inevitably stumble upon a meaningful fundamental spark that will meet a willing market. That charge may come in the upcoming session. On the data side, the January PMIs for the Euro-area are good proxies for GDP. Given the steady downgrade in growth forecasts for Europe and the rest of world as of late, these figures will go a long way to curb or inflame fears. The real threat will be centered on the European Central Bank (ECB) rate decision. One of the most dovish major policy groups, the ECB ended its QE program as of this past month. However, the timing is proving remarkably problematic. With growth forecasts floundering and fears over financial stability rising, many believe the group will be forced to backtrack on plans to normalize. If that is the case, we should expect to see some language to suggest a rate hike timetable is moving back from 2019 to 2020 or even later. The Euro is not floating on much rate-based premium, but there is still plenty of lift to lose if the effort is explicit. 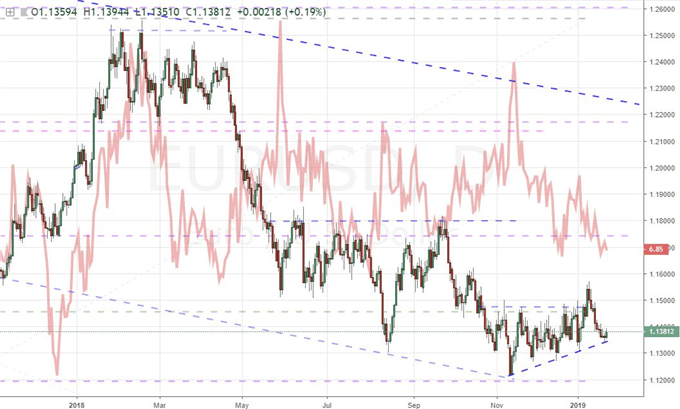 Keeping Tabs on the Yen, Canadian Dollar and Australian Dollar

While much of the focus will be kept on the Pound and Euro moving forward - for good reason - there is reasonable potential from a few other benchmark currencies overthe coming 24-hour session. The Japanese Yen is still being pulled in a few directions between its connection to general risk trends and the unsurprisingly dovish tone of the Bank of Japan (BOJ). The central bank maintained its extraordinary stimulus effort at it most recent meeting, but the hope of an eventual close to the experiment was pushed even further out into the indefinite future after the group softened its growth forecast and lowered core inflation expectations to 0.9 percent - half of their target. The Canadian Dollar is a currency that touts far fewer connections to systemic drivers, but its technical appeal is meaningfully amplified. The Canadian currency is settling into clear patterns with pairs like USDCAD, but its connection to crude oil and general risk trends makes it as much a troubled fundamental reflection as any other major. The Australian Dollar is another open theme and discrete data trade off. The connection to Chinese economic health and trade is clear, but commitment to forging trends on that basis has proven fraught to say the least. More pertinent is the scheduled Australian employment data, which has a history of charging short-term volatility. We discuss all of this and more in today's trading video. 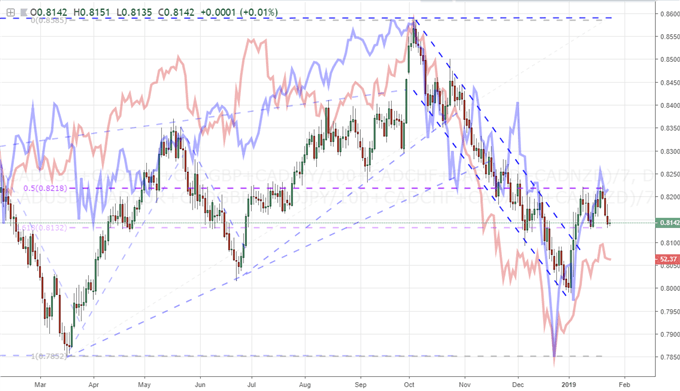