What are the DailyFX analysts' top trading ideas for 2019 and key lessons to take away from 2018? Sign up for bothon the DailyFX Trading Guides page.

There was a tangible flash crash in the FX market this past session. An extreme market move in a remarkably short amount of time speaks to conditions that are far outside the normal and should in turn raise our caution. Most of the attention went to USDJPY and other Yen-based crosses which suffered an incredible swoon through Thursday morning only to recover much or most or he lost ground by the end of the day. This exceptional intraday reversal would leave us with 'tails' that technical traders often associate to reversals - though we should not be so cavalier to presume this will be a natural progression. Instead, the sudden charge of volatility should set off alarms in traders' minds. While it is the nature of 'flash crashes' to occur suddenly, they occur only when market conditions seed the exceptionally unusual moves. In other words, there must be a particularly unstable combination of speculative bias, sensitivity to headlines and persistently thin liquidity to render such a development. What's more, these destructive trade conditions were not isolated to the Yen. Australian and New Zealand Dollar pairs exhibited exceptional volatility around the same time, as did the British Pound. This suggests some appreciation for the headline catalyst paraded at the time but also a willingness to abandon all assets (currencies) that are saddled with their own fundamental troubles. Market conditions will always dictate how fundamentals and technicals will play out, so it behooves us to keep disciplined vigilance even if the entire financial system isn't presently collapsing. 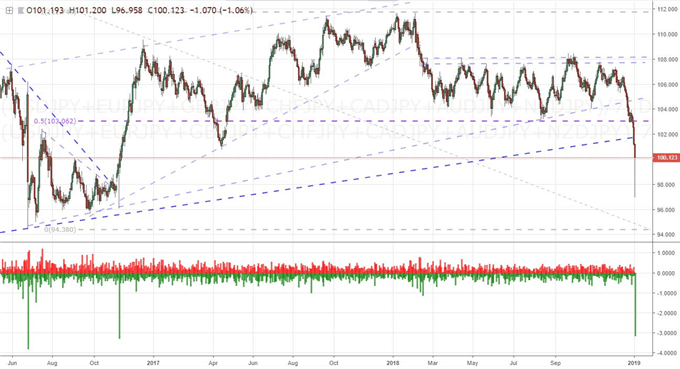 Risk Aversion Doesn't Show Up the Same for All Risk Assets

Considering the intensity of risk aversion experienced by the likes of the Yen cross-based carry trades, it is otherwise remarkable that risk trends across the markets were generally stoic this past session. Globally, equities were leaning slightly lower but with no intent to establish a full-scale trend. High yield fixed income, commodities (as a risk asset) and emerging markets were all in a holding pattern. That is remarkable given the flash crash and the performance of US equity indices. The S&P 500 and Dow put in for a meaningful slide this past session without committing single-handedly to new multi-year lows or establishing a clear bull trend. Nevertheless, the timing of the drop in technical terms is meaningful as it acts to confirm former support as new resistance - a stage in the progression of a reversal. We could chalk this slide up to the downgraded Apple revenue guidance as the once-$1 trillion market cap company is fast sinking in investors' minds, but that is too flimsy a charge for a reliable trend. Tapping into the trade wars vein does more to remind us that there are material consequences to the jabs that political pressure and economic developments are taking on the financial system. The Citi US economic surprise index has dropped to 2017 lows and warnings of an economic stall out are becoming commonplace even among the typical cheerleaders. In this environment, key earning guidance, a US government shutdown or the US tempting fate by attempting to talk down the Chinese economy posses a serious threat. 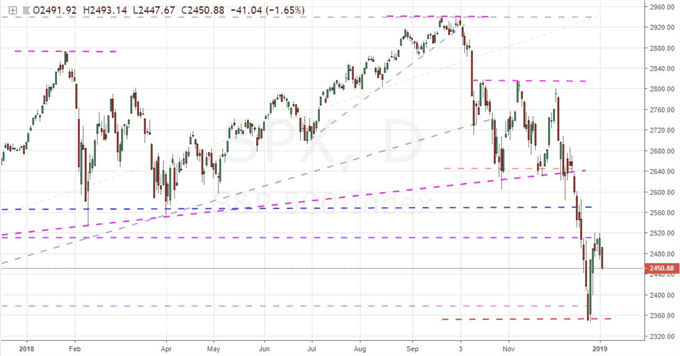 As US equities underperformed global counterparts this past session, so to did the Dollar slide versus its major counterparts. On the systemic side, the blowback to corporate America from the Trump Administration's trade war is starting to become troublingly clear. With global growth already leveling out, an overt threat to the US economy specifically does the Greenback few favors when it is also at risk of losing capital due to downgraded rate Fed rate forecasts. In fact, this past session, the ISM manufacturing activity report took its sharpest single-month decline since October 2008 (the height of the Great Financial Crisis) with the new orders component posting a staggering drop from 62.1 to 51.1. There is little mistaking the impact here. Meanwhile, another of President Trump's economic advisers (Kevin Hassett) has joined in the effort to talk down its economic peer by saying there were "signs the Chinese economy is slowing sharply." They should be careful as fear will be contagious moving forward - even from China. Ahead, as we evaluate the impact of trade wars and political instability for Dollar influence, we have the 'convenience' of a direct, high-profile event risk on tap: December NFPs. With the bias shifting underneath us such that negative updates are met with greater market movement, don't be surprised if the market discounts a positive update but scrambles on a shortfall for payrolls, participation or earnings. One way or the other, I'm particularly skeptical of the market's ability to charge a trend for the Dollar. 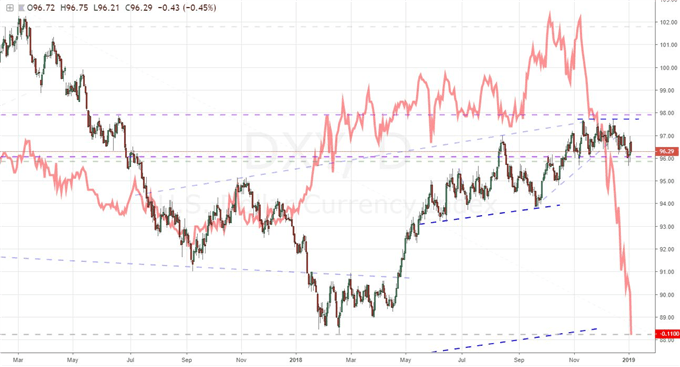 With flash crashes and NFPs, it is difficult to register anything else going on in the markets at the moment. That said, active traders should still keep line of sight on critical fundamental themes. For example, the Euro exhibited a remarkable level of volatility this past session. That likely has less to do with the ECB's dovish shifting trajectory or the political instability in Germany, France and Italy; and more to do with the news that the central bank had taken over Italy's 10th largest lender. That is unlikely to catalyze into a regional financial crisis, but it reminds us of what is at stake. There isn't even so much unfamiliarity when it comes to the Brexit and the British Pound. It was reported that Prime Minister May is on track to lose the January 14/15 vote on her proposed Brexit deal, the Sterling is not going to collapse further until it is clear that bears have the right of way to further drive the currency lower. Outside of FX, the commodity market should be monitored closely for systemic signals as much as direct trading opportunities. Crude oil exhibited another jolt of volatility but refused to extend recovery with reported OPEC production cuts struggling to offset the drop in assumed demand from global growth forecasts - much like global yields. And amid all this flight to quality, we have a steady rise in gold prices. It may not be the most aggressive pace higher, but the commodity's climb is unmistakable. We discuss all of this and more in today's Trading Video. 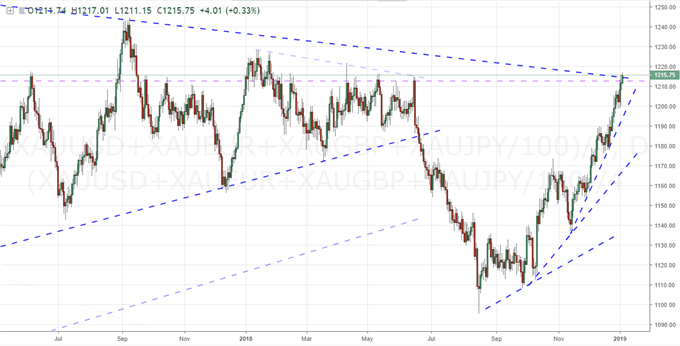