Risk Aversion is Wrapping the World and Spreading Across Assets

For those that are expecting the selling pressure to relent and markets to stabilize 'any moment now', it may be a good time to start enacting high-risk contingency plans. We continue to defy the convention whereby the final full week of liquidity of the trading year experiences a sharp drop in volatility with a historical lean towards restrained gains. What we are seeing from benchmark risk assets is the antithesis of that reassuring market environment where investors are encouraged to check out early to get a jump start on the holidays. Though risk aversion hasn't really let up since it began last week, the post-Fed intensity has added a fundamental anchor upon which we are being drug lower. We have seen numerous such events fail to jump into subsequent trading sessions, but the unexpectedly hawkish forecast from the world's largest central bank proved one of those events that would not be reserved for US pain. Asian equities (the Nikkei 225, Shanghai Composite, ASX 200, etc) followed on with their own selloff and European indices (DAX, CAC40, FTSE 100, etc) joined with their own dive. Then, when US markets came back online for Thursday trade, we were met with a significant gap lower. Now there is little disputing the S&P 500’s head-and-shoulders reversal pattern progression and the Nasdaq 100 is on the cusp of a technical bear market. What's more than the intensity and duration of the move, we have exceptional breadth. Many different assets with a sentiment rating succumbed to the same pressure. In particular, high yield fixed income (via the HYG ETF) suffered a particularly severe loss through the morning - before the top headline for the day crossed the wires. 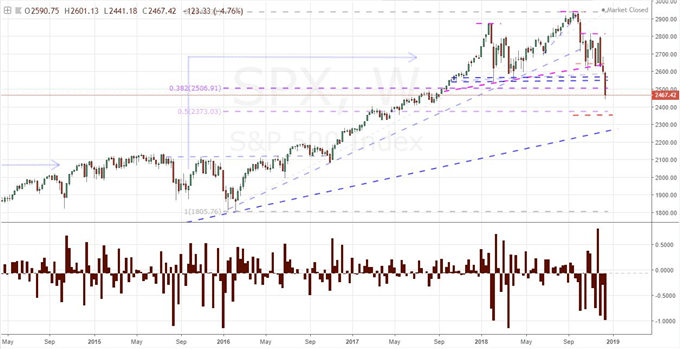 Just How Financial Destabilizing Would a US Government Shutdown Be?

There are a number of systemic fundamental risks that have unnerved the capital markets through these past months. However, many of these open threats seem to have been offered relief recently. The US-China trade war is in a 90-day cease fire on further tariffs. Italy seems to have found a path to negotiation with the European Union. The Fed may have thrown speculative interests for a loop, but the global monetary policy balance has generally shifted towards greater accommodation - or more accurately, pulled back from hawkish intent. Yet, one of these supposed points of improvement was reversed this past session. Though not as high on investors' threat assessment lists, the risk of a US government shutdown is not a small matter. It will lower US economic growth, exacerbate liquidity issues and threaten the US sovereign credit quality and Treasury yields. It was reported some days ago that President Trump recognizing how unpopular such a course of action would be was backing off his opposition to a partial shutdown to keep up pressure for funding on his long-promised border wall. Well, apparently, he was not going to stick to that path as he announced that he was considering pushing the standoff forward. Risk aversion was already under pressure before this headline broke, but the news certainly made matters worse. This is not the first game of chicken the US government has played over a shutdown. Threats and an actual closure translated into remarkably little market trouble. The reason for this restraint was the underlying speculative bias. With the market rank sporting a bullish course, positive news was greedily absorbed while negative updates were more or less overlooked. We are dealing with exactly the opposite conditions today. 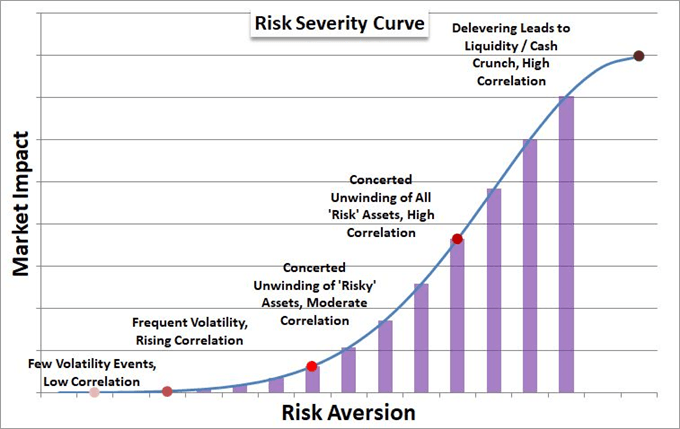 BOE and BOJ Steadfast Course Only Fosters Recognition of Helplessness

Risk trends are the principal concern when navigating the markets, but they aren't the only fundamental theme with influence. Monetary policy has seen its clout grow exponentially following the Fed's decision to maintain a remarkably hawkish pace in defiance of market expectations and the President's calls for relief. The two central bank updates we registered after the US group's call could not have been any more different. The Bank of Japan (BOJ) issued no surprises - in policy, forecast or commitment to do whatever it took to stave off another financial crisis. They would keep rates at its extreme low and stick to its commitment to keep the JGB (Japanese Government Bond) yield curve upright and steadfast. Meanwhile, its growth and inflation forecasts were held under pressure which prompted Governor Kuroda to state they had further options should they be warranted in further rate cuts and QE purchases. Given the lack of effectiveness of its current extreme operations, they are no doubt hoping it isn't necessary. For the Bank of England (BOE), the decision to hold rates unchanged surprised no one. They lowered their inflation forecasts owing largely to tumbling oil prices and also stepped down growth forecasts to a 0.2 percent quarterly expansion. The concern here was clearly outside that normal course of policy with the Brexit cutoff date less than 100 days away. Warning a 'no deal' outcome was a growing possibility, the central bank reminded the market - and politicians - of its warning of what will happen should they drive off the cliff. 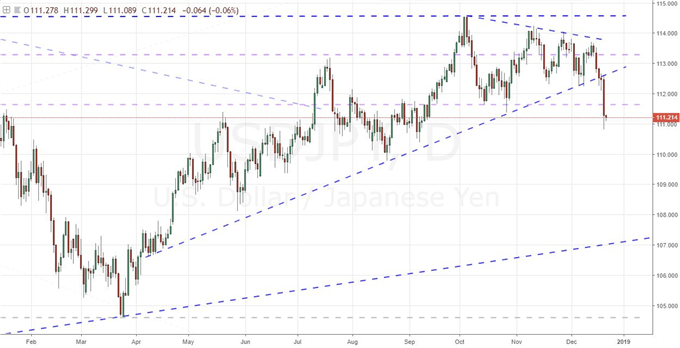 Commodity Currencies are Finally Realigning, So Are Commodities

Relative to the confusion surrounding the Dollar, Pound and Yen; it is refreshing to see relatively steadfast and straightforward moves from the so-called commodity currencies. The Australian Dollar slid this past session despite jobs figures were balanced with a slight bullish bias. The headline figure beat expectations at 37,000 positions, but the full-time figure and uptick in the jobless rate didn’t help circumstances. The New Zealand Dollar's retreat was well earned between the 3Q current account and GDP figures released earlier this week. That currency also has a lot of recently-established premium that can be worked off - especially if risk aversion continues to weigh. As for the Canadian Dollar, its bear trend is far better established, but the range of event risk through Friday - retail sales, October GDP and a quarterly business sentiment from the BOC - deserves closer observation in these reactive markets. Speaking of commodities, US-based WTI crude oil has not pushed a new low in a few days. That said, its extremely painful bear trend is making no effort to stage a genuine recovery. Gold on the other hand is making actual progress. It will be difficult to turn its five-month high into a lasting trend with a break of the 2018 midpoint, but the implications of its safe haven appeal are hard to miss. Remember what this commodity can represent in risk aversion with a particular quality undermining confidence in fiat assets. We discuss all of this and more in today's Trading Video. 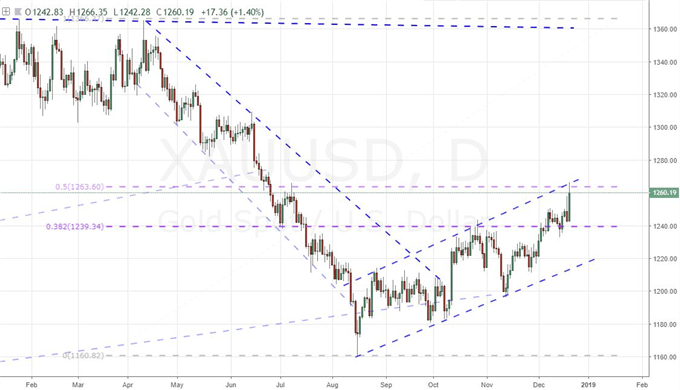