The Fed Defies the Market's and Trump's Calls for Policy Relief

Pressure on the Federal Reserve had grown exponentially these past weeks. Against the backdrop of slowing growth forecasts, rising fear in financial market stability and a ballooning US budget deficit; there naturally arose expectations for the central bank to significantly temper its planned pace of tightening. For those worried about tipping into a bear market or economic retrenchment heading into the new year, it was inconceivable that the policy authority would hike the benchmark rate four a fourth time this year, pursue further steady tightening through 2019 and allow the balance sheet reductions continue at pace. Those hoping for this external support for wavering trends, however, were delivered a harsh dose of reality Wednesday afternoon. The Fed did trim its course modestly from the previous comprehensive update in September. Yet, the breathing room was far less than what was hoped for from desperate capital market and economic bulls. Defying President Trump's calls for the central bank to "take the win" and completely through the brakes, the group hiked the benchmark range another 25 basis point to 2.25-2.50 percent. Swaps and Fed Funds futures showed the market expected the Fed would follow through with that move as the ground was already clearly laid, but the masses believed surely they would lower the forecast for rates in 2019 and beyond. The Summary of Economic Projections (SEP) did indeed lower its consensus in September from three further rate hikes to only two. That would seem significant except, the market had priced even that degree of hawkishness at a 10 percent probability. Needless to say, they were surprised and fear started to rise in investors' throats quickly. 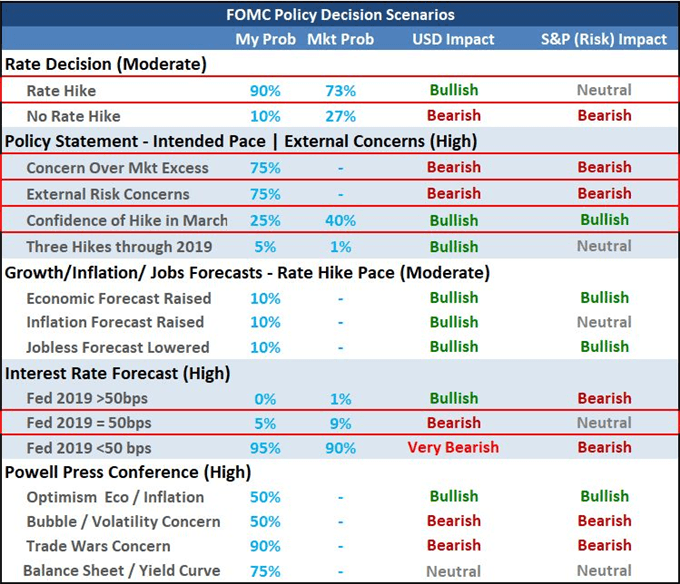 A Prominent Technical Move Versus an Inevitable Liquidity Drain

In response to the central bank's unexpected defiance of the market's cries for support, speculative appetite understandably faltered. The S&P 500, already flirting with a systemic technical break, dropped another 1.5 percent. This pushed the favorite risk metric to its lowest level since September 2017. Yet, more than make a statistical milestone, this drop crushes any lingering hope that liquidity is simply distorting the accuracy of technical boundaries while the spirit of the support holds. Looking at a weekly or monthly chart of this US equity index (or the Dow for that matter), it is easy to spot the prominent progression on a high-level technical pattern. With Wednesday's drop, we have definitively cleared the neckline on a head-and-shoulders pattern which has formed throughout 2018. One of the most important criteria for such reversal patterns is a strong prevailing trend to reverse. The record-breaking, decade-long bull trend from 2009 is as substantive a build up as they come. As prominent and clean as the instigating move may be, however, follow through may be difficult to establish through the immediate future. The difficulty is the lack of liquidity to productively transmit that sense of panic. However, there is far too much at risk given the depths of complacency built up over the years to simply fall back on seasonality to act as a reliable stabilizer. Traders should check for breadth of the speculative slide both across asset classes and into subsequent time frames. Emerging market, high-yield and carry assets that traded through the US hours alongside the S&P 500 were also under clear pressure. Though perhaps more important to the establishment of a genuine trend is the spillover of selling pressure into the subsequent Asian and European trading sessions to wrap back around to Thursday's New York session. Meanwhile, the bullish implications for the Greenback only earned enough of an end-of-day recovery to push the DXY Index back to the middle of its past two-months' range. 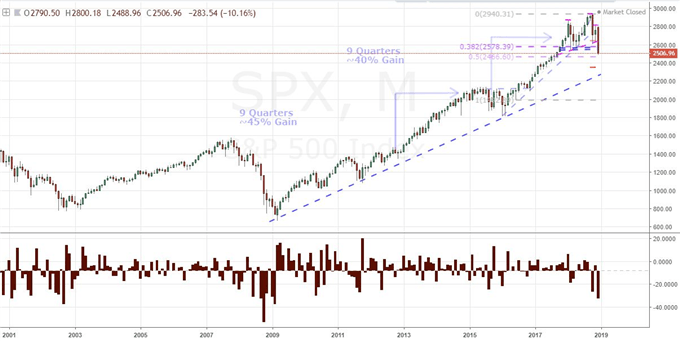 While No FOMC Equivalents, the BOE and BOJ Decisions Still Matter

There is incredible, potential gravity behind the US central bank's monetary policy call this past session. As the world's largest central bank, the first to adopt the now-standard stimulus program in mass scale and to make the first move to truly reduce its unorthodox level of support; the stability, strain or crisis this particular group renders can readily escalate into a global detonator for global sentiment. That said, much of the scope of this single central bank's influence is tied to the contrast it draws to global counterparts. On the opposite end of the policy spectrum for the largest banks, we have the Bank of Japan (BOJ). This group is no stranger to zero rates as it has hovered around that floor for decades. The stimulus program it adopted so enthusiastically has broken records when measuring the balance sheet relative to GDP; and yet, there is little inflation to speak of, uneven growth with even capital markets still flagging US counterparts. This extreme effort is the epitome of ineffective. Nevertheless, the desperate QE program targeting 10-year Japanese Government Bond (JGB) yields defines the extreme that of its global counterparts can revert to should there be a fracture in global financial stability. As for the Bank of England (BOE) rate decision scheduled for the European session, we are looking at a group that carried the designation of a 'potential hawk'. Since the Brexit took on a septic quality, monetary policy has grown to be considered an unreliable rudder. Rather than anticipate any change in policy, we should monitor event for any updates on the lumbering approach of the official Brexit date (March 29). 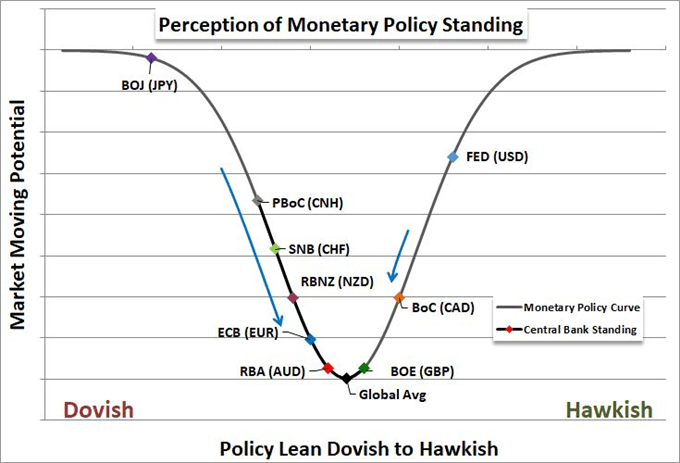 In contrast to the event-centric but restrained outlook surrounding the Pound and Yen, the Canadian Dollar and New Zealand are not so focused on singular developments but have produced significant progress. In fact, both seem to be moving into position for technically-amplified moves. For the Loonie, inflation figures this past session further eased back to reinforce the reality that the Bank of Canada (BOC) may be done with its policy tightening regime for the indefinite future. October GDP and retail sales data due on Friday will add another possible layer to the fundamental picture. Yet, how much drive is there behind this additional bearish motivation? The currency is already deep into a multi-month slide. The move is registered easily via USDCAD which broke notable resistance to trade at 18-month highs this week. The New Zealand Dollar's recent activity carries the same quality of short-term intensity, but it doesn't have the same sense of being winded like the Loonie. Following two months of remarkable and seemingly fundamental-detached climb, the Kiwi Dollar suffered a painful slip this week from high profile resistance with the help of fundamental docket items. The third quarter current account balance deficit started the move and this morning's GDP reading sealed the dour look. How much momentum can we expected from these seemingly high potential setups? Liquidity is a universal amplifier and curb depending on the conditions. That said, moving into range is always the path of least resistance. We discuss all of this and more in today's quick Trading Video.