Did the S&P 500 Just Set Up a True Reversal in December, Before the Fed?

A Very Threatening Move at the Least Likely Time

The markets are defying some extraordinary convention to start this trading week. Already, the persistence of volatility into this trading month was atypical - though not exactly unwarranted given the complacency and the build up of fundamental threats over time. That said, we could still see a semi-normal scenario in which the second half of the month drains liquidity and in turn tames risk asset...at least until the trading rank is topped off again for 2019. Instead, we kick off this new week with an a sharp decline in US equity indices. This is not just a strong, single-session move. The 2 percent drop from the S&P 500 and Dow were impressive, but it was where it has led us that is triggering alarms for investors. The S&P 500 - a favorite amongst speculators for its derivative-laden reflection of the 'the market' - closed at its lowest level since October 2017. If I were so inclined, I would point out this was a provocative break to suggest we are seeing progress on a head-and-shoulders reversal that the market spent all of 2018 setting up. That would be premature to call though. Another perspective for which it is too early to claim unchecked fear on is the recognition that at its current rate, the index is floating its worst December performance in over eight decades. That is a resounding repudiation of the notion that December historically represents one of the strongest months of the year for equities with the most restrained activity measures. Yet, before panic takes over, it is worth noting that indeed liquidity will drain next week - for better or worse - and the recent US tumble is far outpacing any of its global risk counterparts. Perhaps the fear just needs to catch up to other regions and assets, but at present, the market seems to be working off some of the excess premium afforded US markets as can be seen in relationships like the S&P 500 relative to VEU. 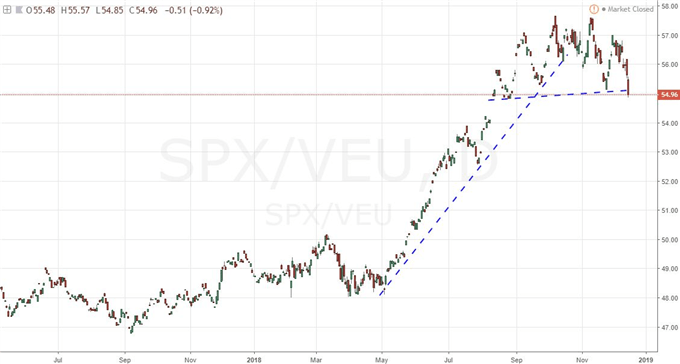 Another reason the sharp move to start this week was so exceptional was that it contradicted the usual moderation expected in the lead up to major event risk. The Fed rate decision is already a high profile fundamental charge in normal conditions, but what we are dealing with is far from typical. The Fed is heavily anticipated to continue its path of policy normalization for a fourth rate hike this year. There is no other major central bank that is even close to its hawkish tempo. What's more, this event will include forecasting in the Summary of Economic Projections (SEP) that the market has decided to watch very closely for what the future holds for policy from the world's largest central bank with obvious implications to global growth and financial conditions. Perhaps there is growing recognition for the dependency risk trends have placed upon years of extreme accommodation from the world's largest central banks. That would be reasonable given volatility and how far the Fed has progressed in its bid towards normalizing policy. Backing out of forward guidance slowly however is important to promoting stability. Therein lies the rub. The Trump administration has drawn greater attention to the central bank's policies likely in a bid to discourage further tightening. There remains separation of powers between the executive branch and central bank, but the market can - and has - changed the Fed's course in the past. The President remarked that the Fed should "take the win" as the Dollar is strong, there is "virtually no inflation" and other countries are 'blowing up'. In turn, his trade policy director Peter Navarro said the Fed was the greatest threat to US growth going forward. 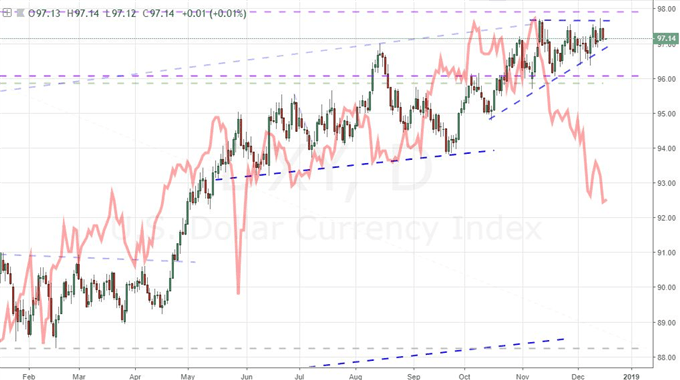 In more familiar news, the chaos surrounding the Brexit negotiations remains properly unhinged. Following the Prime Minister's no-confidence survival last week (which followed a week of Parliament finding her in contempt and affording itself more power over navigation in the event of a 'no deal'), May announced the next vote would occur on January 14th. She would also suggest that she does not expect any breakthroughs with the EU until next year and again that she would not consider a second referendum. Meanwhile it was reported that the Government heard legal advice on extending the timeline for Article 50 which May had previously remarked they would strictly stick to. If that is the case, suggestions that the European Commission was not going to offer any 'managed no deal' scenarios to the UK when it releases its Brexit contingency guidelines on Wednesday should raise the interest in considering that extension more seriously. Reminding us of what is at stake, rating agency Fitch warned that a no deal would almost certainly trigger a credit rating downgrade for the country. That is similar in nature to the BoE's regular warnings with its QIR (Quarterly Inflation Report) updates and through key members' testimony before Parliament. We will likely get another version of that warning to accompany the group's policy ruling on Thursday - though this is not one of the meetings that includes the comprehensive report. Trading the Sterling is a dangerous proposition at present. However, that risk has been well accounted given the complications. 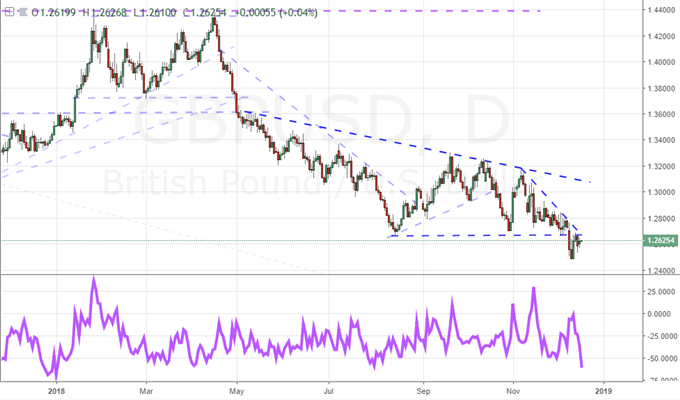 The Appeal of Watching the New Zealand Dollar and Crude Oil

As complicated and overwhelming as the Fed decision and Brexit may be, there are areas of the market that are significantly less difficult to read. The Canadian Dollar for example has established a remarkably consistent slide these past few months after the NAFTA issues were seemingly resolved and the Bank of Canada reigned in its monetary policy intent. It is unclear what is presently directing it but the currency is doing more than its fair share to raise interest in a pair like USDCAD currently hitting technical restrictions. The New Zealand Dollar meanwhile has run an incredible bull run these past few months in direct defiance of the known fundamentals. That charge has pushed the currency to levels of speculative excess, and now targeted fundamentals are back on the menu. Later this week, we will have quarterly trade (current account) and GDP updates which carry more than a little weight for the currency's health update. Left unchecked, it is likely that the Kiwi would deflate as the market's settled on speculative excess; but properly motivated, the retreat could be more fruitful. In an unrelated asset class, commodities have seen a considerable shake up from crude oil. The benchmark energy product cracked the seemingly unthinkable 50 floor on its way to amplify its losses from early October to approximately 36 percent. That may not be as dramatic as natural gas which crashed through the floor of wedge support recently tipping into a sharp tumble, but the accumulated losses are remarkable. We discuss all of this and more in today's Trading Video. 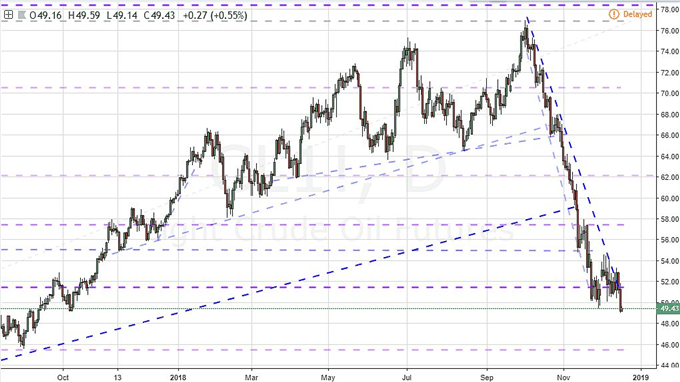