Has the G20 summit and trade wars in general changed the market's views of the Dollar majors? Is a growing risk of a no-deal Brexit changing FX traders GBPUSD exposure? See how retail FX and CFD traders are positioning on the majors, indices and commodities on the DailyFX Sentiment page.

With the close of the past week, we have also brought an end to the month of November. For markets, this period diverged from norms in both performance for risk assets and the steadying of volatility. It managed this due in large part to the convergence of a recognition for excessive risk exposure built up over the past decade and a host of wide-reaching fundamental threats to market stability. And, the fact that these issues - both fundamental and environmental - have not been resolved should absolutely determine our trading/investing approach for the final month of the year and beyond. If we were to refer to the statistical averages ('seasonality'), there is a noteworthy drop in both volume and volatility through December paired with (or perhaps more appropriately, resulting in) a lift in risk assets. While it is reasonable to believe that liquidity will still be impaired by the market closures, accounting practices and simple habits associated to the period; assuming quiet against such an unsteady fundamental backdrop would be the sort of exceptional complacency that led traders headlong into the sort of extreme de-leveraging experienced through February and October. The combination of thinned markets and amplified volatility can cause havoc for traditional buy-and-hold strategies. It can frankly prove extremely problematic for most approaches that depend on consistency, are ill-equipped for unexpected catalysts and that are not flexible with trade and risk management. Unfortunately, that encompasses most strategies from both the retail and the professional class.

Chart of the S&P 500 and Volume Monthly Performance 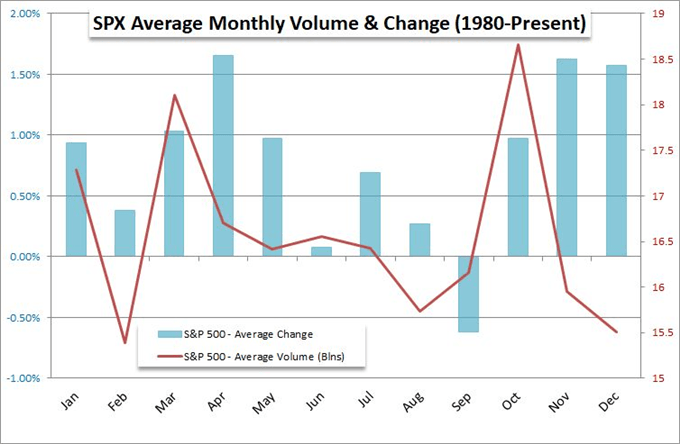 Trade Wars is More Than US and China, But Focus On Their Feud First

The first concern heading into this new trading week is a critical update on the world's most wide-ranging financial and economic threat: trade wars. There aren't many events backed by an explicit time frame that can be reasonably expected to generate a significant change in the backdrop of active protectionism. The G20 meeting over the weekend is one such event. Trade will certainly be an official topic of conversation, but the polite accusations that the United States is working against a collaborative global growth and speculative proliferation will fall on deaf ears. Where we can expect actual change - for better or worse - is in the relationship between the United States and China. This past week, US President Trump stated that he intends to push forward with plans to raise the tariff rate on the $200 billion in goods the administration announced taxes on a few months ago should no deal be struck. Further, he warned that the last stretch of tariffs would be applied to the remaining $267 billion of imported Chinese goods to encompass all of China's shipments to the United States. That makes the planned dinner between President's Xi and Trump a market mover regardless of the outcome. If no compromise is reached, the market will respond with a greater sense of concern over the state of risk trends moving forward. Alternatively, if they reach an agreement - or simply just walk back the threats - the market will respond with relief. Though the market believes the latter scenario is highly unlikely, I have options ready should it be realized: USDCNH on a break below 6.9000 and/or AUDUSD completing an inverse head-and-shoulders neckline break above 0.7330. And, while our attention will be drawn to one particular aspect of this summit, remain on guard in case Trump announces intent to raise auto tariffs which would widen the trade war to the EU and Japan. 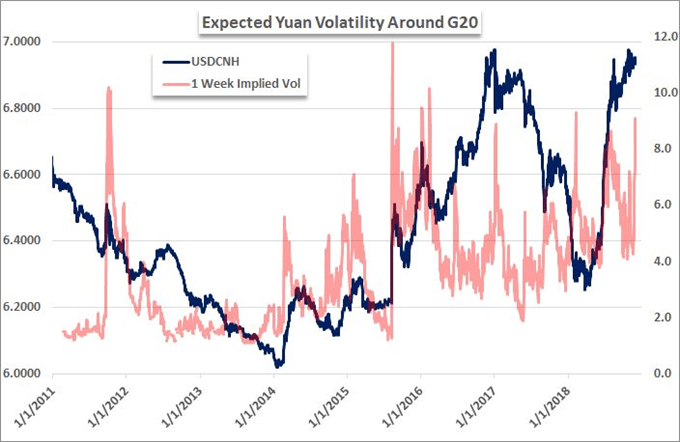 While there is a considerable array of possible fundamental themes and catalysts for key risk assets such as the S&P 500 to navigate over the coming week, the asset with the most complicated landscape has to be the US Dollar. As of last week, the profile of rate speculation has picked up significantly. Fed Chairman Jerome Powell's remarks were poured over by the market and for good reason - the central bank has made it clear that its primary policy tool is not rate hikes or reduction of its balance sheet but rather the forward guidance that it uses to discount changes before they are made. Last week, the change in rhetoric was subtle, but clearly done with intent. We will see just how committed he and his colleagues are in the coming week when he testifies before the Joint Economic Committee and then look for data to back up the perspective through the November employment statistics on Friday. Another indirect but utterly effective theme to follow for the Greenback's performance is the collective performance of its major counterparts. Should the Euro, Pound and Yen all continue to experience their individual fundamental issues, the aggregate benefit for the USD will be significant - as it has in previous years. One other theme that is growing profile is the number of key people and institutions that are voicing concern over the Dollar's strength. The Trump administration has lamented the strong currency indirectly (USDCNH, EURUSD, rate policy), the Fed mentioned it as a risk in its financial stability report and the IMF warned its lift could lead to a crisis for emerging markets. No party has taken decisive action to deflate the currency, but such a common interest from so many parties will eventually find its way to the market. 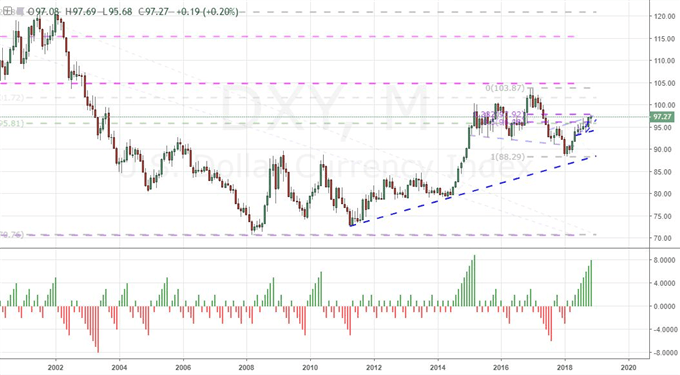 Watch the Euro and Pound for Themes; Oil, Loonie and Aussie for Events

Though there are leading themes and events to keep track over the coming week, there is considerable market-moving fundamental potential for many of the majors across the FX market, indices and commodities. Aside from the omnipresent risk trends, the rise of geopolitical pressures is a spreading threat to stability. Aside from the drama in Washington DC and the international pressure growing for Saudi Arabia and Iran, there remain a number of regional interests for the majors. For the Pound, the focus has never turned away from Brexit. Prime Minister May is attempting to bolster support for her plan before the December 11th Parliamentary vote, but reports are not encouraging. The Sterling has been reticent to tumble on the growing risk of a no-deal, but that shouldn't be taken to mean it is fully discounted. This week, the BOE Governor will speak before Parliament to deliver yet another stark warning and Moody's will update its credit rating on the UK on Friday. For the Euro, Italy's fiscal profligacy remains a test of existential stability with the possibility of actual penalties implemented. That said, traders should keep ECB intent in their direct field of vision following a slide in Eurozone inflation and remarks of financial stability concerns from the bank. If we are looking for more targeted event risk ahead, both the Australian and Canadian Dollars will have key data to pick up on. The Loonie will respond to Friday jobs statistics, but the BOC rate decision is arguably one of the most pressing policy courses amongst the major. the Aussie Dollar may not have the same intensity in its own RBA rate decision, but the sheer volume of updates (3Q GDP, 3Q current account, trade balance, etc) will test an otherwise remarkable lift from AUD. Even crude oil will focus on a discreet event rather than a loose attachment to demand and speculative positioning. An OPEC meeting will find some members pushing aggressively for a quota change after the commodity’s slump. We discuss all of this and more in this weekend Trading Video. 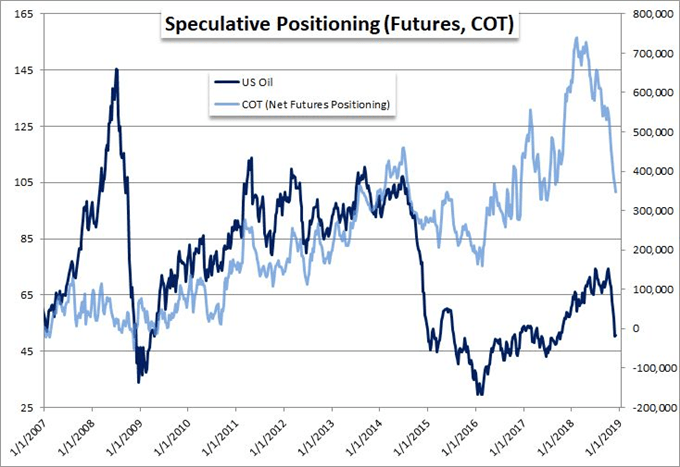