A Modest Bounce Against Abject Pain

Monday kicked off the new trading week and the anticipated return of liquidity following the Thanksgiving lull. If we took the opening session's performance at face value, it would seem 'things are looking up' (see this report on the holiday sales projection). Yet, we should judge the situation in a more cold, calculating and skeptical manner. It is true that most of the risk-leaning assets that I like to monitor for a broad 'sentiment' assessment closed a gain through the day. That said, any sense of conviction placed upon this performance would be making a serious commitment to complacency. This past week's performance should stand out like a raw scar in our evaluation of the landscape. Despite the significant drain on liquidity this past week and a historical seasonal norm of quiet or quietly appreciating markets, what we actually closed was a strong downdraft on risk assets and the worst Thanksgiving week for US indices since 2011. This break from norms is par for course in 2018. The complacent drift higher is no longer to be simply assumed. There is a greater sensitivity to sentiment and a growing list of clear threats against it. The question is how a known retreat in liquidity through the end of the year and a host of holidays will throttle or amplify our course setting. Given last week's trial and the growing concern over financial consistency, I am concerned about what another rolling out of the tide will reveal. 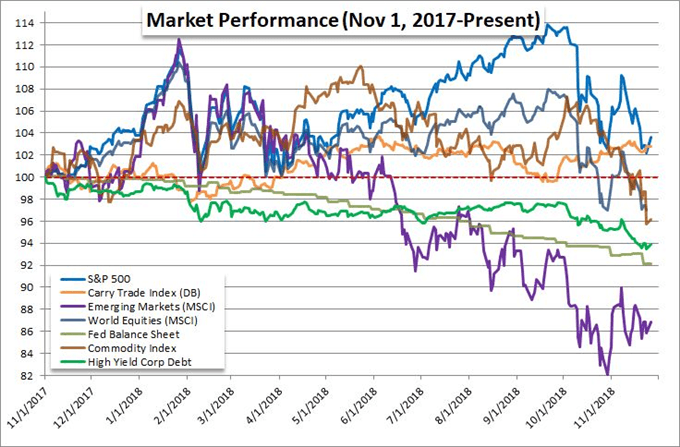 Ensuring Trade Wars are Front-and-Center at the G20

In term of the myriad of overriding themes the markets are currently tracking, the principal concern may once again be the course of global trade wars. Without distracting headlines these past weeks while volatility remained charged, the markets were seeking out motivation and finding it in other corners of our uneven financial system. Perhaps recognizing the fading 'ratings' the standoff was receiving, the US President decided to bring attention back to one of the most prolific disruptions to global growth and capital flow the world has seen in years (see what other key US officials have said about the state of the markets). There was already an elevated threat assessment associated to the frigid state of global trade - and the political connections it promoted - owing to the G20 summit scheduled for Friday and Saturday. That said, the stakes at play were reiterated by the Trump when he made remarks about the state play on this troubled theme. It seemed to start with reports that General Motors (GM) would cut 14,000 from its staff with the underlying suggestion that this was in part due to the loss of competitiveness resulting as a side effect of the trade wars. The President didn't seem to believe that was the case and stated the company should instead close Chinese factors and move the work to the US. He went on to suggest he could also raise a 10 percent tax on iPhones shipped into the US from China, sending the AAPL shares lower afterhours. Addressing China directly, Trump said he saw little chance he could be dissuaded from increasing the tariff rate from 10 to 25 percent on the last wave of $200 billion in the country's imports at the upcoming meeting. And, the thin enthusiasm he voiced suggesting a compromise "could happen" was quickly followed with his warning that otherwise he was ready to move forward with the final tranche of $267 billion worth of further goods which would encompass all of China's shipments to the US. With such rhetoric, it is perhaps so distracting that the recent Russian attack on a Ukrainian ship earns a much lower spot on the headlines. 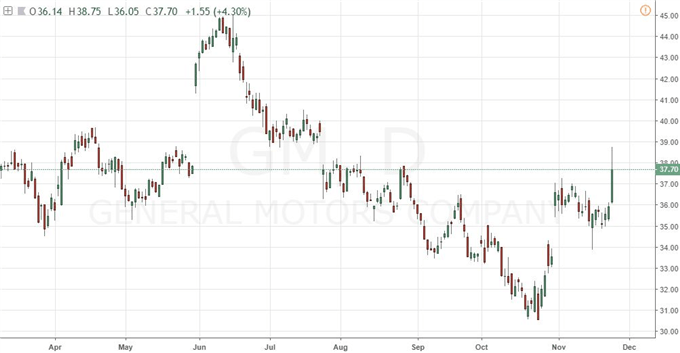 Dollar Has Something Else to Worry Over: Fed Policy

While trade wars is top listing for global markets - and it deserves it - there are other themes that should be monitored very closely for certain regions and currencies. For the Dollar and US capital markets, the standard interest in Fed policy is earning closer observation. This past week, reports suggested the President was upset with Treasury Secretary Steve Mnuchin over the appointment of Jerome Powell as the Chairman of the central bank - anger following his unmasked critique over the group and its leader given their path of steady normalization against the backdrop of a growing deficit and costly trade war. The President's views and pressure are plain to see, but legally the central bank is independent from his - or any other government body's - sway. That said, what if the Fed had to throttle owing to the actual market conditions on the horizon? Would it be construed as a bowing to the pressure which in turn diminishes the group's independence - even if it acts as the 'Fed Put' that so many hope for? Would the Fed calculate the risk of its credibility in weighing whether or not to carry forward rather than turn to data-based caution? There may very well be reason for the group to temper its pace either with the December hike already priced in or the three further moves through 2019 heavily expected by markets and projected directly by the Fed itself via the SEP (summary of economic projections). Inflation has leveled out near target, employment is already at an exceptionally low level, wages are not rising in response to the expected tempo and external threats are growing. Wednesday, Powell is due to speak on bonds and the yield curve. If he were looking for an opportunity to start pumping the breaks on market expectations via forward guidance, this would be it. 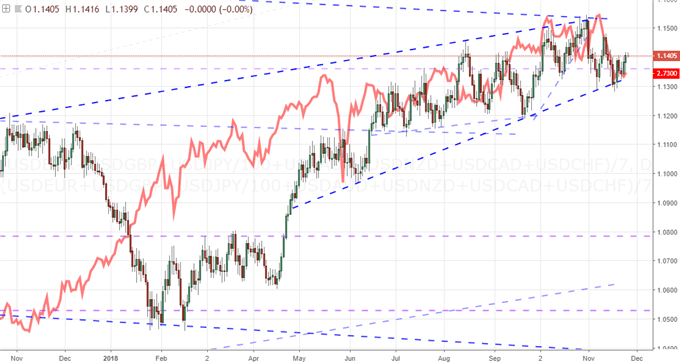 Where the Dollar is awaiting a definitive cue from its fundamental maestro, the Euro and Pound simply tired of being lead into a specific course and then being caught wrong-footed as the circumstances suddenly reverse. For the Euro, the headlines were focused on the Italian budget crisis whereby the country refuses to capitulate to the European Community's demands to rein in spending to meet group-wide requirements. This is an abstract threat with no explicit time frame towards clear escalation and thereby easier for the market to conveniently ignore until it grows into a true crisis. That said, reports that the government leadership in Italy was started to soften its position on rejecting the EU outright did earn a strong climb in the FTSE MIB and Italian government bonds. It didn't, however, earn much traction for the Euro. The recognition that small allowances and the ECB's fading normalization hopes seem to be bleeding through. Skepticism is showing throw for the Pound as well. Reports that the weekend EU27 summit to discuss of the Brexit ended in approval of Prime Minister Theresa May's proposal drew out no cheers from Pound traders. After too many back-and-forths recently, the market now realizes there are a number of parties that need to sign off to get this agreement through - and threading that needle still seems fraught. Keep in mind Parliament's vote on the bill on December 10th or 11th and the Bank of England's (BOE) financial stability report due Wednesday. We discuss all of this and more in today's Trading Video. 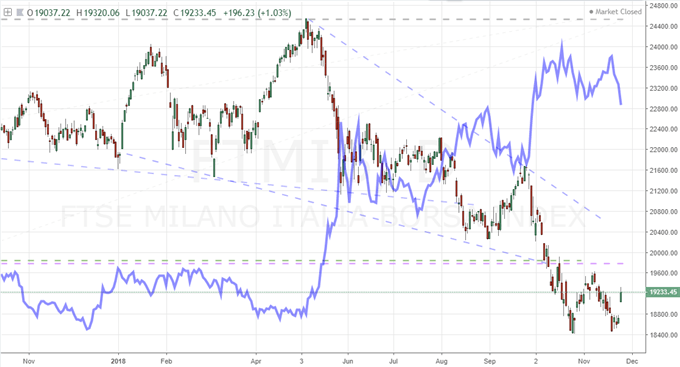