And Now For the Drain in Liquidity

This past trading session reflected exactly the wind-down in speculative effort that was anticipated for one of the more reliable seasonal events of the year. Ahead, the US markets will be offline owing to the US Thanksgiving holiday closure and the following session will be severely throttled due largely to sheer anticipation of history repeating itself. And, though the holiday only really pertains to the US exchanges, the influence of this particular financial hub and the recognition of the seasonal distortion tends to draw in global investors. The recognition of the drain clearly showed through Wednesday with risk benchmarks like US equities putting in a corrective or balancing move before going offline. The S&P 500 stabilized following a two-day tumble punctuated by the second largest gap down on record. This balance would notably be found just before the benchmark made a serious effort to break the next significant measure of support. A similar check registered in European and Asian equities, the emerging market assets and junk bond measures (the HYG posted its first bullish day in 10 trading sessions to end a run that matches the longest slide since August 2010). Meanwhile, the Nasdaq and FAANG are already south of their respective floors and flashing more ominous intent. While there are many measures of 'risk' in the market, a relatively shaper drop from a US trend setter like the tech-heavy Nasdaq 100 compared to the Vanguard All World ex US ETF can signal a deeper sense of fear than just a quick-burn rout. 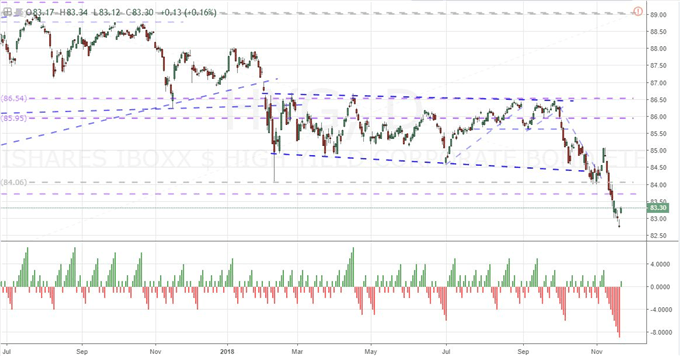 When Market Depth Returns, So Does Concern Over the More Complex Themes

It would be wise to prep for the swoon in activity levels by avoiding unrealistic trade setups and swapping strategies that will underperform given the conditions (trend or break with follow through) with those better suited (such as range and flexible false break). Yet, as reasonable as it is to adapt to the seasonable probabilities, it is important not to let complacency dictate our approach and risk exposure. There are scenarios for which a shock from some other corner of the world can overwhelming the thrown fuse switch in the US break which ultimately can lead to a more extreme risk response. Yet, shy of a financial crisis being triggered, there remains an extraordinarily high border for converting any volatility we come across into a true trend. That said, the tables turn once again come Monday. When the global markets are once again topped off, we will find the speculative rank on the hunt once again looking to evaluate its risk for the still paltry returns to be made. In these next 48 hours, themes that are more likely to find progress through sudden and unexpected updates are more likely to usher in price action. Geopolitical tensions spurred by the likes of even US President Donald Trump and trade wars are viable sparks in this vein. Yet, when the dip in open interest passes the more complicated - but equally-commanding - themes like the normalization of global monetary policy and the general growth trends - will return the active threat screen. This past session, the OECD issued updates on its on growth forecasts. Its anticipation for the 2018 tempo held to 3.7 percent global expansion, but the pace was lowered to 3.5 percent for 2019 and 2020. In part, that moderation is due to trade wars which it warned could cut as much as 0.8 percent in global GDP through 2021 and threats to regions like the emerging markets. Those are all issues that will no doubt show up in discussion at the G20 summit on November 30 to December 1. If a top theme blots out the headlines over the next few days, it can turn thin liquidity into extreme moves with follow through stunted. Should the breaking news come Monday or later, it can set off a more systemic and lasting response. 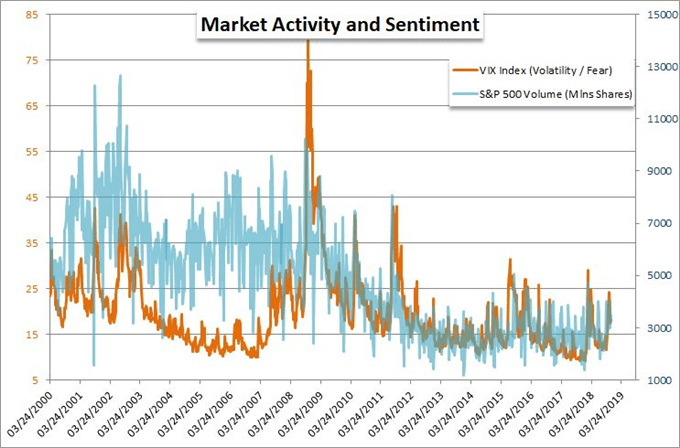 Pound and Euro Risk In the Absence of the Americans

There are a number of high profile themes that will naturally be caught up in the seasonal net, but two high-level concerns to keep close tabs on are the progress on Brexit and existential concerns over the European Union. On the UK's divorce proceedings, Prime Minister Theresa May was in Brussels Wednesday to discuss terms with EC President Jean Claude Juncker. The rhetoric following the meet was positive with promises of ongoing discusses to meet the next critical deadline. That said, this impasse is currently not stationed in the disconnect between the group and exiting member - EU negotiators were reportedly willing to move forward with the draft hashed out with May last week. Instead, the break in progress is from May's own government. With that in mind, the clock continues to countdown and the EU is reportedly due to discuss the strategy in the event of a 'no deal' this weekend. Another crucial update on this front is the Bank of England's financial stability report and stress test results Wednesday which will put numbers to typically abstract concerns. All of this should keep Pound traders on their toes and skeptical of committing to a long-term view on the currency. The Euro's troubles surrounding the unyielding position of its profligate member, Italy, will offer less definition in tracking out each improvement or deterioration. The euro group president this past session offered his support to move forward on excessive debt procedures against the country moves this dispute to the next level. The market is certainly capable of overlooking this otherwise abstract risk; but in the event that risk aversion puts investors on the hunt for threats, this is absolutely a ready-made concern. 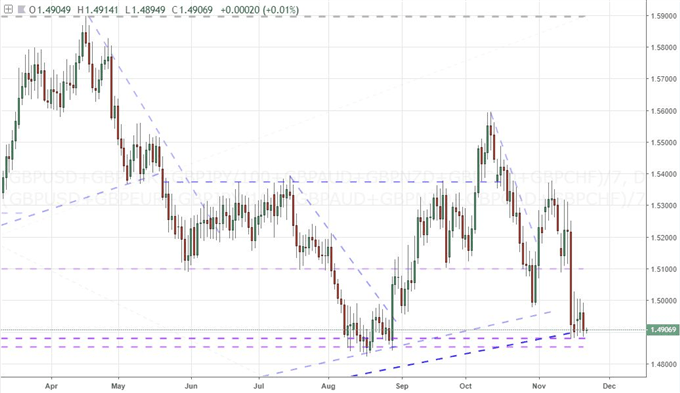 The Current Fundamental and Technical Movers

Though much of our efforts for tracking critical moves ahead should default to next week, there are still opportunities for movement before the week ends. On the fundamental side, an often overlooked event risk with notable pedigree for triggering volatility is the Friday release of Canadian consumer inflation (CPI). This may seem a pretty innocuous indicator, but with the NAFTA negotiation standoff behind us, the focus for the Loonie has turned back to monetary policy. And, the Bank of Canada (BOC) has proven itself remarkably hawkish. If price pressures soften or tense, it can stir a response from the Loonie. If it is a bearish prompt, take a look at USDCAD and CADJPY. Alternatively a bullish outcome would put EURCAD in a good position. From fundamental to technical, crude oil is still in the midst of an incredible tumble. Pauses in the 7-week tumble have not held back the slide - much less reversed it. Jawboning from the President, OPEC, Russia and others is ultimately inevitable; but don't presume that will alter the near-term intent of the market when it comes to a 30 percent slide. We discuss all of this and more in today's Trading Video. 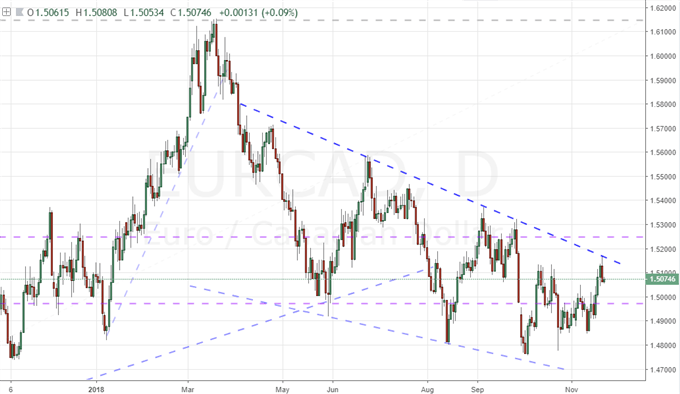