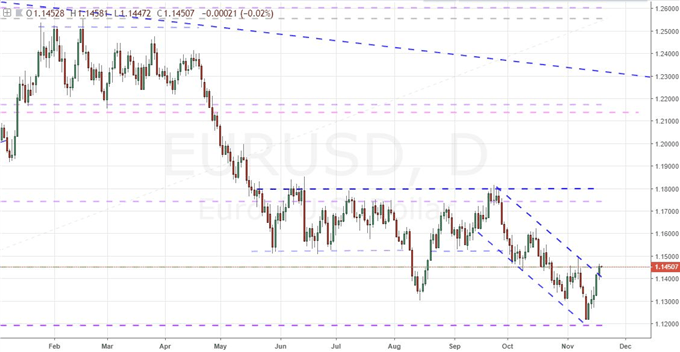 Speculative futures traders are starting to ease back on their extreme Kiwi and Swiss positons, but how is the retail set positioned through NZDUSD, USDCHF and EURCHF? See retail traders positioning on these key pairs, all the FX majors, indices, commodities and more onthe DailyFX sentiment page.

Trading Conditions and the Difficulty in Forging a Critical Technical Charge

There are a host of remarkable technical moves amongst the majors and for some other key risk assets. The question is not the efficacy of the chart patterns that are showing up, but rather the market's capacity to turn noteworthy breaks into more systemic moves. We are in the grips of a week that historically experiences a drain of liquidity associated with the United States' Thanksgiving holiday. While it is uniquely a US market closure, the anticipation and proximity to other holiday periods invariably curbs the belief that enough of a head of steam can build to carry a meaningful trend. One such noteworthy development to start this new week comes from EURUSD. The FX market's crown jewel and arguably one of the most liquid 'assets' in the global financial system, the channel break Monday was difficult to miss. A fifth consecutive advance from 16-month lows carried the pair through the upper boundary of a two-month descending trend channel. All other considerations aside, this would qualify as a meaningful progression to raise the possibility of a more productive reversal. Yet, to ignore market conditions is to defy probabilities - if not reason. Without the backing of targeted and extraordinary fundamental motivation, presuming a viable run is more than presumptuous.

The antithesis to EURUSD in familiarity and association to unresolved fundamental themes, NZDCHF's typically shortcomings may actually amplify its utility in current market conditions. This is not a 'go-to' currency pair for the bulk of the market and few have likely reviewed the chart unprompted for a long time - if at all. However, the disassociation from the mainstream has a lot to do with the lack of high-level fundamental themes that tend to draw more attention than actual market movement. From the New Zealand Dollar's perspective, we find a currency whose position in the top FX echelons is primarily attributed to its high yield and top sovereign credit rating. Its benchmark rate is at a record low and not expected to take a turn for the higher through the foreseeable future. That said, the Kiwi has nevertheless ignored recent risk aversion swings in broader assets and instead climbed through bullish and bearish phases. For the Swiss Franc, the haven appeal hasn't led to any tangible appetite from the FX traders during the swoons we've seen in October and November. What is interesting is that both currencies took a decisive turn this past session against their prevailing trends. Is this trend capitulation and the source of reversal? 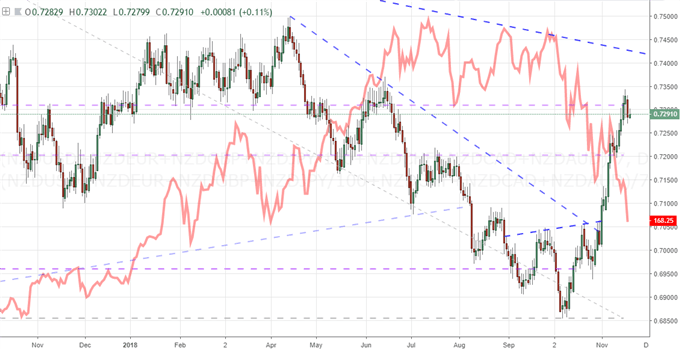 Speculative Positioning and the Path of Least Resistance

The technical views of the Kiwi and Swiss Franc individually are intriguing. Fundamentally, neither currency is facing high profile event risk this week and both currencies' thematic attachment is to wayward monetary policy bearings that has deviated from traditional risk trends - not exactly headline material. That is beneficial as there is no sword hanging over its head that can suddenly change tack with no prompting. What's more, there has been a strong lean in speculative positioning for both. Referencing net speculative futures positioning, each has seen a certain degree of extremeness in exposure which naturally encourages rebalance. It liquidity conditions are prompting a 'path of least resistance' counter trend move - in fundamental, technical and conditional terms - this specific pair sets two currencies with the same nature but on opposite ends of the scale against each other. We focus on this otherwise arcane pair and discuss why its issues can be a boon in our present markets in today's Quick Take Video. 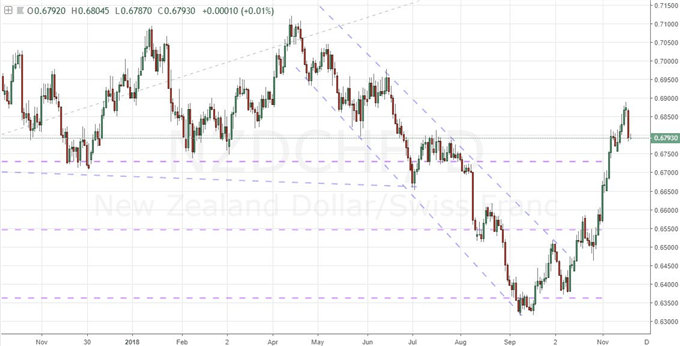