What Will Liquidity This Week Do for S&P 500, Dollar, Oil Trends?

The Overwhelming Importance of Market Depth

We speak often of the importance of sentiment which underlies the entire financial system. Risk trends is a universal medium across region and asset class which is why we eventually come to booms and busts in the global markets. At present, it seems that we are at a systemic crossroads where US indices - the holdout of the speculative spectrum - are wavering and starting to slide to meet a range of counterparts that are already sporting significant discounts of their own. Yet, as the saying goes: an army marches on its stomach. Whether the bulls or bears seek to take control of our bearings, there needs to motivation to coordinate their intent and market depth to ensure there is fuel to the fire. We have already struggled to prompt a clear course setting for the speculative rank thus far despite far-reaching fundamental themes generally taking a turn for the worst. Yet, this equation to facilitate a clear run will grow even more problematic over the coming week with liquidity due to shrink owing to the United States' Thanksgiving holiday. This is certainly not a global event, but the absence of the world's largest financial hub tends to have a disproportionate impact on global markets. There is a clear and robust relationship when it comes to participation and momentum that can be illustrated in a comparison between volatility (such as VIX) and volume (for example from S&P 500). Like seasonality factors, this is not a certainty of restraint ahead; but there are practical considerations to this connection that all traders should consider when they consider their trades. 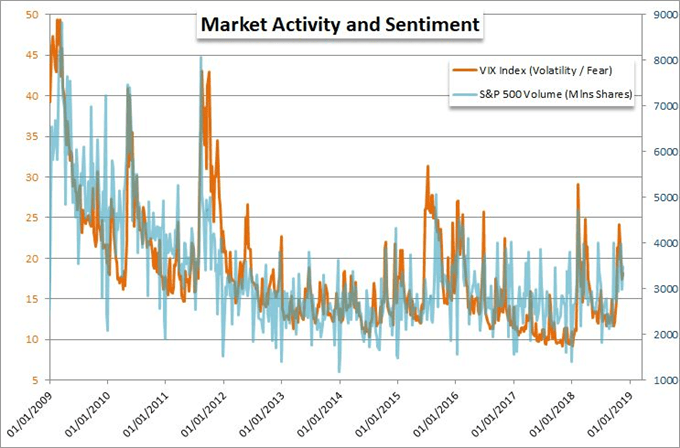 If ever there were a time to suggest 'this time is different' for risk trends overriding seasonal restraints, it would be now. There are a host of critical fundamental themes that could each capsize the market if reasonable provoked; but thus far, they have allowed for balance. One of the most wide-reaching and important - though constantly undervalued - threats moving forward are the trade wars (see our History of Trade Wars infographic). Specifically, the US-China trade front will eventually undermine critical substructure to the global financial system. Once again this past week, the markets were thrown for a loop over this theme and ultimate were left with less confidence in any guidance that may be offered on the progress of these negotiations. Just as he had earlier in the month, President Trump offered up unexpectedly optimistic remarks related to the standoff with China Friday when he said the US would make a deal with China, there were just 4 or 5 'things' on the list and they "may not have to impose further tariffs". That would be a promising update if only White House officials didn't come out afterwards and say not to read into the President's remarks, stating instead that they were still far apart. In other core fundamental news, the IMF's downgraded growth forecasts and systemic warnings continue to haunt the markets with world more tuned into lurking threats. Protectionism and the retreat of fiscal support - from McConnell throwing cold water on infrastructure and the EC blocking Italy's spending program - naturally keep pressure on. And, as the weight mounts, the most vulnerable areas of the financial system like emerging markets and high yield threaten to trigger genuine instability. 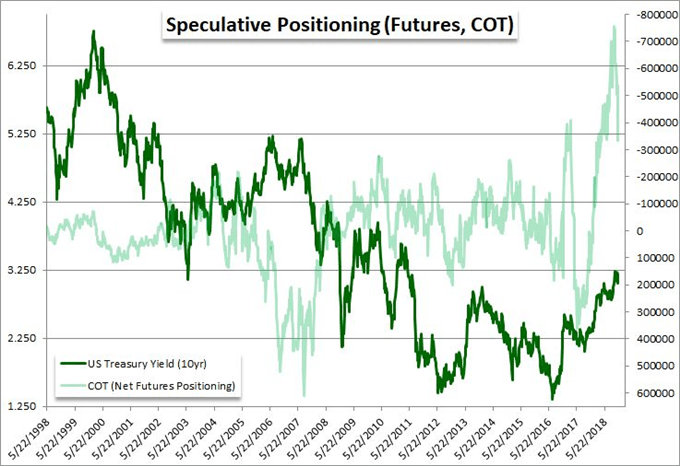 Keeping Tabs on both Italy's Budget Standoff and Brexit Implosion

Of the big-picture themes that traders should be most worried about gaining sudden traction and overcoming the liquidity curb in the week ahead, the twin European crises-in-the-making should be top concern. We have seen many turns for the worst in the meandering path of Brexit. However, this past week was arguably one of the worst. From the trumpeting of a draft deal that both UK and European Community (EC) leadership was willing to sign off on, we saw the situation completely flip when Prime Minister May's government started to crumble with the resignation of key cabinet officials. Now, the order of operations for progress on this already difficult situation is establishing a cabinet that will support a deal, striking the balance that can prompt Parliament approval and then finally getting the check off by the EU. All the while, the clock is counting down as many believe we have already passed the cutoff for settling a deal with time to implement before the March 29 Brexit date. There are few updates scheduled for Brexit next week, but BOE Governor Mark Carney and a few colleagues are due to testify. Italy's budget standoff with the EC is another systemic yet local issue. The current path is clearly one heading towards either further financial ruin for Italy or an existential crisis for the region. Unlike the country's wines, this will not get better with age. There are reports that the EC will issue an excessive debt procedure (EDP) report Wednesday to start the ball rolling on pressure. I would also keep tabs on the ECB's outlook amid these issues in the group's policy meeting minutes and the monthly growth update via the PMI figures.

How Oil Perfectly Encapsulates Our Markets, Dollar a Siren Call

If there were any asset that best reflected the state of the market, it would be crude oil. The commodity dropped nearly 30 percent since early October with a 12 consecutive day decline (a record) through Tuesday which ended with a full-blown capitulation in the form of a 6 percent tumble in the biggest single-day loss in over two years. In 'normal' markets, this aggressive run counter to a popular trend would have drawn in speculative traders in droves to buy an acutely devalued asset. Instead, the three trading days that followed the wash out are little more than consolidation. The dip-buying mentality has faltered lately. Further, this asset has rebuffed traditional fundamental motivations in supply-and-demand to instead draw from risk trends and speculative repositioning. Net speculative positioning behind crude oil futures shows exactly how much fuel there is to burn. As frustrating as this landscape is for traditional trade it should be familiar. Also familiar is the draw of 'imminent' speculative potential. The promise of reversals or key breaks is weaved throughout the global markets, yet the capacity to catalyze such setups is limited by conditions. The Dollar offers its own siren call into the financial rocks. From a 16-month high on the DXY, there has been a notable correction to prompt worries/speculation of a more productive reversal. On EURUSD, it looks like a short-term descending trend channel that is near flipping, but an equally-weighted Dollar index presents much more. We discuss all of this and more in this weekend Trading Video. 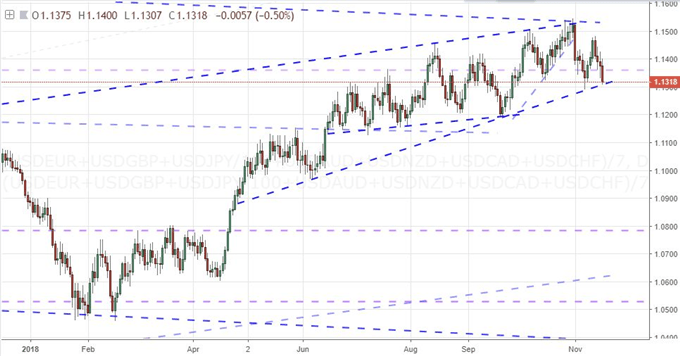