Have trading, market or strategy questions? Bring them to my weekly Q&A scheduled for Tuesday afternoon (New York time). There are many events - from live data coverage to strategy discussions to forecasts - scheduled on the DailyFX Webinar Calendar.

The weekend offered a break from the momentum in a more 'risk aversion' oriented shift in the financial system over the final two trading days of this past week. However, that rest seemed to do little to curb the most recent bout of fear. Now flipping its role of leading risk assets by dragging the rest of the financial system down, the US indices suffered another painful loss to start the week. The region's shares were drenched in red with a significant increase in pressure through the second half of the New York trading session. Ultimately, the S&P 500 gave the best technical impression for the group with slide that would surpass the midpoint of October's massive range and fall back below the 200-day moving average. There is still considerable buffer room in the past weeks' rebound before we see panic set back in for the toppling of the US stock market as a leader, but it is best not to rest our sense of caution - and speculative opportunity - on the backs of this specific asset class that managed to delay is convergence with the rest of the financial system for so many months. The rise in correlation across risk assets is far more relevant, making the proximity of multi-year lows for the likes of the VEU (global equities excluding the US) and EEM (emerging markets) more important for assessing the course of the wider market. Important moving forward is the fundamental motivation the market choses to fix on.

Unlike recent, previous weeks, there are few high profile events on the economic docket that we can point to definitively as carrying an outsized possible influence on global sentiment. No FOMC decision, global trade summit or key country's GDP release. That said, we have plenty of open-ended but abstract financial fodder. Before considering the specific threats, it is important to reflect on the sentiment behind the market when threats previously downplayed owing in part to their ambiguity suddenly become the charge of conviction. It is further indicative of an underlying bias (in this case 'risk aversion') that seeks out the justification for its existence. For headlines this past session, nothing was more ominous than reports that President Trump was looking to bring a Commerce Department draft on European auto tariffs to his trade team. The US and EU agreed some months ago to curb the escalation in a trade war between the two largest developed market economies by agreeing not to pursue new economic taxes on each other so long as they continued to negotiate. That is a loose definition with questionable criteria. Should this multi-sourced rumor prove true, the rise of an outright trade war between these two economic powerhouses will almost ensure a global economic slump. It is also worth mentioning that the US President tweeted Monday that he felt the markets have stumbled recently owing to the outcome of the mid-term elections for fear that the executive branch's agenda would be stymied. There is perhaps some truth to this, but it is more likely hastening an inevitability in a race to the bottom of protectionism.

Measure of Relative Performance of ‘Risk Assets’ Over 12 Months 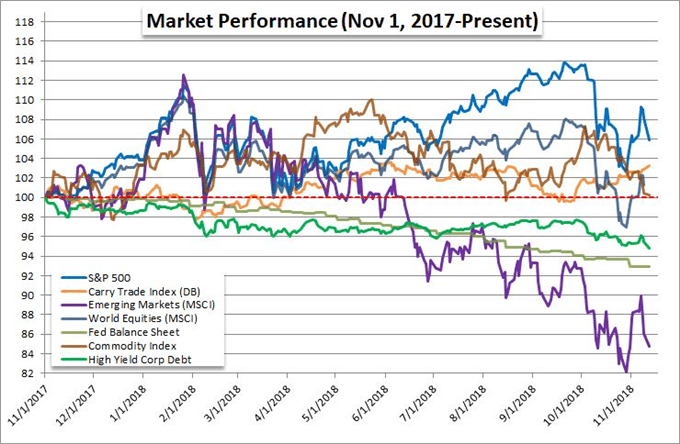 It was easy to be distracted this past session by the developing bearishness in US equities, but that wasn't the only fundamentally-led theme unfolding to open the week. The FX market's benchmark pair, EURUSD, marked important technical progress by breaking a double-bottom 1.1300 support to trade at fresh 16-month lows. This was an impressive move that should be evaluated strategically. The DXY Dollar Index marked its own significant bullish break to equivalent highs, but there is a caveat in the fact that the trade-weighted index is approximately two-thirds represented by that single pair. An equally-weighted Dollar index shows an advance on the day for the currency but far less remarkable progress. Meanwhile, the Euro has taken its own dive with an equally-weighted measure showing the biggest drop in three months and to the lowest overall level in five. What is the motivation for this currency (the FX market's second most liquid) to dive: the troubled relationship between Italy and the Union. The country is expected to present a new budget proposal to its peers after they rejected its first effort last month. There are reports that the Finance Minister is considering a change in growth forecast and automatic triggers to reduce spending should thresholds be met, but that may not be enough. Offer the same contextual leverage, the Pound has helped the Greenback along as Brexit rumors have seemingly multiplied. There were headlines that the Brexit Minister was leading a push against the EU's latest counterproposal while a group of senior cabinet members were pushing for 'no deal'. Ensuring there is even less room to maneuver a viable resolution, Labour has suggested it would approve neither a 'blind deal' nor a 'bad deal'. The Sterling itself dove Monday contributing to an impressive GBPUSD swing in its own right.

Both Oil and Gold Drop, One is a Record and the Other a Discount

To round out the global volatility to start this week, the commodity market was reporting its own remarkable moves. While certain commodity indices were showing a certain degree of restraint at key technical levels, the favorite individual futures were posting meaningful losses on the day. The most remarkable move in the group was from US-based WTI crude oil. The benchmark energy product initially gapped higher to start the week (the first bullish open in approximately two weeks) but proceeded to tumble through the active trading session. The day ended with yet another painful loss for the 11th consecutive loss - the longest series of bearish days on my records. The additional pressure has driven the market to its lowest level since December 2017 in a more-than-23 percent tumble in a month's time. What is driving this move? Certainly not OPEC intent, growth forecasts nor the US President's demands as we have more evidence of these events being overlooked than we do of effective market response. Speculative positioning - such as what we have seen in COT figures - is more the more reliable measure. The similarities gold draws to its energy counterpart are limited to the retreat registered over the past few days. The metal dropped against all the top reserve currencies, so this is not simple a 'Dollar strength' phenomena. This commodity can certainly slip should liquidity be the primary motivator, but its unique benefits should the fiat currency market come under serious scrutiny for the limits of monetary policy and the lack of will of government leadership to collaborate on a global solution to a world-wide financial slump make for an extraordinary hedge. We discuss all of this and more in today's Trading Video.