Are you looking for the top fundamental themes, key technical patterns or just have questions on trading? Sign up for one of the many different live webinars scheduled on the DailyFX Webinar Calendar.

Developing a Seasonal Mood Disorder with So Many False Dawns

There has been a notable lack of enthusiasm in speculative market's attempts to recover the mixture of complacency and appetite that last drove benchmarks to multi-year and even record highs through the opening weeks of year. Sure, there have been various developments that drew in speculative attention and hope, but there has always been something that has ultimately checked genuine enthusiasm. For example, the slow, six-month recovery for US indices was burdened by the fact that most other risk-centered benchmarks were following the exact opposite course setting. When it came time for investors to show their true conviction as the Dow hit a fresh record high in October, speculative appetite buckled instead. There was the same lack of genuine enthusiasm across the markets with the past two weeks' rebound. The disparity in effort was as overt as the distance to meaningful highs and the burden of high-profile, thematic risk. If there was any bullish intent through the opening half of this past week, it was snuffed out by the volatility that followed the US mid-term elections and the FOMC rate decision. Neither event held much potential to redirect global trends nor their subsequent outcome does nothing to compensate. More likely, the move leading up to the event risk and immediately following it was the result of sheer volatility rather than a true fundamental response. If that is the case, we start the coming week without a clear view on course setting. Friday closed with a wide and noteworthy retreat in risk measures. Yet, I consider the S&P 500 a good proxy for the speculative view in the markets. It is trading between its 100-day and 200-day moving averages and close to the middle of its recent range. That reads to me like indecision amid considerable volatility. 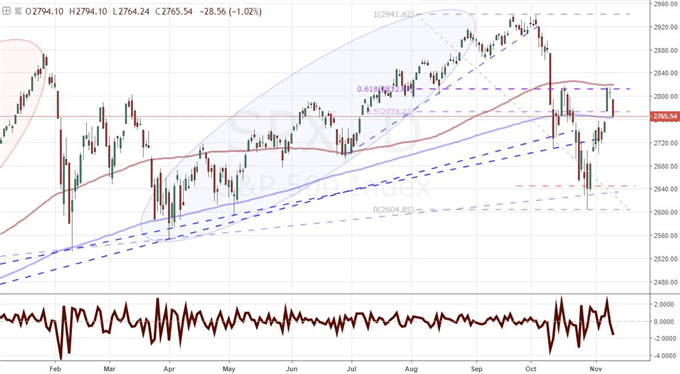 Euro and Pound Retain the Most Overt Themes

Looking into the coming week and beyond, there are a number of high profile fundamental themes that could cause tidal waves in the broader financial system if tipped. However, many are simply too abstract in their connection to speculative positioning or lack for definitive time frames on the way to the next critical milestone. Trade wars, collective concern over monetary policy normalization and global political risks are just such themes. For certain currencies, on the other hand, there are high-level fundamental influences that are likely to generate market movement for their local assets and domestic currency. For the Euro, a steady decline (for an equally-weighted index) has pushed the currency to a tentative bearish break on a long-term wedge. The rise in concern over the Euro-area stability with Italy's budget standoff with their EU counterparts is creating a familiar sense of existential uncertainty that feels much like what Greece generated some eight years ago. On Tuesday, Italy is expected to submit a new budget to Commission leaders that would theoretically come closer to the rules established following the Eurozone sovereign debt crisis of 2009-2012 and the subsequent austerity. Yet, it seems highly unlikely that Italy will compromise. Another theme that continues to exert pressure owing to its mere existence is the Brexit standoff. Following the UK cabinet's impasse on their divorce bill, the Transport Minister resigned Friday to signal that in-fighting is a persistent issue for the country in its bid to find a civil separation. With each week that passes with no breakthrough between the EU and UK on their separation, the risk to the Sterling and UK markets rises. In this context, the Sterling is definitely not accounting or the full weight of a detrimental outcome. 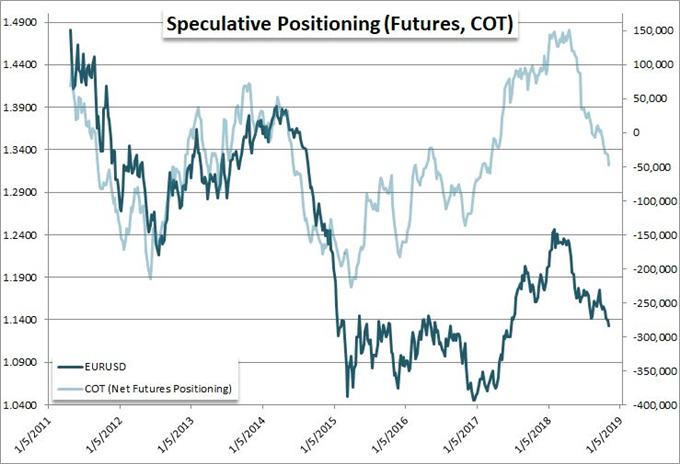 A Dollar That's More of a Counterpart than Catalyst

If the Euro is under pressure owing to Italy's threat, the Sterling is constantly waylaid by Brexit uncertainties and the Yen is defying general risk trends with a carry deviation, where does capital flow. There is a severe hierarchy when it comes to liquidity across the major currencies of the world. The Euro, Pound and Yen are the second, third and fourth most liquid 'majors' according to the Bank of International Settlements' reports. If bearish interest is in control for all three, the significant drop in market depth beyond that threshold to the Aussie, Loonie and larger emerging market currencies offers little capacity to absorb the flight. In this scenario, only the US Dollar can reasonably be expected to offer alternative in the scramble for harbor. This is an appeal in spite of the Greenback's many shortcomings, but it is nonetheless an outlet for some modest strength. That said, the tempo associated with such a motivation will remain somewhat restricted. The Fed is already exerting its full leverage and the safe haven appeal is a banner unfurled over the currency. Alternatively, the Dollar's position in trade wars is a burden, rate expectations truly only have the capacity to disappoint and the potential of a stitch of political risk looms uncomfortably large. This may tabulate into a slow climb for the dollar such that the DXY hits fresh 16-month highs or EURUSD slips below 1.1300, but the rush of follow through is unlikely to turn into a wave. The US docket is light for events and updates on general themes in the week ahead while risk trends are looking uneven. I will eye breakout efforts - and certainly trends - from the USD with a considerable level of skepticism moving forward. 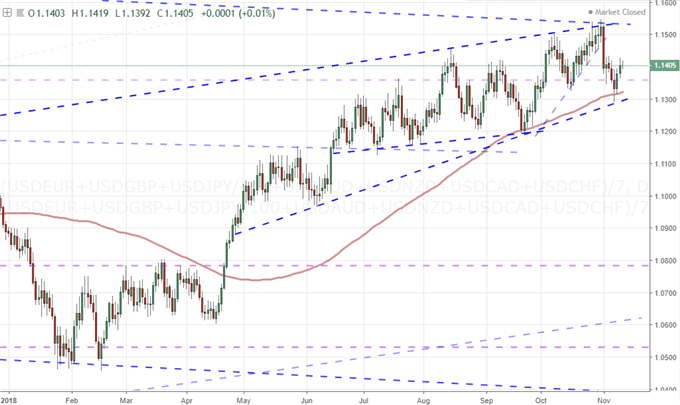 A trend is best served by an overt motivation that can reach the widest possible swath of market participants. Of course, that typically means high-profile fundamental events or themes carry the greatest capacity to concentrate our focus. Yet, sometimes, markets can generate impressive momentum on more elemental factors. Sheer risk appetite is just such a fundamental feature of the system. Typically, I look to the breadth of sentiment via multiple, unrelated assets which find a tangible uniform path. That said, there are instances when speculative conviction falls apart for certain assets without the motivation of a clear catalyst or the confirmation of distant cousins in sentiment. Crude oil is one such unique market mover. Where we have seen some distinct change in tack for a host of risk assets these past weeks, the US-based WTI futures contract has held a relentless path. In fact, oil has dropped 10 consecutive trading days to hit a bearish stride not seen in over 34 years. What's more, the month-long slide has pushed the commodity into a bear market (technical correction from highs of 20 percent or greater). For contrast, the Australian and New Zealand Dollar rebounds are far more nascent. However, they are technically impressive and speak to a rebalance of priorities in fundamental terms. What's more, all three assets have speculative positioning figures in the CFTC's Commitment of Traders (COT) update on futures exposure. Crude's extreme net long position of previous months continues to drop fast which aligns nicely to price and can serve as justification of more selling. In contrast, the net short interest behind the Aussie and Kiwi Dollar futures hit extreme net short bearings which can in turn draw attention to possible stretch in the fundamental interpretation of the currencies. We discuss all of this and more in this weekend Trading Video.

Chart of US Crude Oil and Consecutive Bars (Daily) 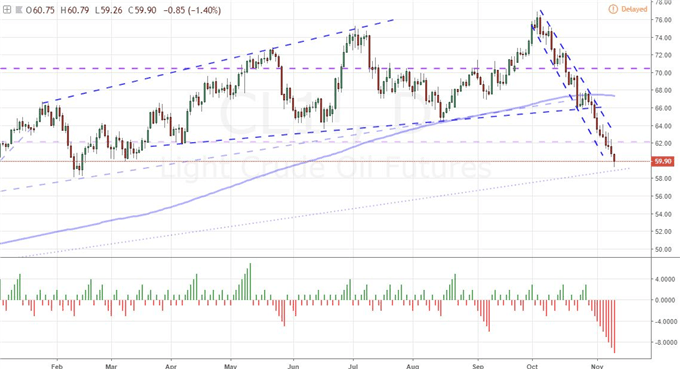