Markets On Edge with Volatility Stoked by the Trade War, Rate Decisions, an Election

Trade War Interest is Revived, First to Soothe and then to Trouble

It has been a while since we have seen the market worry over the course and influence of the US-China trade war. The systemic disruptor for the global economy and financial trade was thrust back into the spotlight through the end of this past week however as US President Donald Trump offered updates. After a call with his Chinese counterpart, Trump helped bolster a market rebound on speculation that the two countries were starting to trace out a path to end the economic standoff. It was reported that the President had told his cabinet to draft a deal to present when Trump and Xi met at the G20 at the end of the month, further promoting confidence that progress was being made. However, the President's enthusiasm was not mirrored by his Chief Economic Advisor Larry Kudlow who said no request for a plan was made and he was less optimistic about reaching a deal than in previous months. And just to ensure the market was left unclear on the issue, the President reiterated his belief of progress after his advisor's remarks. Though ultimately unclear on the course it has set for the market, the theme has ultimately contributed to risk assets' volatility and temporarily pulled USDCNH back from the 7.0000 rate for which observers fear could trigger a new phase of turmoil. This remains a critical theme for the general health of the global economy and the circulation of capital around the world. It also plays a crucial role in the Dollar's position in the financial system. That said, its subsequent influence on the market over the coming week will come without clear dates and will now increasingly draw skepticism and fear. 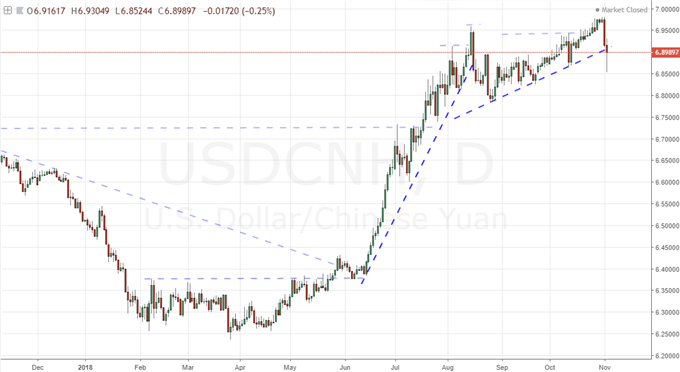 The US Mid-Term Elections are a Concern for the World

A more reliable spark for the markets moving forward - though loaded with more than its fair share of uncertainty - is the US mid-term election. If you want to know how much weight such an event can have on the market, consider the course the US equity indices took following the Presidential election back in November 2016. Of course, this particular cycles does not involve the executive branch, but the political environment has materially degraded since. That is not a statement on the lack of civility in the US government - that does not matter to the markets. Rather it is a reflection on the uncertainty of policy courses that effects economic activity, debt and global trade. Trade wars are a byproduct of sudden and significant change in US policy that has speculative ramifications for local and global markets. Considering the current configuration of a single party dominant executive and legislative branch has generated so much conflict, the possibility of a mixed or Democrat-dominant Congress could make the environment even more unpredictable. The lead up to the event will strike the market with anticipation and uncertainty which will undermine the tentative trend reversals for the Dollar and indices to close this past week. Further, don't expect a clear and binary response from the markets after the polls are tallied. Two years ago, the election of the Presidential candidate who ran on a platform of change spurred an already mature bull trend to its next bullish leg. However, that commitment has brought trade wars and forecasted swell in the countries deficit. With the backdrop decidedly less biased towards speculative reach, it is more likely that scrutiny and skepticism follow any outcome. 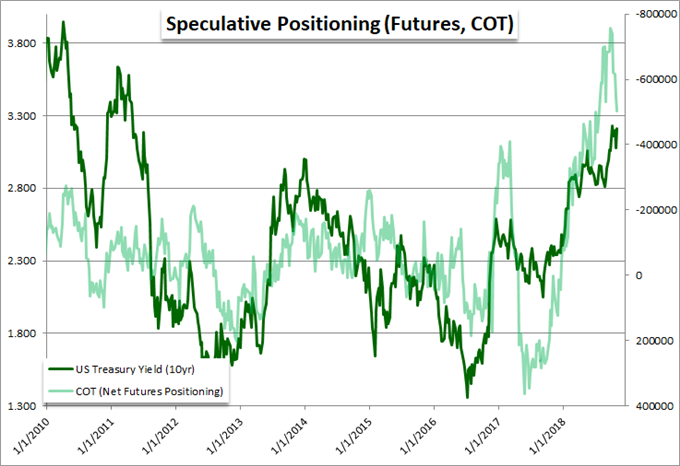 While trade wars and political risks are more pressing fundamental themes at the moment. It is important not to lose site of monetary policy as a critical strut underlying the market's nearly decade-long climb. There are three major rate decisions scheduled over the coming week and each holds the potential to charge their respective currencies. The highest profile central bank meeting is the Federal Open Market Committee's (FOMC) announcement. With an atypical Thursday release, the US policy authority is expected to pause following September's hike lifted the tally of tightening moves from the group to three quarter percent increases this year. This event is still crucial for speculative interest behind the US Dollar however as the market is set on an exceptionally hawkish forecasting path. There is a skew in potential for this event whereby a hawkish lean would be status quo and do little to change the prevailing outlook. Alternatively, should they soften rhetoric to suggest a slower pace of tightening ahead, it would undercut the exceptional fundamental advantage afforded the Greenback. There is a similar - yet mirrored - bias behind the Australian and New Zealand Dollars. Both currencies have seen their previous carry potential collapse through rate hikes and dovish rhetoric these past months and years. Recent temperance towards dovish sentiment will curb response to more of the same, but any hint of a bias towards hikes can leverage a tentative advance from both this past week. In addition to the focused influence of these events on their respective currencies, do not forget the collective role monetary policy has played in driving speculative appetite to their extremes. What happens when the markets believe that accommodation is being pulled; or worse, should confidence in its ability to stabilize the financial system falter? 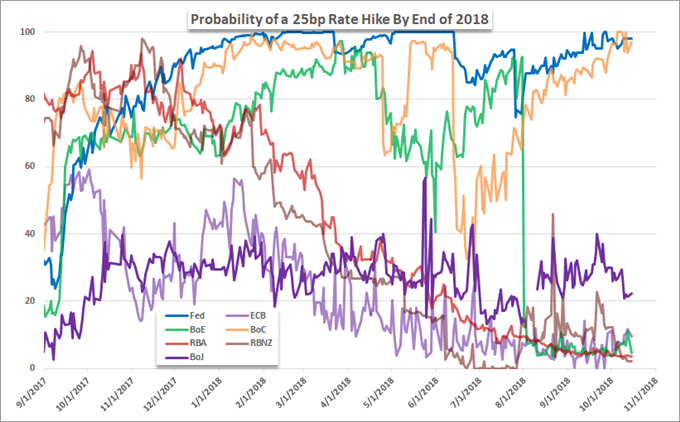 Don't Forget About the Pound, Euro and Crude Oil in All the Excitement

With a host of high profile themes and scheduled event risk to sort through the coming week, it is easy to be preoccupied with wide-reaching themes. That said, we should keep tabs on a few other productive markets where the motivation is perhaps less formulaic. The Pound has experienced an impressive degree of volatility these past weeks owing to a remarkable vacillation in the outlook for the state of the UK's divorce from the European Union (otherwise known as 'Brexit'). Another hint for an imminent solution was crushed this past week, but rumor persists that a deal is imminent. If that is the case, the cabinet meeting Tuesday should offer a definitive signal that agreement is at least in place on the UK's side. Meanwhile, the Euro is still dealing with the open-ended risk from Italy. The country has shown little interest in backing off its commitment to breach European Community debt objectives by increasing its spending. While the are noteworthy event risk on tap - like the Euro-area investor sentiment survey and European Commissions economic forecasts - my focus will be on any updates from Italy. Finally, crude oil should draw more interest from global macro traders. This has not been a risk asset that has exactly conformed to the speculative market baseline trend, but its lack of conviction and trends have stood as a testament to the lack of economic or sentiment trend throughout the market. And yet, the past month has established a remarkably consistent and productive slide that has taken out key range support. There is more to draw from this move than just what the next leg of the crude market may be. We discuss all of this and more in this weekend Trading Video. 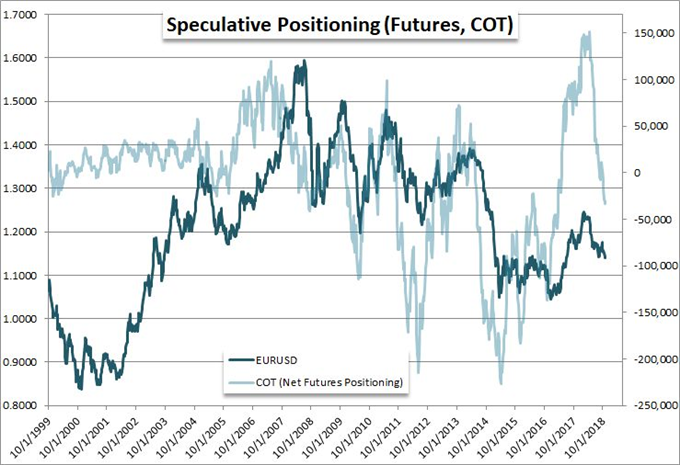