The Market Turns the 'Fear' Dial to 9

It may seem somewhat absurd to suggest that risk aversion only started to genuinely gain a foothold in the global markets this past week, but that may very well be the size of our current situation. I saw it is somewhat ridiculous to only assign concern as of the past week because there have been so many risk-leaning assets that have struggled or have pitched into an outright retreat for months. Whether we look to emerging markets, junk bonds, sovereign assets with a QE-premium, carry trade or even global equities excluding the US (the VEU All-World ex US ETF), we find bearish progress for the better part of the year and for many multi-year lows. If we are talking about the widest swath of the financial system as a signal for the whole's bearing, that would bean indisputable reading. However, speculative appetite can refute such readings as it finds refuge in holdout assets with enough liquidity to harbor the diehard bulls. That was the unique position that US equities seemed to hold alongside very few other assets. So long as the S&P 500 and Dow were pushing record highs, concern over the DAX's or the EEM's struggles would not turn contagious. That said, bulls' favorite "yes, but" source of confidence took a potentially-catastrophic turn for worst this past week. Already on track for one of the worst months in a decade, genuine pain was signaled in the indices this past week. The S&P 500 opened Friday alone with its second largest bearish gap on record. It would also stretch down to a technical 'correction' (a 10 percent retreat from highs) on an intraday basis. Technically, the exaggeratedly obvious trendline support for the benchmark index - mirrored on its Dow and Nasdaq peers - changed from reliable spring board for dip buying to new resistance to project bears. The collapse of a decade-long bull trend is not yet assured, but the market will follow the US equities moves more readily lower than it did higher.

Chart of Comparison in Risk Assets over 12 Months 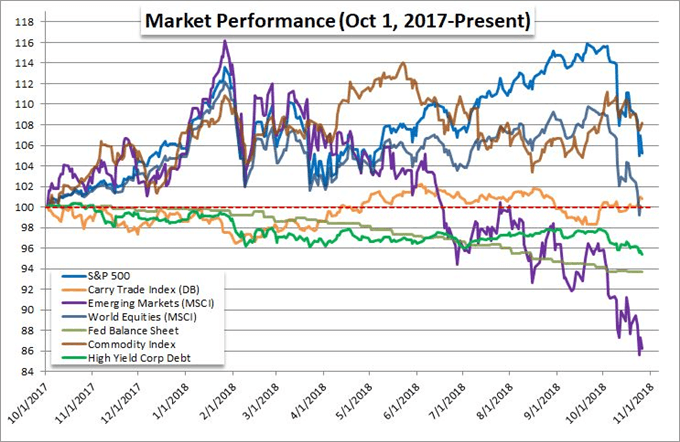 There is already evidence to show the speculators across region and asset class are far less responsive to any-and-all positive news while trouble - both insinuated and overt - drives the bears forward. This may seem a pedantic definition of the obvious, but the underlying bias of the speculative rank trumps the catalysts that more often commands the attention of traders looking for signals for new opportunities or to avoid cascading risk. With a bullish bias, 'good news' extends gains while the 'bad' is discounted or outright ignored. With a bearish setting, the opposite is true. Suddenly, the troubling clouds approaching from the horizon look genuinely daunting. And, the list of storms out on the radar is somewhat overwhelming. Earnings have proven a great example of how bias can shift fundamental event's influence on price, particularly the reaction to to Netflix, Google and Amazon. We are due more important corporate updates - Apple, Facebook, US Steel, GM, etc - in the week ahead. Further, there are some expectations that a slump in corporate buybacks is soon to pass. Should that not earn more buoyancy, it will dash another holdout source of strength. Far more systemic but too often overlooked, the US-China trade war and global monetary policy deserve much closer scrutiny. USDCNH is within reach of the offshore Renminbi's record low in its short history and the supposed 'red line' of 7.0000, and rhetoric for these two countries is showing no sign of improvement while growth and sentiment figures start to sputter. As for monetary policy, there is good reason to believe the world's largest central banks and their expansive stimulus programs have been a key pillar in promoting speculative enthusiasm. If confidence in their ability drops, there is little they can do already so exposed.

A Fluid Fundamental Role for the Dollar Measured by USDJPY

As we look to various event risk and markets to reflect the mood of the financial system, one currency will stand out as a critical measure of conviction and intensity: the Dollar. The Greenback registered a significant advance through the entire week with the DXY putting in for a technically-noteworthy break above 96.15. That particular move disrupted the right shoulder of the five-month long head-and-shoulders pattern the currency had carved out. Fundamentally, this would seem to align with the drop in risk trends - the slide from the S&P 500 and charge for the VIX. Yet, with US indices signaling a continuation of reversal on a massive gap lower this past Friday, the Dollar noticeably broke stride. If risk aversion begins to spiral into outright financial instability, the need for liquidity would leave the currency with few peers. Yet, 'mere' selling pressure can render the Dollar a low-yielding but buoyant carry currency that quickly tips into retreat. Monitoring the currency's correlations to implied yields derived from Fed Funds futures and the VIX can help determine what role it is committing to - and it can also signify the degree of risk aversion. It is this fundamental aspect that will be my principal concern in the week ahead. As for event risk like Friday's 3Q GDP reading or the upcoming PCE deflator, consumer confidence survey and NFPs; the implications will be secondary. To further refine the evaluation, USDJPY is a pair that can render the same conclusion without statistical reference. The Yen is a funding currency which can act like a safe haven, but is fundamentally different. Standard risk aversion sees the pair drop while a systemic panic drives global capital towards key US markets. For the Yen's own fundamentals, the Bank of Japan (BOJ) rate decision on tap for next week should not be overlooked considering the Japanese government (BOJ, Finance Ministry and FSA) held an unscheduled meeting over their concern for the capital market rout that has led to a 15 percent correction in October. 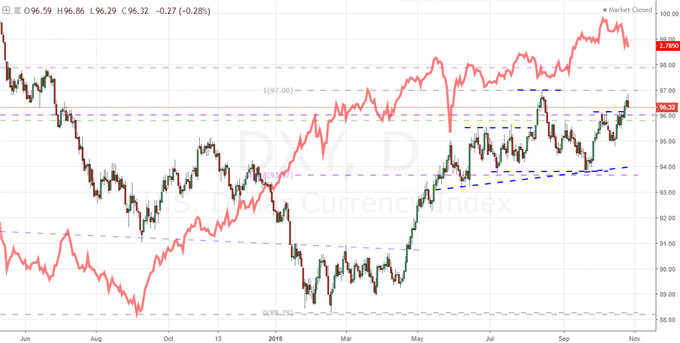 While a systemic move in risk trends will envelop the entire financial system, there are critical fundamental themes that we should monitor for more isolated impact - or perhaps even as catalysts for the tectonic shift. The Euro's focus will be pulled in multiple directions between scheduled event risk and a persistent theme. For the former, we have Euro-area 3Q GDP readings and sentiment surveys among other event risk. It is Italy's face off with the European Union that will pose the most persistent threat however. Headlines referring to both sides contempt for the other's plans will no doubt dot the newswires, but will also have Italian 3Q GDP and the previous month's budget give a known milestone. The same need to distinguish focus will create an uneven terrain for Sterling traders. Progress (or lack thereof) on Brexit will take precedence, but progress has been remarkably uneven. In contrast, the Bank of England (BOE) rate decision will come with an explicit date and time. This particular meeting is the so-called Super Thursday whereby the Quarterly Inflation Report (QIR) and Governor Carney's press conference are due alongside the decision on rates. The BoE is still considered the third most hawkish major central bank, so there is much riding on the outcome. However, the group's propensity for dire forecasts on Brexit can bridge two important themes. Another currency that will be high on my watch list ahead is the Australian Dollar. Though typically a carry currency, the AUD showed little response to the swing lower in risk trends these past weeks. That can suggest a shifting bias for this specific currency, but the Australian 3Q GDP and CPI readings may alter that skew. We discuss all of this and more in this weekend Trading Video. 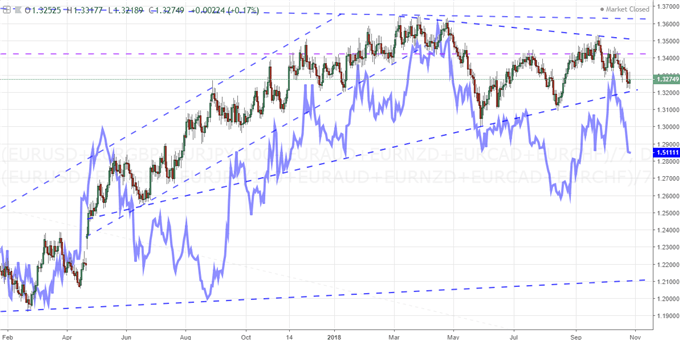