Speculators Grab the Ledge after US Equities Go Over the Edge

The dive from US equity indices on Wednesday still marks the charts like a nasty scar. But there was a tentative sense of healing from these battered pace-setters following a substantial rebound this past session. The question is whether there is enough intent here to stabilize fear and encourage the dip buyers and long-term buy-and-hold crowd to retain control, or if this is a mere gasp before we sink further. Taking stock of the 'correction' Thursday, there is little disputing the impressive scale of the bounce. The S&P 500 and Dow managed between opening gaps and session follow through 1.9 and 1.6 percent rallies respectively. The Nasdaq was by far the most impressive numbers-wise with a 3.3 percent charge. Of course, the implication of these remarkable moves is significantly by the context that they are an effort to recover lost ground. For the Nasdaq, the rebound falls short of fully offsetting its previous day's loss and sets out a clear series of lower highs - though it managed to move back above the multi-year rising trendline support it recently slipped. The Dow and the S&P 500 on the other hand are still below their respective former floors and looking to treat them as new resistance. The same sense of restraint against falling into a bearish black hole was apparent for global indices, emerging markets, carry and other risk-leaning assets. However, for most of them, the potential of swing back in the bulls' favor looks much more like an effort to catch a falling knife or pick a bottom rather than take advantage of a modest retracement. Through the final trading day, keep a closer eye on the technical cues and general course of sentiment. Themes like trade wars, earnings and political risk are present but lacking clear conviction. 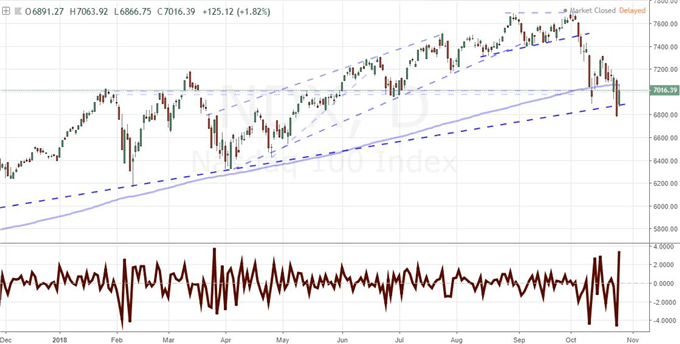 As the capital markets look to sort out trends, the Dollar seems to consistently find its way higher. Well, at least it seems that the Greenback is making progress when we refer to the DXY Index. The weighting on that particular representation is heavily skewed towards EURUSD which itself has slid consistently towards the 1.1300 swing low established in August. Yet, if we were to reference an equally-weighted measure of the USD, the picture changes substantially. It is retesting multi-month highs - whereas the DXY is still short of its own peak - but it is marking far less progress in this recent charge. With the Fed's policy course so clearly set and political risks a constant without a decisive outcome for the next few weeks, the currency's path may borrow from source that seems to wax and wane with the environment: as a liquid counterpart to its its largest and most active peers. With the Euro and Pound both in retreat for their own fundamental reasons and USDJPY convoluted for haven needs, direction is set for the Dollar. Distinct event risk may return to FX traders Dollar radars in the near future however. Ahead, the top listing on the economic docket is the United States' 3Q GDP report. There is a surface level interpretation of this event that will dictate views by either beating, missing or meeting economist expectations. However, the implications of this important reading are far more expansive. How are trade wars and the subsequent increase in the deficit impacting the economy? Have the tax cuts led to the downstream acceleration hoped for? Are the extraordinary readings from sentiment measures earning tangible output? More than just the first 15 minutes of volatility from the Dollar and S&P 500 will ride on this data. 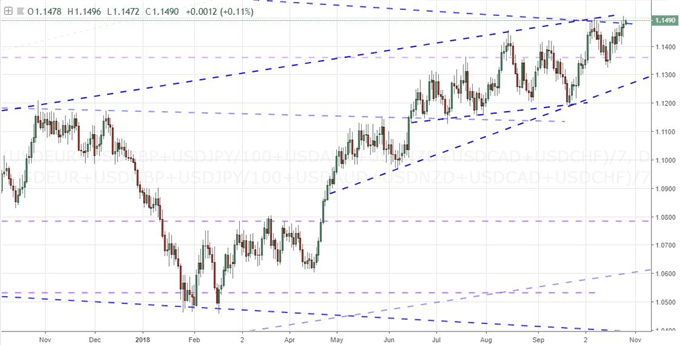 A Steady ECB Course Will Factor Into Euro Later, For Now It is Italy

Where the US Dollar would more accurately be labeled a listing foil, the world's second most liquid currency is clearly running under its own power. The Euro extended its slide both via EURUSD and on a global basis this past session with the European Central Bank (ECB) rate decision as the fundamental backdrop. The group decided to move forward with its cautious pace of normalizing its extreme stance by cutting off stimulus purchases at the end of the year and put in for the first rate hike sometime in the Fall of 2019. This is still a remarkable shift for the ECB itself, but it is less and less impressive among the majors. The BOC hiked rates earlier this week, the BOE is expected to move again soon so long as Brexit doesn't collapse and the Fed is well underway on the hawkish path. What's more the Euro has already priced a considerable premium for its 'soon' status through 2017 and there has been little loss of altitude since then. Another theme that the market is more responsive to for its uncertain course is the standoff between Italy and the EU. This past session, Italy's Finance Minister Tria said there was no question of Italy's participation in the common currency. However, confidence was tempered by Deputy Prime Minister Salvini's remark that they have countermeasures should yields continue to rise and US President Trump took to Twitter to offer a full support of the Italian government's controversial policies (urging yet another global power at odds with the EU to signal its alliance with Italy). The pressure is rising on this country and the threat is poses to Europe's stability. As such, the sovereign credit rating update on the country due from Standard & Poor's should be watched closely - especially after the recent Moody's cut. 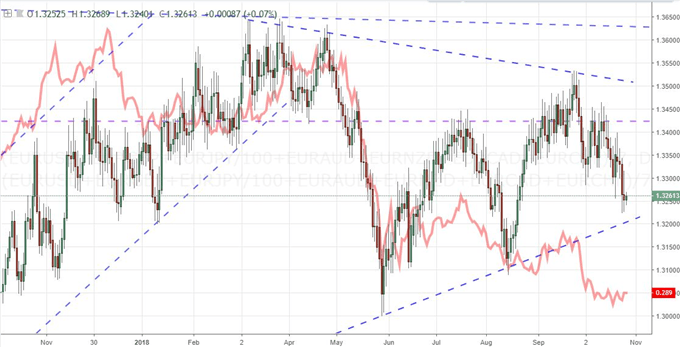 Another major currency that continues to slide is the British Pound. Both GBPUSD and an equally-weighted index extended their slump, but perhaps more significant a reference was the fact that EURGBP advanced. News out of UK was unsurprisingly surrounding Brexit, and just as predictable it took a turn for the worst. Reports that talks between Prime Minister Theresa May and her cabinet had stalled as tempers flared are not exactly surprising. However, the news is still worrying owing to the countdown bearing down on the country and its collective counterpart. Less than a week ago, it seemed that a breakthrough was found when it was reported May was ready to compromise on the border, but that middle ground doesn't seem to be acceptable to some of those in her government. Here too, we are expecting a credit rating update for a country that has a serious fundamental threat swinging over its head. Meanwhile, the Canadian Dollar was prompted to a well-earned advance earlier this week when the Bank of Canada (BOC) hike rates 25 basis point to 1.75 percent - making it the undisputed second most hawkish major central bank. Yet, the speculative value this would add to the currency seems to have been extremely limited. There was more volatility this past session. I am still fundamentally intrigued by the Loonie and not just because of its policy adjustment. The discount behind the currency, the breakthrough on the NAFTA negotiations and stable surveys all hint at a measure of discount. We discuss all of this and more in today's Trading Video. 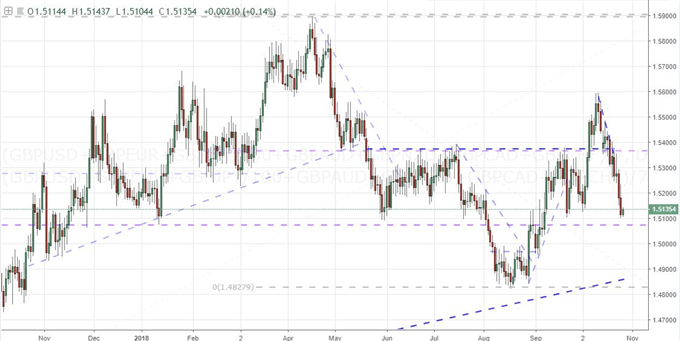