Nasdaq Leads US Markets with Worst Drop in 7 Years, Will ECB Surprise More than BoC?

Are you trading the Euro or European markets? If so, join analyst Nick Cawley as he covers the ECB rate decision live. See what other live webinars are scheduled on the DailyFX Webinar Calendar ranging from event trading to psychology to price action.

If ever there were a shot across the bow as warning to speculative hold outs, this past session's capital market performance certainly qualifies. By the time the US markets were online, there was already a clear sense of 'risk off' permeating the markets. In the Asian session, the Chinese markets were oddly not the pilot of concern for the region. The Australian ASX200 was putting pressure on its own trendline support, but the Japanese Nikkei 225 had already clear its rising floor to shift the immediate speculative advantage. In European markets, the DAX's break through neckline support on a large head-and-shoulders pattern is tough to dispute - even if you can debate intent for follow through - while the French CAC40 and Italian FTSE MIB have sheered through their respective floors. Yet, as advanced as all of these risk aversion moves are, they pale in comparison for intensity for the bout of momentum registered during the US afternoon hours. The S&P 500 and Dow suffered 2.4 and 2.5 percent declines respectively. Those are only the largest daily losses in a few weeks, but they technical progress that they represent is arguably more significant than what we had seen earlier this month. Rather than a retreat from record highs, this past session's tumble pushed us a very overt trendline support that stretches back to the start of this medium-term bull leg back to the US Presidential election. And for the worst showing on the day, the tech-heavy Nasdaq suffered a single day's loss of over 4 percent for the worst hit since August 2011 - a move that would in turn ratchet October's cumulative pain to the worst month's performance (thus far) since October 2008. That is a particularly troubling comparison, and for that reason will no doubt be referenced repeatedly until it bores down into the market's psyche. 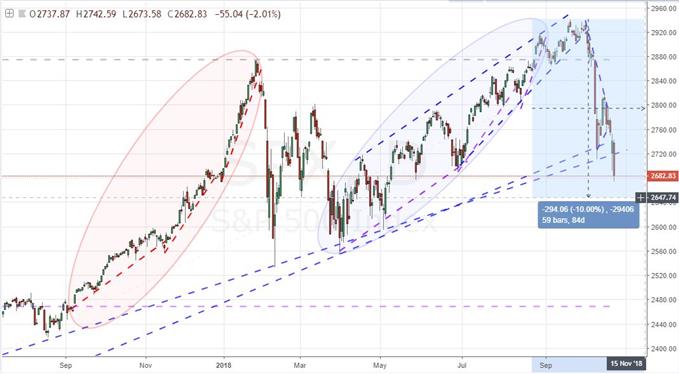 The Fundamental Motivations for Risk Trends an Afterthought?

Severe losses can be troubling and signal for more pain ahead, but that is not necessarily the case. We have seen many false starts for a systemic unwind over the years only to have the prevailing trend regain traction. What would separate our current situation from so many such false dawns before? Motivation is key. In geopolitics this past session, the reports that US President Donald Trump was planning on pulling out of the nuclear agreement made with Russia so many years ago can put a new angle of concern on global threats. Earnings season is easy to extrapolate given its prominence in capital market headlines - though the reports have generally registered as encouraging. Microsoft's report after the bell Wednesday was for example a noteworthy figure. Then there is the ongoing risk that follows the global trade war with many different ways to measure the pressure that is coming specifically from the US-China standoff. Developed world sovereign debt yields (Treasuries) are another headline-friendly spark following the rise to multi-year highs for a collection of the world's most liquid debt instruments, but then doesn't the retreat we've see recently absolve that fear? It all depends on bias. If there is an underlying since of concern, then bad news will send markets lower, ambiguous will be assessed for its detrimental qualities and good news will downgraded in terms of market moving potential. More important are the underlying conditions that we have long reflected on. Both the dependency risk appetite has placed on extreme monetary easing and the rising cost of funding which are being given greater focus as of late should be particularly high in our threat assessment for the future. 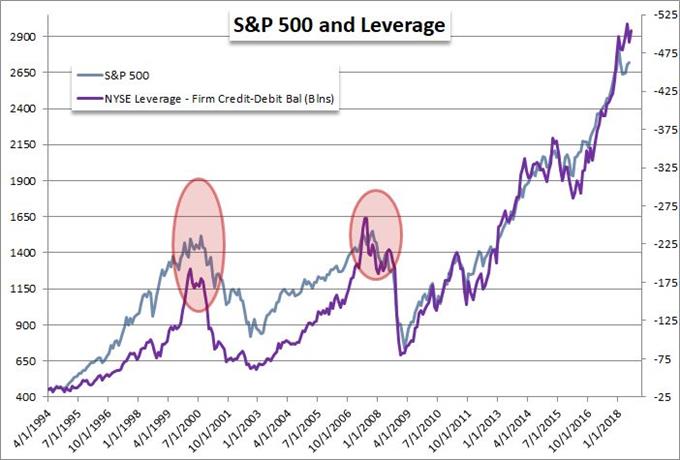 The Dollar Plays the Euro's Foil

A currency with particularly difficult to assess fundamental qualities in these conditions is the US Dollar. Is the benchmark currency exceptionally exposed due to its unique policy of monetary tightening these past years and in turn the pressure President Trump has applied for that approach, or is it a traditional 'have of last resort'? That again depends on the underlying circumstances. The headlines this past sessions made clear that the President is increasing the rhetoric of his critique on the Fed's Chairman, Jerome Powell. There is little doubt that he would prefer a weaker currency, and he in turn believes the Fed is causing the opposite to occur. However, that is not particularly surprising, nor does he have imminent domain on making that happen. In the meantime, a safe haven quality may seem to suit the Dollar's pickup better; but there are problems with that assessment. While the DXY Dollar Index rose this past session to further distort its head-and-shoulders pattern, an equally-weighted Dollar index showed little material movement. The former is heavily weighted towards EURUSD, which indeed saw a significant slide on the day. That is likely owing to the broad retreat in the Euro itself. An equal-weighted index for the second most liquid currency shows a substantial decline on the day. The motivation this past session was the same as the previous two days before it: the march towards a budget cliff between the European Union and Italy. That is unlikely to be resolved in the near future, but a different headline will likely tear our attention away for a brief respite nonetheless. Thursday, the European Central Bank (ECB) is due to announce its decision after its monetary policy meeting. The is very little chance of a hike at this meeting (under 3 percent according to overnight swaps) but there is still a very clear conviction of a move 'down the line'. Out to July 2019, the chance of a hike is less than 23 percent. Yet, by September, the probability jumps above 66 percent. There is still considerable premium for this currency to lose should this distant chance deflate. 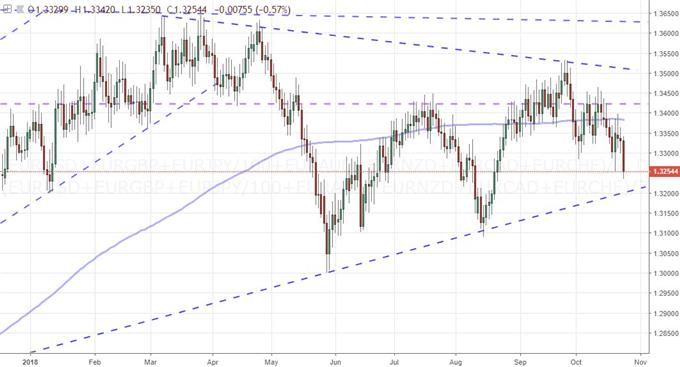 A BOC Rate Hike, Brexit Turmoil and Crude Oil Ending its Run Above the 200-day SMA

Speaking of interest rates, the Bank of Canada (BOC) announced a 25 basis point rate hike - as expected - this past session to raise the key rate to 1.75 percent. There is little debate that the Canadian authority is the second most hawkish major central bank behind the Federal Reserve. This is a unique fundamental advantage for the Canadian Dollar, also known as the Loonie, but it was a generally expected outcome. The 'buy the rumor, sell the news' approach to fundamental event risk was on display with this event as the Loonie rallied after the move but gave back a good portion of the gains. That said, there may very well be more gains for the currency moving forward - perhaps from the likes of EURCAD should the ECB deliver a dovish outcome. In other fundamental themes, the Brexit uncertain has moved from the European Union (EU) versus United Kingdom (UK) to the infighting so familiar in the latter's government. The threat to Prime Minister Theresa May's leadership is palpable and should be considered for any trade opportunities pursued for the Sterling. Finally, as we consider the potential for trendline breaks versus deep tests with no conviction, it is worth evaluating the US-favored WTI crude oil contract. The commodity dropped below its trendline, but more importantly it closed below its 200-day moving average for the first time in 262 trading days. We discuss all of this and more in today's Trading Video. 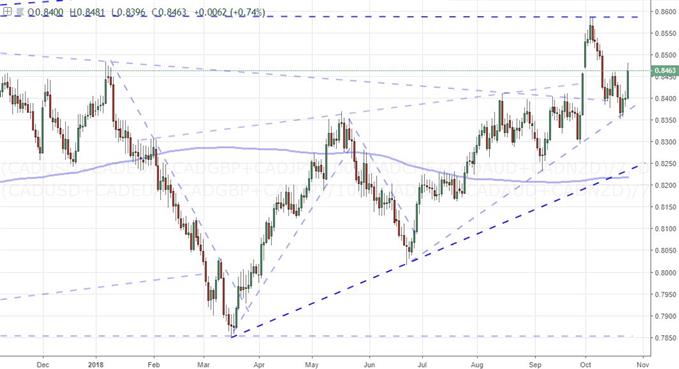