Dip Buyers Return to the S&P 500, Beware the EU Summit and US Government

If speculative appetites are still directing the capital markets' bearings, we would certainly expect traders to seize the opportunity presented by the major US indices this to start the week. The Dow, S&P 500 and Nasdaq had all suffered a painful drawdown this past week in the Wednesday-Thursday tumble, but progress was held up at particularly high-profile levels of support. Though there was a provoking close below 200-day moving averages - technical levels that even fundamental market participants would recognize - the true line in the sand was the trendline support stretching back to the US election and present on all of the aforementioned indices. True to form, if there isn't persistent follow through (which would have triggered a critical bearish break), then speculative appetites would step in to take advantage of the familiar state of complacency. That exact scenario led to the largest single-day rally for the Dow and S&P 500 since March 26th Tuesday, which was in turn the third largest daily advance from these markets since the November 2016 election. In this, we find where the priority is set and motivations derived. These are not 'true believer' markets rooted in systemic fundamental convictions but rather an environment where speculative opportunism is of chief importance. With that in mind, we will see if the strong earnings report from Netflix after the close translates into sustained speculative lift Wednesday. It would be easy enough to facilitate given the NFLX after-hours performance, but scope should not be assumed to be certain. 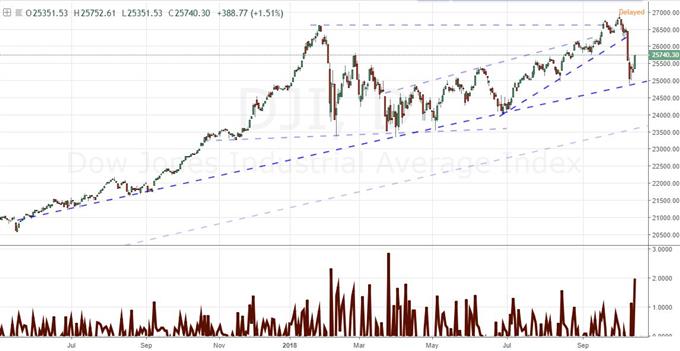 The US President and Treasury Line Up Market Threats

The pressure brought to bear by the United States on the global system will be an important determinant of speculative health moving forward, but there are more immediate victims in its path. The FX market is perhaps not fully appreciating the warnings being issued. From US President Donald Trump, another loaded remark directed at the Federal Reserve was repeated and escalated. Last week, Trump suggested the central bank was 'crazy' for tightening monetary policy too quickly - creating problems for polices directed at maintaining trade wars and increasing the country's debt. Yet, with the market growing concerned the leader of the free world was squaring up for a fight against the world's largest central bank, Chief Economic Advisor Larry Kudlow quickly convened a press conference to pacify any fears that the executive branch would disrupt the policy maker. Well, it is growing more difficult to argue a 'hands off' intent as this past session the President raised the verbal stakes labeling the Fed his 'biggest threat' to the successful execution of his policy. If there is not active intent here, it suggests there will be a line after which he intends to act. Meanwhile, the US Treasury still holds the keys to an important escalation in the US-China trade war. We are still awaiting the release of the semiannual FX report which is being monitored for the decision on whether the US will label China a currency manipulator as it will likely be taken as a cue for justifying the next stage of the economic tensions. Another interesting fundamental weigh-in was offered by a senior Treasury official who suggested a hard Brexit could be a threat to global financial stability. 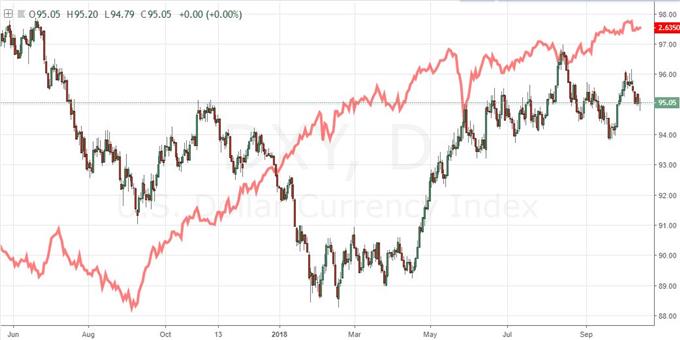 There have been a remarkable number of important economic indicator releases out of Europe recently, but the focus is decidedly somewhere else. For the Euro, the Eurozone trade balance (without seasonal adjustment) dropped to an 11.7 billion euro surplus from a 17.6 billion gap previously, but the real surprise was from the ZEW investor sentiment surveys. The forecast element from the German assessment dropped to -24.7 to more than double expectations while the Euro-wide outlook reading dropped to -19.4 from -72. Employment statistics were the key to Tuesday for the Pound with jobless claims expanding to 18,500 though average wages grew more than expected at 3.1 percent. Certainly important statistics, but they pale in comparison to the forthcoming two-day EU (European Union) summit. The gathering will cover a number of high contentious and exceptionally important themes. One of the key items assumed from the start was making progress on the Brexit negotiations (Join DailyFX Analyst Nick Cawley in a live IG chat on Brexit). The day before the gathering, Prime Minister May received little support from her government heading into the negotiations while Donald Tusk remarked that there was little reason for optimism heading into the meeting. Whether there is explicit progress or not, this is set to be a market-moving event. Another top matter to address at the leaders’ summit is how to address Italy. The Eurozone's third largest economy has made clear its intention to bolster economic spending in conflict of the EU's deficit targets. Italian Prime Minister Conte made clear that he is 'extremely happy' with their budget plans which suggests a certain standoff between collective and member. Expect tense anticipation and potentially-heavy volatility for the Pound and Euro ahead. 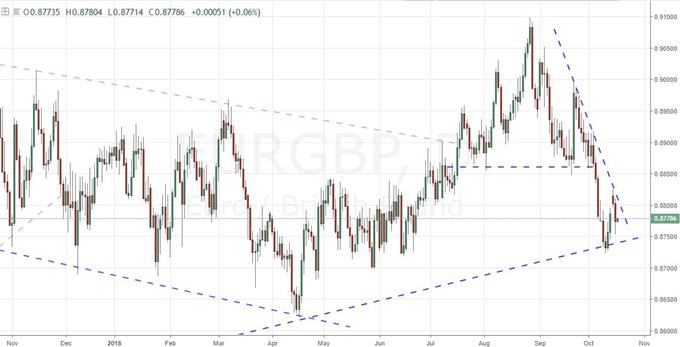 Gold as a Magnet to Fundamental Noise While Kiwi, Aussie and Franc Raise Above It

It is clear that the fundamental challenges facing the most liquid currencies are growing. The Dollar is starting to draw the attention of a President that prefers whatever trade advantage that can before. The Euro is facing another systemic risk while the threat of a Brexit crash out grows in prominence for the Sterling. And, as for the Japanese Yen, near-permanent dis-inflation and distortions from a desperate Bank of Japan (BOJ) make it a poor, last option. Should the screws turn and capital flee these currencies for their individual and collective issues, there will be few places for capital to flow that represents the liquidity and stability - not to mention cash equivalency - that they will be seeking. One of the few places to find it will be in gold, as was seen back in 2008-2011 is gold. Don't dive in now, but consider its capacity as a hedge or outright trading opportunity should the circumstances fall into place. Meanwhile, the other major currencies may not represent ideal alternatives to the much more liquid counterparts; but they can present skewed opportunities of their own. The Australian and New Zealand Dollar have slowly advanced with RBA minutes and 3Q CPI supporting their respective, distant rate prospects while risk influence has distorted severely. I am also keeping a close tab on the Canadian Dollar as we await motivation for the Bank of Canada (BOC) via the consumer inflation statistics on Friday and the Swiss Franc which is sinking under its own weight without data provocation. We discuss all of this and more in today's Trading Video. 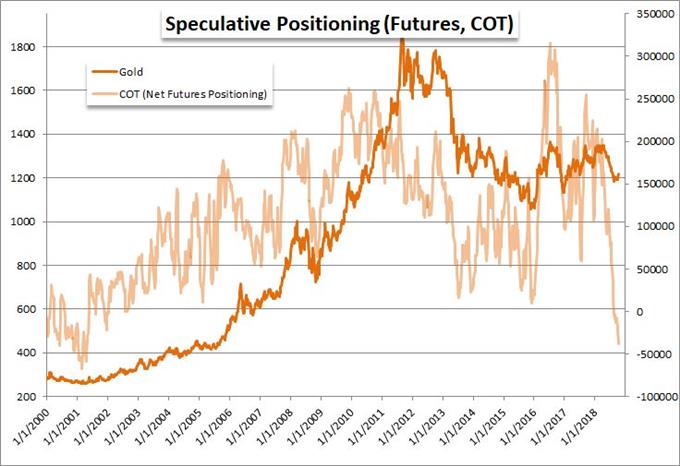