Dollar, Euro and Pound Trading Over the Coming Days is Going to Be Fraught

Like a life raft encircled by sharks, the risk-leaning benchmarks opened this week with an air of stability while the fundamental threats to the system remain distinctly unresolved. Following last week's painful collapse in US indices - a move that motivated risk aversion far and wide - Monday's steadfast conditions were welcomed by harried bulls. The balance was not simply isolated to US equities. European and Asian shares markets registered small movements, the emerging markets offered a measured gap lower without hitting new lows and the Yen-based carry trade eased up on its retreat. Yet, despite the implications such a correlation across diverse markets represents, there is more loaded speculative potential packed into the next move from the S&P 500, Dow and Nasdaq. These indices are still running a considerable premium to nearly every other high-profile 'risk' metric even after the deeper rout. The technical picture accurately reflects the circumstances moving forward. All three are hovering just above major trendline support which could readily signal a medium-term reversal in trend if cleared - in concert, the move would get on far more radars. Far more important is the sheer number of possible catalysts that can tip us back into selling pressure - or cue a notable rebound. Anticipation of the US Treasury's call on Chinese polices keeps trade wars in focus (see the history of a century of trade wars here). Yields are at the mercy of risk trends and US Treasury yields specifically at the command of China. Growth forecasts were downgraded this past week for an otherwise 'mundane' threat. Earnings season hits its first 'FAANG' update (Netflix) Tuesday after the bell. Then there are the regional threats, which we discus below. 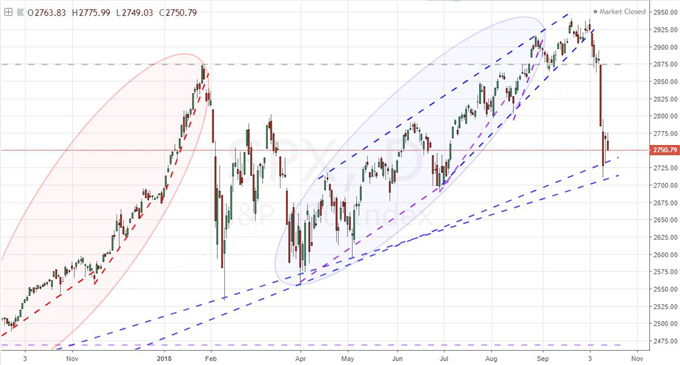 When trading FX, it is difficult to avoid the US Dollar. However, given the state of its fundamental predicament, that may be an effort worth making. Whether we reference the trade-weighted DXY Dollar Index or an equally-weighted measure, there is a distinct lack of bearing on the benchmark. The picture is appropriately reflect via EURUSD, the most liquid currency bar none. There is a multi-year head-and-shoulders pattern that the pair tentative broke in August only to reverse course before conviction could take. What eventually resulted was an inverse variation of the same pattern where the break above 1.1725 again fell apart. Now trading around 1.1600, the Greenback has shown little intent to champion either bullish or bearish interests for the time being. That is not likely due to a lack of meaningful fundamental charge but instead it is more likely a side effect of an overabundance of meaningful themes tugging at the currency. For risk trends, there is not enough intensity to raise the focus on the currency's safe haven status, but even its carry position has yet to be provoked this week. One fundamental signal that was prodded this past session but still abstract for most is the currency's position as the unquestioned reserve leader. This United States deficit for 2018 was projected to $779 billion which equates to a 3.9 percent ratio to GDP. That is the largest dip into lending for the government since 2012 and furthers the concern that the country pushing the financing tolerance of the ratings agencies. Until we see one of these key themes take command of the currency's bearings, it will prove difficult to trace its course. 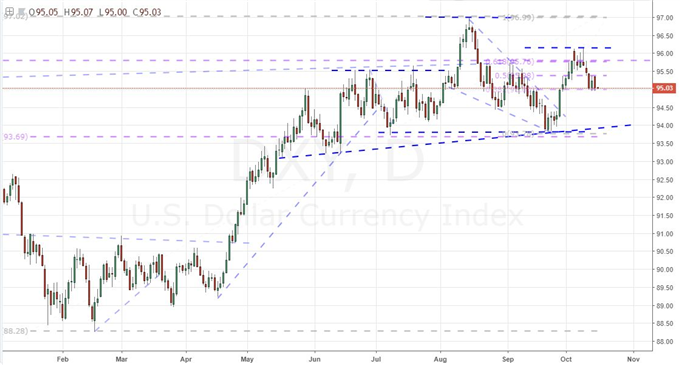 As the Dollar flounders fundamentally, its largest counterparts are honing in on very specific fundamental themes. Yet, where there performance is riding on a single track, the outcome and timing of these uncertainties are problematically open-ended. Form the Euro, we were reminded that the currency's future is under pressure. Following the growing discord between the Italian government and their EU/Eurozone counterparts this past weeks, the Italian Deputy Prime Minister Salvini remarked that the country doesn't feel bound by the EU's deficit rules - making a finer point to previous remarks that the country could increase spending if they don't meet a generous GDP forecast and their belief that the European Central Bank (ECB) would bail them out should financial conditions grow strained. Prime Minister Conte's remarks today and the two-day EU Summit Wednesday and Thursday will prove crucial. These particular events will very likely be more market critical than the Eurozone and Italian trade reports or the region's investor sentiment survey from ZEW. The British Pound will also have a lot invested in the two-day meeting of the European leaders. This is a crucial 'crunch' event for the UK and EU to hash out a clear path for the divorce known as 'Brexit' (learn about the different possible Brexit outcomes in this special report). If this summit ends without resolution, the Pound is likely to tumble. Just as readily, a positive outcome will trigger a rally. Yet, after the collapse of talks between chief negotiators over the weekend and Prime Minister May's remarks in Parliament Monday, the Cabinet meeting ahead will more likely set this event for a crash landing. 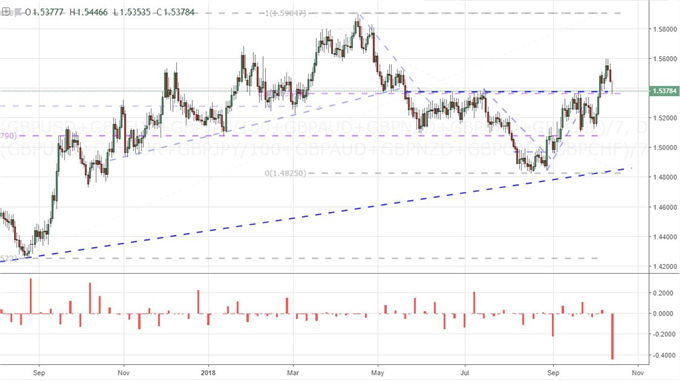 As convoluted as the backdrop seems for the likes of the Dollar, Euro and Pound; there are still options for the studious FX traders. The Canadian Dollar was given a serious charge this past session when the third quarter business sale survey from the Bank of Canada (BoC) showed an significant improvement. The general sentiment figure and lending survey were decidedly less encouraging, but these were reading taken before the breakthrough on the stalled NAFTA negotiations. Now the focus for the Loonie will more likely fall to BoC intent, so the next major update comes from Friday's inflation update. Meanwhile, the New Zealand Dollar was prompted to a rally of its own with the release of the third quarter CPI (consumer price index) update. The 1.9 percent clip is still a ways from the upper threshold on the Reserve Bank of New Zealand's (RBNZ) tolerance band for price pressures, but it nevertheless makes the next move decidedly more hawkish rather than dovish. Given the deep discount on the Kiwi these past months and the lack of response from the currency to last week's risk flush, there is naturally more response to the positive news. I would expect the same for the Australian Dollar moving forward, but there the key event risk comes with the local employment report and third quarter business sentiment survey which will hit the wires at the same time. We discuss all of this and more in today's Trading Video. 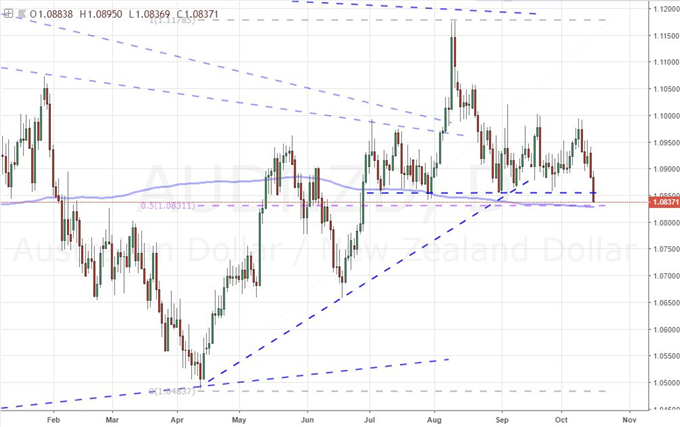