Risk Aversion Persists and the Threat of Trend Grows

We have closed out a second day of unmistakable risk aversion for the broader financial markets. In the progression of reversing course from a decade-long bull trend, we have checked off yet another box. With fundamental measures of value long ago deteriorating underneath high-flying asset prices, the real speculative traction began some months ago when we started to register a divergence in the performance of the seemingly unflappable US equity indices and many other speculative assets (global equities, emerging market assets, junk bonds, carry trade, etc.) that were starting to take on water. When the S&P 500 and its peers started to sink these past few week, it would raise concern over a contagion that set the stage for concerted selling. That is what we are currently registering. While the S&P 500, Dow and Nasdaq 100 losses this past session were not as intense as Wednesday' 3-4 percent tumble, they were nevertheless an unwelcome consistency of pain. The S&P 500 has slid below its 200-day moving average for the first time in months (only the second time since June 2016) and now all three stand at the cusp of overturning the leg of the long bull run that found traction after the US election. It is worth noting the disparity in performance between the likes of the S&P 500 and tech-heavy Nasdaq. The latter is a more concentrated representative of the top performing tech sector, yet was holding up relatively well - though it is already on pace for its worst month since the height of the 2008 Great Financial Crisis. In the contrast between US indices and other risk assets, it is tempting to find comfort in the more reserved losses. However, the months of losses preceding this bout of intensity means they have less premium to shed quickly. It should not be relied upon as a signal that risk trends are going to imminently stick a landing. 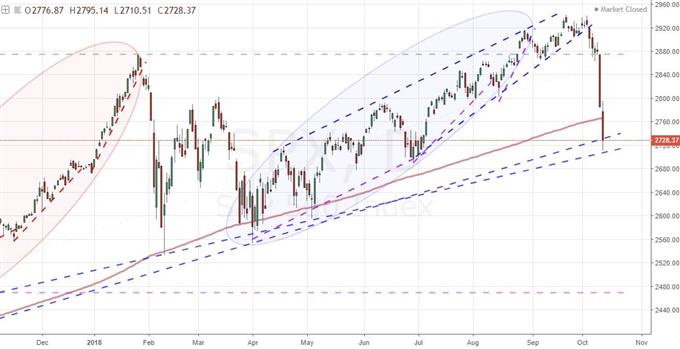 As the intensity of risk aversion picks up, one of the more unusual performances for those that keep a tab on the global markets comes from the US Dollar. Considered the indisputable haven currency and the foundation of the 'cash is king' saying, we would expect it to climb - and sharply - if fear was driving investors to find safe harbor for their capital. In the medium to long-term, I believe this status will come under greater pressure as the world diversifies away from the political and financial influence of the United States; but in the interim, the Greenback still occupies the role of the beacon for flight to quality. However, intensity matters. It is true that the severity of US shares' retreat is remarkable, but not so much as to drive all investors to US Treasuries with little thought to cost control in making the journey. There is certainly an appetite to reduce risky exposure, but that is likely to see the currency remain under pressure so long as fear doesn't hit critical mass. Since late 2014, we have seen the Dollar bid as a carry currency in anticipation of the Fed's promised move to normalize monetary policy. Considering the tepid returns earned through a slow climb from a near zero rate offered little reward for the risk, the follow through as the central bank continued its course of hikes was restrained and volatile. Yet, the premium is still there for those that held on to the currency for a small interest rate differential. This is similar reasoning as to why the Yen crosses have not been more active in the market flush as there was little yield to pursue via this funding currency aside from USDJPY. So, a bid for the JPY has been just as tepid. Ahead, the Dollar will continue to weigh its status in the market, but there will be other themes to keep track of as well. President Trump's critique of the Fed continues, but that will likely change little. That said, the falter from the market will certainly throttle rate forecasts. The University of Michigan Consumer Confidence survey is due Friday and 3Q earning season starts. However, I am most concerned about Moody's sovereign credit rating review of the United States after the New York close. 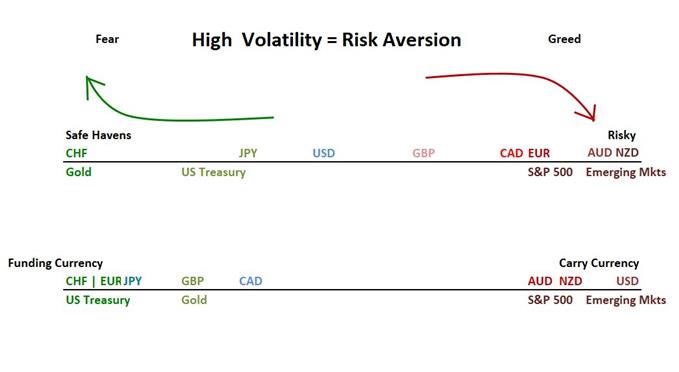 Euro and Pound Still Hone Into Their Own, Unique Risks

If the Dollar is under pressure, there are only so many places the liquidity will squirt. Considering the single currency accounts for nearly two-thirds of the turnover in the market, retreat from the Dollar can translate into substantial capital inflows for its counterparts. The Euro is first in line as a benefactor - everything else being equal. The second most liquid currency in the market would indeed find a measured advance which showed through clearly via EURUSD. If the Dollar is due to continue its retreat, I like the pair for this liquidity relationship and the technical recognition that its move back into range is the path of least resistance. That said, this currency is not one of genuine fundamental appeal; and it could quickly find itself on the chopping block and override the the Greenback's own issues. Italy is posing a greater and greater threat to the Eurozone, and that will only intensify as global financial and economic pressures increase. In response to the Deputy Premier's remarks recently that the country believes the European Central Bank (ECB) will be a backstop for any unforeseen Italian troubles, sources quoted from Reuters this past session that the group would only act only in the event that the country secured a bailout from the EU. Next week's EU Summit seems that it will cover more than just the Brexit. Speaking of which, the Pound wavered this past session following Wednesday's run. EU chief Brexit negotiator Barnier's optimistic remarks are still hanging in the air as are the questions on the UK's position, but there was a distraction this past session. The Bank of England's (BoE) credit conditions survey showed expectations for the biggest cut in mortgage growth since 2008. 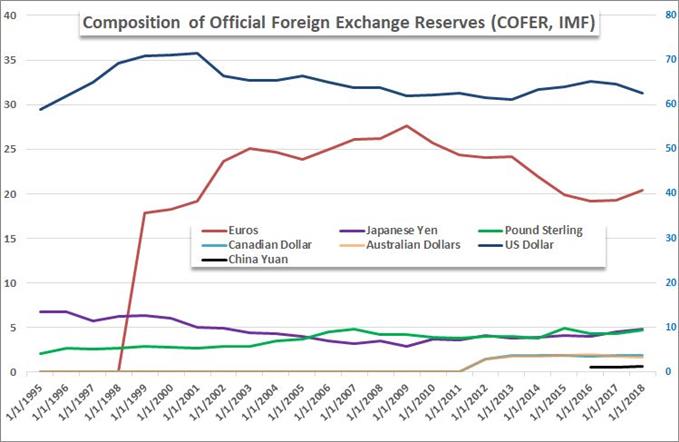 In the context of the global reach behind this swell of risk aversion and the FX market's unexpected displacement in the spectrum, the typical haven/carry currencies (Yen and Dollar) weren't the only ones unexpectedly off course. On the other side of the scale, the traditional high-yield carry currencies were running in direct contrast to their expected alignment. The Australian and New Zealand Dollars have historically followed sentiment closely - for both better and worse. And yet, equally-weighted measures of both currencies jumped higher off of multi-month lows Thursday as equities tumbled. Have these currencies suddenly flipped roles to safe havens? Most certainly not. Rather, these currencies still fit the profile of a lower liquidity and relatively higher return counterpart to the 'core majors', but their appeal for FX traders had long ago deflated with their own interest rates at record lows and speculative appetites seeking capital gains rather than tepid yields. Perhaps both the Aussie and Kiwi have shed so much carry interest that they are at a discount even for risk aversion. That may be true at lower levels of fear, but full-tilt panic will lead even committed funds in the country escape. Meanwhile, the commodity market seems to be following more of the basic risk line rather than the supply-demand balance. The WTI crude oil contract has extended its hearty slide to return to the midpoint of its 2011-2016 bear wave. UK-preferred Brent drop back to its important former range resistance at 80 and is testing it for support. Of the major commodities, there was no more interesting development than gold's 2.5 percent rally. It was both the biggest charge higher since the June 2016 Brexit reaction and a technical cue for clearing two months of congestion. We discuss all of this and more in today's Trading Video. 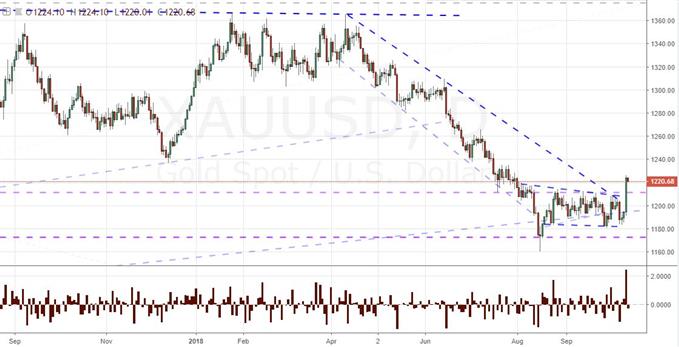