Last week closed with a definitive measure of risk aversion registered across the global financial system. The measure of fear was not in intensity but rather consistency - a correlation of lost ground for a wide range of risk-oriented markets. With even the US equity indices under pressure, it was clear that the most regimented hold outs for complacency were starting to lose their grip. The start of the new trading week demanded a quick return to evaluating sentiment across the system. Asian markets opened to the pent up pain of the preceding week as China's market closure finally found outlet to account for the accumulated pain - registering the largest single-day decline for the CSI300 in nearly a decade, and the Nikkei 225 and Australia's ASX200 suffering significant losses of their own. European experienced an even more broad and intense bearish pressure. From the German DAX to UK FTSE 100 to French CAC 40, the declines were significant. That momentum however flagged by the US afternoon session with the S&P 500 and Dow recovering to positive territory after deep morning losses. Perhaps the absence of bond market liquidity follow last week's Treasury-led global rally in sovereign rates was a salve for speculative interests. The big picture and long-term implications of monetary policy removing cheap funding and explicit support for rampant risk exposure is starting to seep in. If it becomes a mainstream concern, it will be difficult to revert to complacency.

China and Italy Stand Out as Specific, Regional Fundamental Threats

With the pause in the benchmark 10-year US Treasury yield's advance to multi-year highs easing some of the pressure on global rates, investors were freed to cast their focus elsewhere. There was rather little breaking news that would support rampant speculative appetite but considerable targeted threats to more regional stability threats. Though China's stock market tumble was remarkable on the day, it is arguably less threatening than the move from the Yuan or headlines popping up in the financial press. While seemingly a reserved move, USDCNH's advance Monday is more ominous fundamentally than some may realize. The People's Bank of China (PBoC) took action in August to supposedly 'reduce volatility' in the Yuan, when they more likely did so to cool fears of foreign capital flight from the country and ease the pressure from the United States' ever-escalating trade war. Either the Yuan's further backslide was allowed on purpose or authorities are slowly losing traction. I don't know what would be more troubling. Meanwhile, the Italian-EU standoff is starting to crack the calm of those that carried over optimism from the Greece affair. Any optimism from Moscovici's remarks after speaking to 5-Star representatives was lost when Italian EU Affairs Minister Savona reiterated the country's plans to increase public spending if GDP didn't hit targets and laid the role of backstop at the ECB's feet. 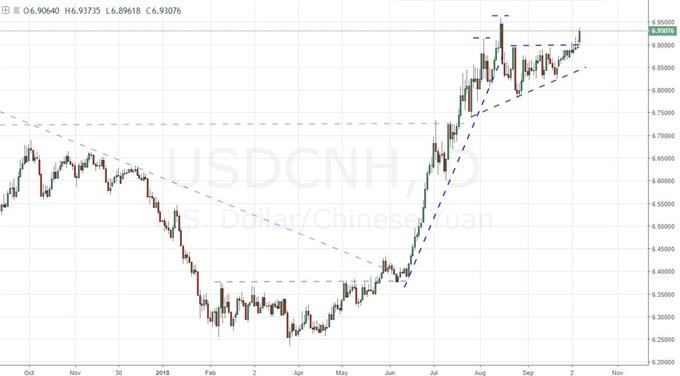 So far this week, we have seen market developments founded on themes. These undercurrents will continue to tow the markets when the tides of speculative interest shift back towards the influence and fallout of these areas. Yet, in the meantime, we need to also keep close watch on the scheduled - if limited capacity - event risk on the docket. Over the next 24 hours, we will have the return of full bond market liquidity (most notably US Treasuries) which can stir the deeper risk trends and monetary policy conflicts, but the US Dollar and capital markets will also have discrete listings to absorb. The NFIB Small Business survey is an important complement to Friday's University of Michigan Consumer Confidence update as the front line for confidence in the US economy. In contrast to investor and economist assessments, these measures are slower to register complex upstream troubles such as fallout from trade wars or the financial impact of growing deficits. It is that latter interest that should keep Friday's update on the United States sovereign credit rating from Moody's on our radars. For the time being, the most influential event risk for the broader market over the next 24 hours is the update from the IMF on global growth forecasts (WEO). The global financial stability report (GFSR) and fiscal monitor should cross the wires over the coming days as well.

Potential Worth the Patience on Pound, Loonie, Swiss Franc and Gold

With all these high profile themes and laden event risk, it is easy to get lost specifically in the opportunities for the Dollar, Euro or Yen - whether in global risk trends or their specific participation in the complex web these issues tug on. Yet, as we have seen happen so often as of late, the presence of singular and overpowering fundamental issues can just as readily scuttle intended moves as prompt them. Looking elsewhere to perhaps lessen the complexity is a worthy endeavor. From the Pound, the charge this past week to overtake the midpoint of the April to August tumble (on an equally-weighted basis) has stalled to start the week. Brexit relief is not Brexit optimism. Range in theme will align to range in price so long as more serious headway isn't forged. For the Canadian Dollar (Loonie), the post NAFTA resolution relief rally from last week has lost its lift. How much of this recovery is speculative momentum versus accurate reflection of prevailing value? We will see that determined alongside appealing technicals. From the Swiss franc, the fundamental anchor is far less certain, leaving the currency more leeway for motivated counterparts and determined technicals. I am also keeping a very close eye on Gold. The metal's dive to start the week has covered the entire range of the past weeks. It could slip support, but the yields implication carries a far more decisive influence for this commodity. We discuss all of this and more in today's Trading Video. 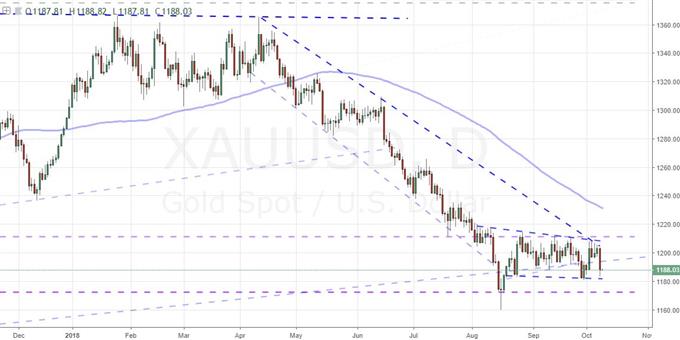