A Mere Pause or True Reversal for EURUSD and S&P 500 Next Week?

Fear Has a Foothold but Not a Purpose

This past week closed with a notable retreat in 'risk' assets. The most notable performance was made by the S&P 500. US indices represent one of my favorite measures of sentiment among the major capital market representatives, but not because of their extreme sensitivity to the mood of the speculative rank. Instead, these specific equity aggregates have been notoriously biased, ignoring tentative risk aversion but freely indulging in any and all bouts of further reach. As for the preference of the SPX rather than the Dow or Nasdaq, it is by far the most heavily traded measure via derivatives like the emini futures and SPY ETF. It is this unique position that makes its tumble so noteworthy. The technical break after weeks of congestion was decisive and intense - the biggest two-day drop in four months. And yet, it is still far from a deep cut to extreme complacency. What is far more meaningful as a signal for risk markets' intent moving forward than US equities' performance alone this past week is the correlation across assets that are generally unrelated but for their universal connection to the risk/reward balance. Intensity was still rather tame for global shares, emerging market assets, junk bonds and carry trade among others; but they all dropped in tandem. That is a sign that the market is tuned to sentiment and simply awaits a clear catalyst. If we wanted to pick a charge, we would have quite the range to select from (political risks, trade wars, monetary policy normalization, etc). However, that commitment has yet to be made. And, complacency has proven incredibly robust. 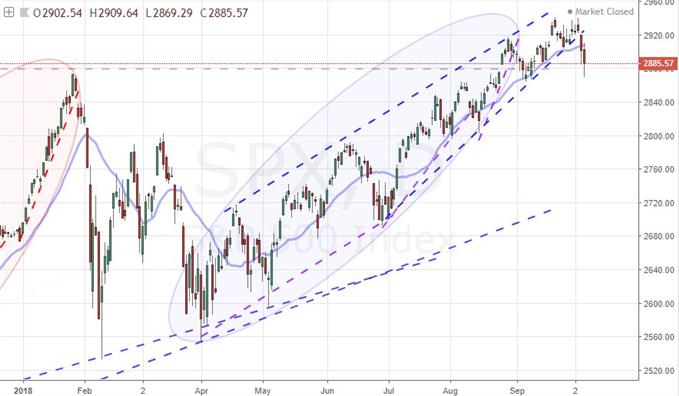 Dollar Retreats Despite a Half Century Record in Employment, What's Ahead?

Just as impressive as the tentative turn in US equities was this past week, the Dollar bears staged their own technical coup this past week. After a six consecutive-day advance - the longest advance since December - the DXY Dollar index slipped Thursday and Friday. What is frustrating for technical traders is that this correction developed immediately following a short-term bullish break for the trade-weighted index. If following the textbook for technical patterns, we would expect the progress to incite immediate follow through. In reality, the circumstances surrounding this staging always looked dubious. The Greenback spent much of its bullish capital simply traversing the range from 94.00 to 95.50. To further facilitate a bullish break on top of the swing higher would speak to a strength that simply is not present for the market. A fair representation of market conditions checking technical effort, we find the same picture for EURUSD where the break below 1.1500 (an even more polished inverse head-and-shoulders pattern neckline). The Greenback may have pushed some short-term levels, but the true range borders still stand. What is needed to transition a technical break into a committed trend - whether that be bullish or bearish - is motivation. Some would attribute a safe haven demand to the currency, but there is a carry premium following the Fed's series of hikes that needs to be hurdled before we get back to that role. Perhaps next week's fundamentals can put the currency back on course. Aside from the ebb and flow in risk, trade wars and local political uncertainties; the US docket for the coming week holds inflation data, business and consumer sentiment surveys, and Moody's sovereign credit rating update. 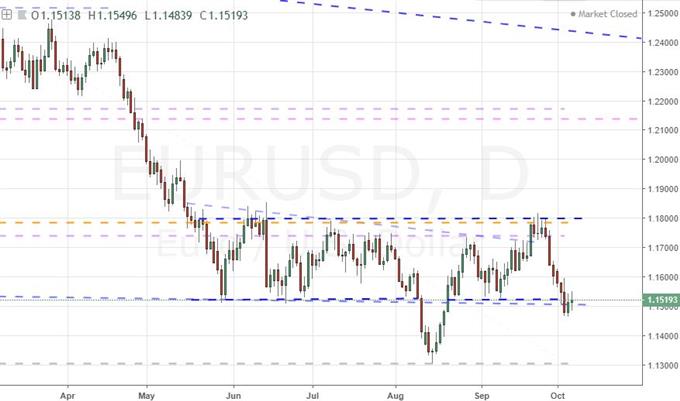 'Yield fears have gripped wall street.' Variants of that fundamental headline dominated the market newswires this past week. US Treasury Yields have been on the rise for some months. However, this past week, the benchmark 10-year instrument’s rate surpassed 3.20 percent and in turn overtook August's high. That pushed this benchmark for returns to its highest level since May 2011. What does this mean? Given the drop in equities through the second half of the week, many market commentators and traders drew the conclusion that the drop in the equity benchmarks was a direct result of this move higher. What is worth mentioning however is that higher capital markets is usually associated with higher market rates. Whether we want to consider it higher returns competing for capital or growth leading to inflation to rate hikes, there is good historical precedence for the relationship. That said, this connection requires firm risk appetite; and sentiment is not always necessary for higher rates whether through monetary policy normalization or economic stability. Another important aspect to point out in this equation is that it isn't just the US Treasury yield that is rising. There was a remarkable climb in government bond yields across European and Asia. This speaks to a genuine climb in market rates, but it also poses a clear threat to the US Dollar. If other regions' rate of return is rising, the appeal of the Dollar is called into question. Keep a close eye on government bond yields this week, but make sure to perform a thorough analysis rather than fallback on market maxims. 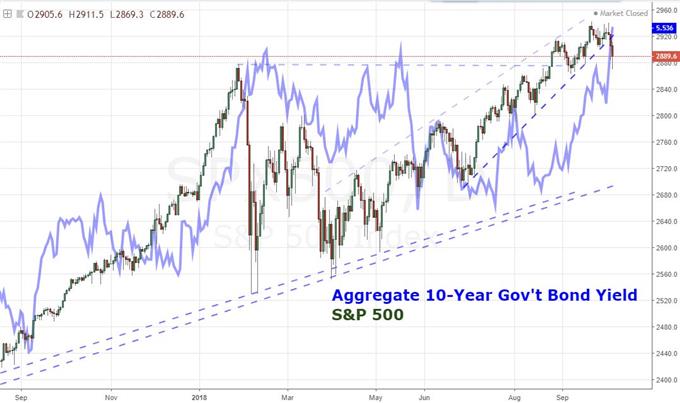 Fundamental Traction for Euro and Pound, Technical Stretch for Aussie and Kiwi

Looking out of the coming week, it isn't just equities and the US Dollar that are staged for significant opportunity. On the fundamental side, there is an appealing concentration on specific themes for the Euro and Pound. For the world's second most liquid currency (the Euro), the data on tap pales in comparison to the importance surrounding a growing systemic instability posed by Italy. The country's populist government has contravened the European Union's financial rules. Following the announcement that it wanted to target a 2.4 percent deficit-to-GDP ratio, Italy went on to announce expanded investment with China. We'll see what the Italian budget office head has to say in Parliament next week. From the Pound, Brexit is the alpha and omega in influence. That said, an equally-weighted Sterling index broke above the midpoint of the year in its charge last week in large part due to the encouraging language both UK and EU officials have been using towards their future negotiations. It was suggested Friday that the EU was considering a 'supercharged' free trade deal in a serious move towards compromise. It is still more likely that the situation suddenly clears than collapses with six months to go until the cut off, but we are no longer sitting at a deep discount. With far less fundamentals but much more technical appeal, both the Australian and New Zealand Dollars can be monitored closely for potential. An equally-weighted measure of the former's crosses is at a two-year low while the latter's is at a three-year trough. They can certainly head even lower, but the potential for recovery when properly motivated should be a scenario for which we prepare. We discuss all of this and more in this weekend Trading Video. 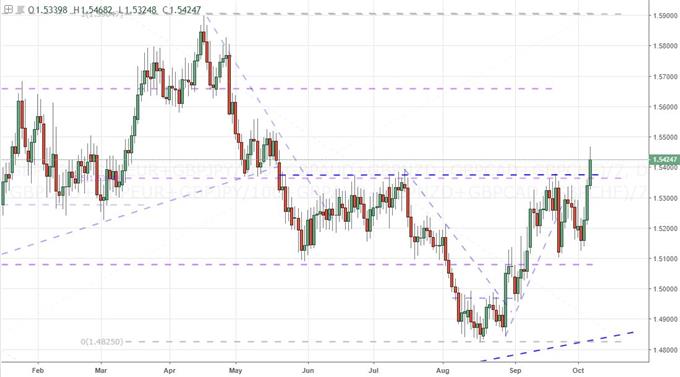