Dollar Bowls Through Resistance on its 6-Day Charge, Pangs of Concern from US Equities

Depending on where you are to look, your evaluation of the market's health (course and tempo) can turn out very different. The Dow for instance this past session initially shot to a fresh record high before an inevitable retreat leaving a significant 'upper wick'. Nevertheless, the major US indices are lurking close to their record highs with clear inference to speculative appetite. Yet, there is little of that enthusiasm outside of this specific asset class from this specific region. Wednesday proved a particularly noteworthy day for risk aversion. While global equities were a mixed back, there was a notable retreat from other asset classes such as the EEM emerging market ETF, the HYG junk bond ETF and the Yen crosses as a reference to carry trade. It wasn't a deep enough current to unsettle the broader market and trigger any systemic fears, but the mixed bearings will keep investors on guard and sensitive to fundamental trouble through any of the major venues of concern still on the outskirts of the market's focus. One thing is clear, the resolution to one front of the global trade war instigated by the United States (with Canada and Mexico) hasn't triggered a windfall of enthusiasm for a happy outcome for other economic confrontations. The Canadian Dollar's post NAFTA deal rally has lost lift just a few days after the agreement. What hope does broad risk have. Meanwhile, keep tabs on the outright pressure of the US-China engagement (my preference is via AUDUSD) as well as concern that lingers in postponed threats by the US to exert pressure on the EU and Japan (I am monitoring the auto industry via CARZ). 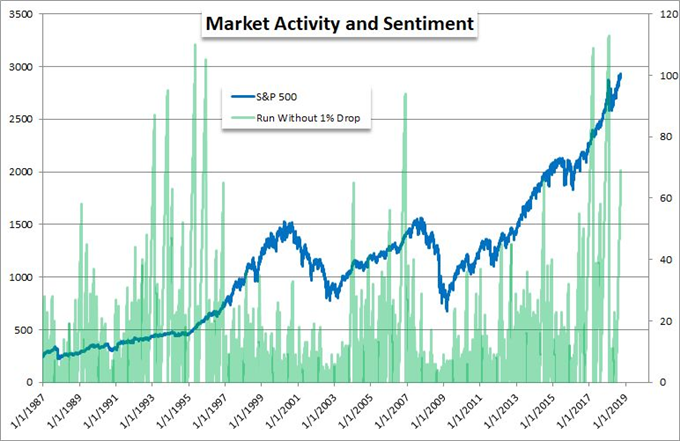 Dollar Bulls are Clearly in Control but Do They Have an Agenda?

Where US equities are still spinning their tires shy of a fresh record, the Dollar has stepped up to support a productive bullish run. The ICE's DXY Dollar Index this past session extended its climb to a sixth consecutive trading session to register the longest climb since December -and the second most persistent run since November 2016 surrounding the US election. The implications for the EURUSD were technically intriguing. The momentum pulled the benchmark pair below 1.1500 which is a frequently tested trendline and the right shoulder on an inverse head-and-shoulders pattern. And lest we presume the Greenback's performance was simply the product of an indirect response to the Euro via the most liquid currency cross, an equally-weighted USD index shows the same enthusiasm Wednesday and its own technical progress. So, where was this motivation coming from? It is crucial we assess the source of this conviction if we are going to evaluate its potential for follow through. Data through the past session was impressive. The ISM's service sector report (covering three quarters of US output and jobs) climbed to a 20-year high in a remarkable sign of confidence for US economic activity. Yet, does that tap into the active catalysts for the financial system these past weeks and months? Why then didn't equities advance on the same news? Perhaps the surge in the 10-year Treasury yield - to its highest level since late 2014 - is a sign via monetary policy expectations. If that is the case, it wasn't showing in Fed Fund futures. Given the markets will start to focus on NFPs on Friday, the uneven confidence in trade wars and the speculative positioning in Dollar and Treasuries; I will remain more cautious of the currency's intentions. 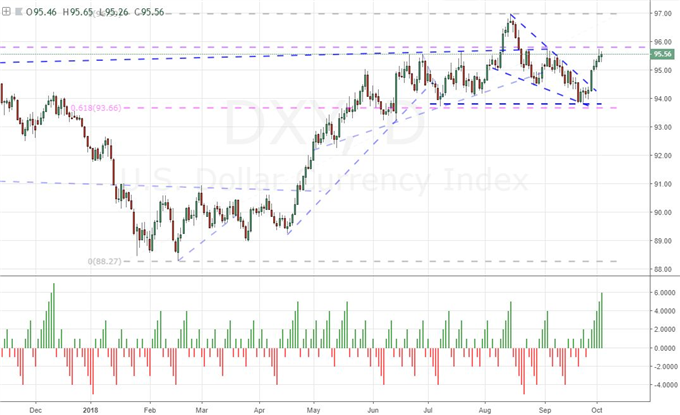 Euro and Pound Are Beholden to Local Concerns for Better or Worse, Momentum or Chop

It has been the case more than a few times in the past years, that a strong market movement has evolved from the collective advance or retreat of a benchmark currencies' major counterparts. For the Dollar's primary counterparts, there is tangible underperformance - though they are not exactly consistent in their projection of persistent trend. The Japanese Yen is under pressure across the board owing to its funding currency capacity and a generally favorable lean on sentiment - though the disparity discussed before and the mix for the crosses should keep confidence at bay. The British Pound has strained anew under the more recent struggle to muster a clear and encouraging bearing for a Brexit resolution between the UK and EU negotiators. We are still left with the EU's rejection of the Chequers proposal outright and Prime Minister May's popularity at home is clearly a point of uncertainty for the future. Meanwhile, the news that the government may finally drop its drive for austerity following the evaporation of the Great Financial Crisis fallout may offer little relief. And then there is the Euro. The second most liquid currency in the FX market is facing a redux of its sovereign debt crisis of 2009-2012 as Italy continues to beat the drum of fiscal relief against the targets set out by the EU. 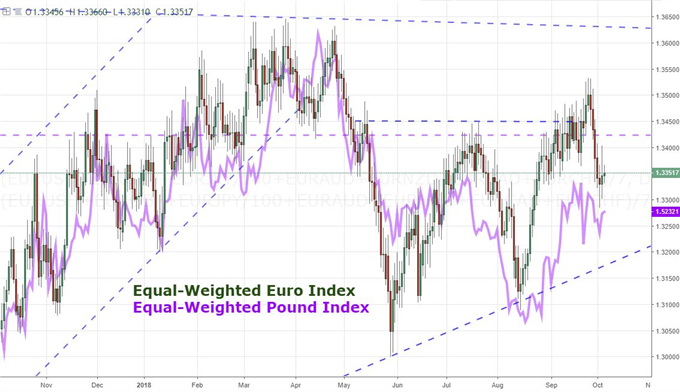 Commodities and Carry Currencies Offer Traction in a Unmoored Market

Risk aversion would reach into the ubiquitous - if aged - carry currencies as well this past session. While the usually-included Canadian Dollar has been led astray by its connections to the NAFTA breakthrough, the Australian and New Zealand Dollars meanwhile were not so distracted readily distracted and succumbed to the gravity of general sentiment. Equally-weighted measures for both currencies dropped this past session. The Aussie version would extend a multi-month bear channel and was encouraged along by a sharp drop in building permits to add pressure on a housing market that the RBA warned about following its rate hold. In commodities, the general rise in the asset class looks more like the US indices than the myriad of other risk assets struggling - at least recently. Crude oil revived its advance following Tuesday's stall. The start and stop is familiar, but so too is overall progress. Gold on the other hand would not retain traction to make it beyond the upper bound of its multi-week range at 1,210. Without a systemic risk aversion and/or fallout from monetary policy's extremes, a lasting bull trend will remain out of reach. We discuss all of this and more in today's Trading Video. 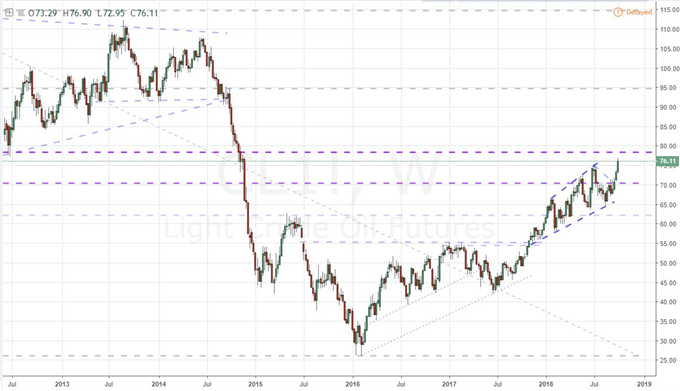