A Break in the Trade Wars?

Is this the break in the clouds that signals a global turning point for the ever-growing trade wars? Confidence was charged - or more broadly 'on the mend' - to start the new trading week with news that the at least one front of the export crisis finally hit compromise. The stand off between the United States and Canada that was winding dangerously towards the expiration for a deal to be reach found its break through over the weekend. An agreement was struck on issues including dairy, autos and existing metals tariffs among a few other hold out issues. The agreement brings Canada into the fold of a deal already agreed-in-principal between the United States and Mexico. The news was a clear point of enthusiasm for the Canadian Dollar and markets. That is owing in large part to the fact that said economy had the most to lose in the event that no resolution was found. More practically, the uncertainty to the end meant that the Loonie was still trading at a meaningful discount. USDCAD dropped below noteworthy support at 1.2900, but an equally-weighted Canadian Dollar Index showed a more remarkable move for the target currency in general. How much run can be leveraged for those markets and currents directly involved. The Dollar was virtually unmoved on the day while the Mexican Peso managed to squeak out a small advance. Yet, even for the Loonie, the avoidance of a crisis is not necessarily the same thing as a platform for renewed bullish interests. 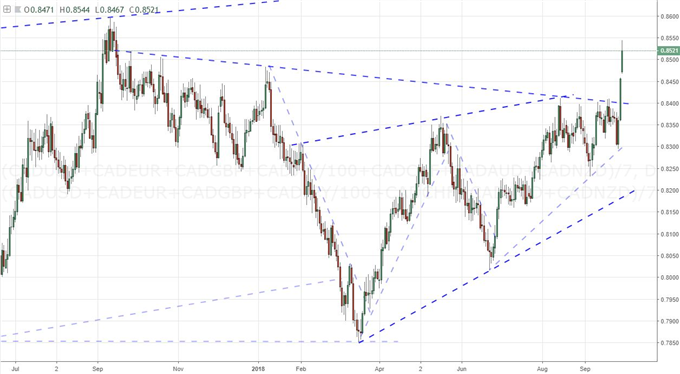 Looking for a more systemic windfall in enthusiasm from the first legitimate trade war resolution, traders should perhaps evaluate the circumstances fully before executing positions based on overwrought expectations. The restraint from the US Dollar and Mexican Peso should signal that the influence will be limited. Looking for the 'risk' impact of the high profile headline today, there was a notable response specifically from the major US indices. That said, the strong start and maintenance of buoyancy was most tangible for the Dow Jones Industrial Average. Why would this typically-stodgy blue-chip index outperform the broader base S&P 500 or the high-flying tech-centric Nasdaq Index? The companies that comprise the Dow are more heavily multi-national conglomerates whose revenue and supply chain are more heavily dependent on global connections like that with Canada. Yet, look any further and we would be hard pressed to even register a positive performance on the day. It would be charitable to label the European indices 'mixed' and Asia was largely closed Monday. Further alternative speculative assets were even laced with outright losses. The Emerging Market ETF would seemingly epitomize the asset range that would most benefit from a resolution in the developed world economic fight, but the EEM held fast at its resistance. If there are implications for how this negotiation was finally signed for situations like those faced between the US and EU or US and Japan, the markets are not bold enough to project. As for the US-China trade war, there is little probability that this week's progress will transfer to the more than $350 billion engagement between the two largest economies. 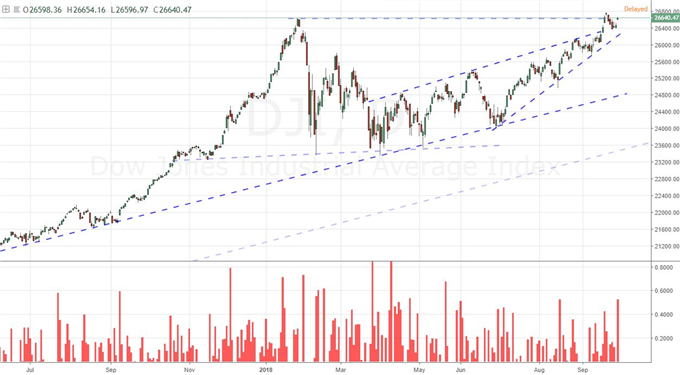 With the volatility in targeted assets related to the first trade war reversal Monday, it was difficult to be temporarily drawn away from other fundamental matters. For the US Dollar, the lack of fanfare following the FOMC rate hike last week and the rise of political risk with the mid-term election cycle heating up; there is plenty of uncertainty to anchor weakly-held enthusiasm. Meanwhile, the Euro is feeling more of the pressure of its own fundamental threats. The return of systemic risk to the Euro-area is once again palpable. Where the origination of the threat isn't Greece this go around, the source of risk is just as ominous. Italy's coalition government agreed last week to move forward with a 2.4 percent deficit-to-GDP ratio target over the next three years which was bound to raise the ire of the European Union. As expected, the EU's Dombrovskis said the objective was not compatible with the Stability and Growth Pact while Commissioner President Juncker said further special treatment for Italy could spell the end of the Euro. Italy's Deputy Prime Minister Di Maio said remarks like these were akin to market 'terrorism'. Meanwhile, the EU's constant stonewall of the UK's efforts to negotiate an agreeable Brexit may be bearing fruit for the group. While Chancellor Hammond suggested they would push forward with Austerity, there were reports that Prime Minister May was readying a new proposal for EU leaders which could make concessions on a number of issues. In contrast, the EU and Switzerland have yet to come to agreement and the Swiss Franc is suffering for it.

Event Risk for US Oil and the Australian Dollar

As a risk asset, commodities are still doing better than most assets classes with speculative designation over the past few weeks in specific. At the top of the performance charts in particular has been crude oil. Yet, where the UK-benchmark Brent already made its move before with the clearance of $80, the truly remarkable technical progress was made by the US-preferred WTI oil contract. The charge above $74 easily soared through $75.50 to hit highs last seen since November 2014. A break through in trade restrictions between a previous producer (Canada) and consumer (US) does little in an environment nowadays where the US is one of the largest producers. Instead, it seems like we are reverting back to standard supply-demand considerations. News that exports from Iran hit the lowest level in 2 years before US sanctions go into effect and Saudi Arabia voicing doubt that it will be able to make up the shortfall may be guiding the market once again. Back in the FX world, the upcoming session has a few fundamental highlights - like Fed Chair Powell's remarks - but the stand out is the RBA rate decision. If the wayward carry currency registers any hint of a future rate hike, it can systemically change the course and pace of the Aussie Dollar - just as the ECB's water testing leveraged back in 2017. We discuss all of this and more in today's Trading Video.