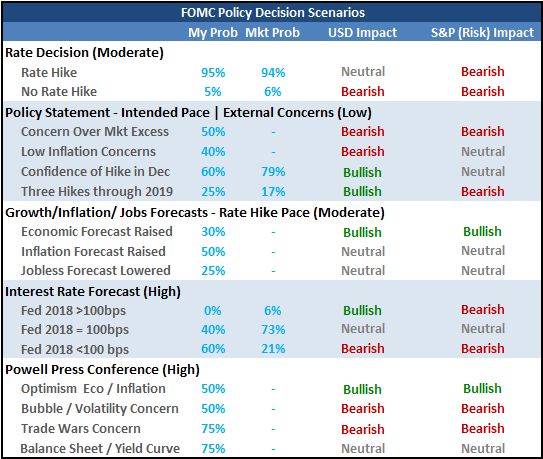 This Fed Rate Decision Matters - Now What to Expect from the Dollar?

This is a Rate Decision That Absolutely Matters

Not all rate decisions are created equal when it comes to market influence. Little anticipation of market movement registers heading into a Bank of Japan, Reserve Bank of Australia or Swiss National Bank policy meeting. In fact, there is considerable discrepancy in the market moving capacity of Federal Reserve (Fed) rate decisions as well. Though the US central bank is indisputably the most hawkish of the major authorities, the group's policies have been so thoroughly projected that actual rate hikes are often overlooked. Contrast that obliviousness surrounding the Fed to a scenario where any other major group were to tighten. The news would otherwise prove profound with material volatility with likely rally for the currency in question. For this particular FOMC (Federal Open Market Committee) gathering, a rate hike alone will likely produce little influence on the US currency and capital markets. Looking to swaps and Fed Fund futures, we find financial participants are essentially fulling pricing in a 25 basis point increase to the target range to 2.00 - 2.25 percent. That would in turn represent the third hike of 2018. Yet, presumably, this outcome is fully represented in both the current standing of the US Dollar as well as the country's benchmark equity indices like the Dow and S&P 500.

The Details Upon Which Market Winds Will Shift

If you are looking for a systemic shock to the system, perhaps one of the most dramatic outcomes from this policy gathering would be no change to rates by the Fed. That restraint would be extremely unlikely however. While we may consider the gradual pace of hikes these past few years the group's primary policy effort, in truth, it is the forward guidance they issue. Knowing that it is fostering an extremely divergent monetary policy (nearly every other major group is near 'zero' rates and/or continues to build its stimulus program), the Fed has had to walk an exceptionally fine line to back out of extreme accommodation without triggering undue volatility via a sense that it may not step in to stem any and all bleeding suffered on behalf of investors. In reality, the effectiveness of such extreme easing has already lost its ability to support boundless speculative appetite - just look at the ECB and BoJ. With the fine tuning of rate forecasts, the assumptions are as explicit as the outlook for a hike at this month's meeting. The probability of a fourth hike in December was the (slight) majority according to June's Summary of Economic Projection (SEP), and the markets are showing a similar degree of enthusiasm via swaps and Fed Fund futures. Again, here, it would be difficult to upgrade bullish anticipation as the Fed is already carving out an unpresented pace. Reinforcing the fourth hike in December and three to four further hikes in 2019 would be the most likely 'hawkish' and thereby 'bullish' outcome, but such course is largely set in pricing. Alternatively, if there is any interest in tempering intentions owing to trade wars, political risks, asset prices excess, etc; even a modest downgrade in intent will quickly be seized upon. It could even have a negative impact on equities as a risk asset as recent record highs are based on the current tempo - likely registering a needed downgrade as a sign of trouble ahead. 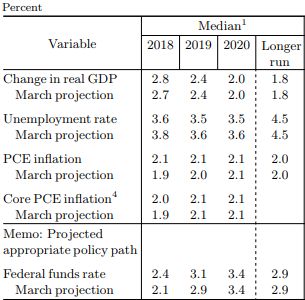 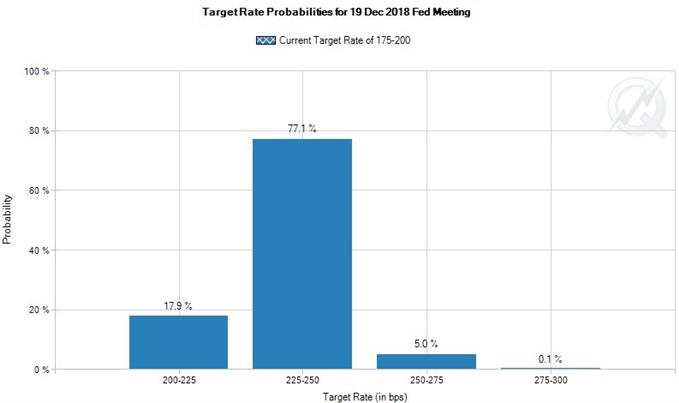 Chosing the Proper Tool for the Job

Given how slight the chance that the Fed can materially upgrade its hawkish policy lean, the trade scenarios for such an outcome are few. That said, when the markets afford little chance of a particular outcome; its materialization forces a much larger swath of the financial system to reprice which in turn affords a more remarkable market impact. It is difficult to attribute any bullish expectations to risk assets to essentially raising the cost of borrowed funds. Alternatively, such an outcome could boost the Dollar. That said, there are few pairs for which a rally for the currency would look truly appealing from a fundamental or technical perspective. Naturally, the more probable 'hawkish outcome whereby the group keeps to four hikes in 2018 and projects sustained pace into 2019 would meet even more stringent second guessing. An AUDUSD or EURUSD retreat into range would likely be the most reliable scenario. Alternatively, a dovish turn could catch Dollar and risk assets off balance. Among the majors, EURUSD continuing a charge above 1.1700 would catering to continuation off an inverse head-and-shoulders pattern. While the Euro is certainly not an ideal bullish counterpart, it is rather stoic in course setting. For USDJPY, motivation for a sustained Dollar retreat could coincide with risk aversion for a stronger backdrop. AUDUSD is another exchange rate where a Greenback slide could leverage a discounted counterpart and help restore some lost beliefs over what represents a carry currency and what does not. On the other hand, I would not trades a bearish or bullish view from the Dollar via NZUDSD, USDCAD or GBPUSD. An RBNZ rate decision Wednesday, open chance of a US-Canadian trade deal collapse or breakthrough, and Brexit convolution are all unnecessary complications. We focus on the FOMC rate decision and its market impact in today's Quick Take video. 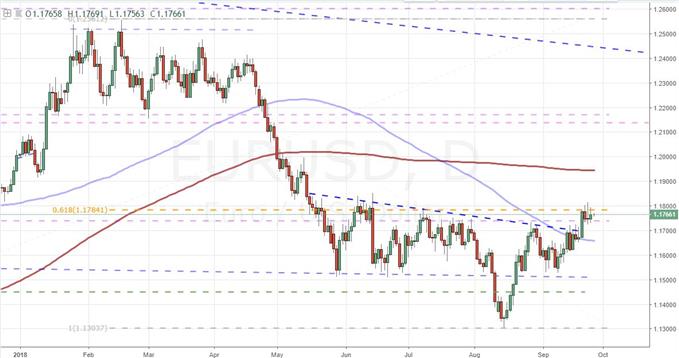