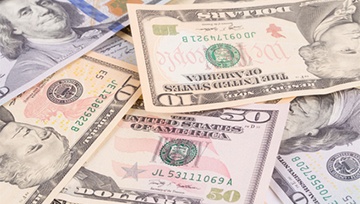 Markets opened the week with a sense of uncertainty and then anticipation - always with a undercurrent of anxiety. This past week ended with reports that US President Donald Trump was contemplating following through on a massive escalation of the ongoing US-China trade war. Naturally, the next move would be to implement the $200 billion increase in tariffs on Chinese products that the country closed to public feedback a few weeks ago. As the clock wound down through Monday into the twilight hours of the New York session, the leaked reports of an impending announcement accelerated. A statement by the President's Chief Economic Adviser, Larry Kudlow, followed with more explicit guidelines and a repeat of language that made clear the US would keep pressure on both through policy and guidance. With the warning that the President would issue an announcement 'after the market close', concern started to build amongst speculators. Yet, despite the implications, there was little in the way of a flight to safety. Well after the US exchanges settled, the White House announced a 10 percent tariff on an additional $200 billion in Chinese goods that will go into effect on September 24. That rate would increase to 25 percent at the end of the year. Further, President Trump warned that if China retaliates, he would move on to phase three which would be to pursue the further $267 billion he threatened just a few weeks ago. It is almost certain that Chinese President Xi responds, but this increase takes us beyond the total notional imports of US goods into China. So, this situation is due to become even more of a mess. Will general risk trends finally pay heed? 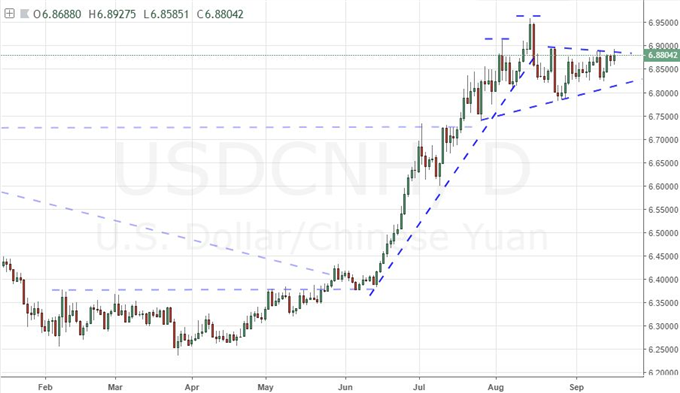 As the US looks to ramp up its economic assault against its largest economic counterpart, it is important to keep in mind the ramifications to the Dollar as much as it is to worry over the impact to those coming under pressure from these aggressive policies. There is a superficial belief that the Greenback will benefit as it is the aggressor in this standoff, but that belief is generally discredited by international investors owing to the amplification to growth that comes about owing to the country's participation in global growth. Those falling back on standardized roles may also assign the Dollar a bullish appeal owing to its reliable safe haven appeal. Though the USD finds itself at the middle of many fractured trade relationships, it is still the most liquid and ubiquitous currency. In the event of a full-blown financial crisis, the market will prioritize market depth over all else, and the Greenback will be one of the few harbors in the scorched Earth financial markets scenario. However, in between a crisis and a full-speed speculative sprint, the Dollar is set to struggle. If global markets don't start to falter, other currencies will start to catch up to unique Dollar. If sentiment starts to flag, the Fed's pace is at risk and its status as a carry currency can begin to undermine the benchmark's unexpected yield appeal. Another aspect that could start to trouble the Dollar was related to something else Kuldow mentioned: forecasts for deficits of 4-5 percent of GDP over the next few years. The top reserve status of the USD is not permanent, and policy will add serious pressure to this role moving forward. 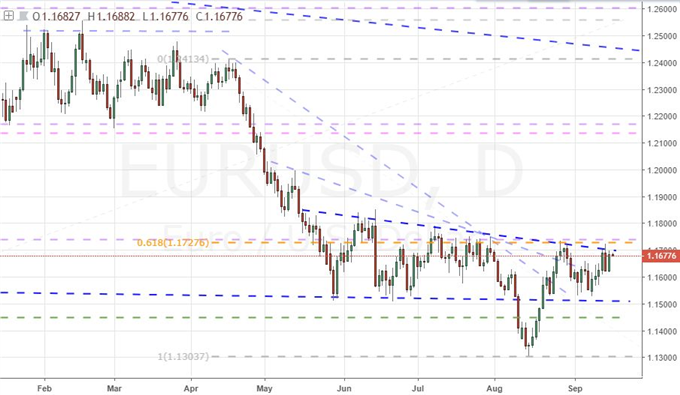 There was a brief respite in the United Kingdom’s (UK) and European Union's (EU) posturing over their divorce. Optimism and spirit of compromise shined through as if light through impenetrable clouds. That gap has since closed up however. To start off this week, the language was further positioned to signal the fight the two sides were willing to pursue. UK Prime Minister Theresa May said remarked that the alternative to the Chequers plan that the government had offered up was 'no deal'. It was reported in turn that the EU was preparing emergency laws in the event of a hard Brexit as such an outcome looked to be more and more likely as time and barbs passed. Interestingly, the Pound managed to advance this past session despite the air of belligerence. Whether you are bullish and intend to play the break from the likes of GBPUSD or GBPJPY, or you are looking to fade the effort; it would be wise to await the key event risk later this week. There is an informal EU leaders meeting scheduled Wednesday and Thursday which will give insight over whether they are going to make greater effort to comprise to meet the UK's demand. If not, the crash out is an even higher probability outcome. 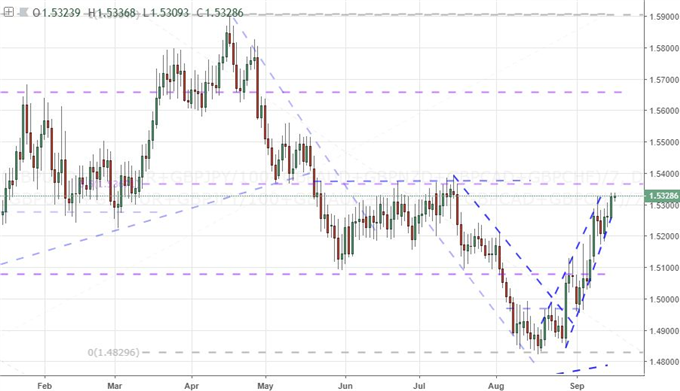 China is not the only target for the United States trade war drive. Another open negotiation is between the world's largest economy and its neighbor to the north: Canada. We were supposed to have had a resolution to this particular stand off the past two Fridays, but the issue keeps being pushed forward. Relative to its standoff with China, the US dealing with Canada can more readily find a simple breakthrough - at least as far as the market is concerned. It could also fall apart. Have options to trade either outcome and keep an eye on the headlines. The impact of the US-China trade war finds poor measure in core 'risk' assets and the Chinese markets are terrible metrics. However, export economies who are dependent on Chinese growth for their own wellbeing can represent undistorted reflection of growth or pain. Both the Australian and New Zealand Dollars offered up activity readings through Monday that was so quiet, it was only comparable to the holiday period at the turn of the year from 2017 into 2018. Expect this activity level to reverse, but what does that mean for trading options? Then there is commodities. Generally, the asset class is floundering with gold hovering near multi-month lows while crude oil is holding to range but on the end of a decidedly-bullish general trend. If you look at Gold relative to its speculative counterpart in silver or WTI crude oil against its Brent counterpart, the pictures grow more interesting. We discuss all of this and more in today's Trading Video. 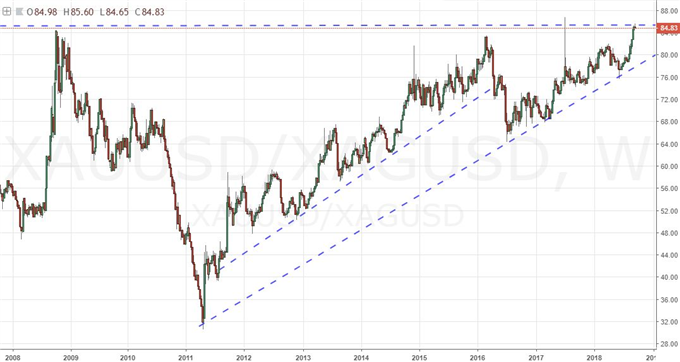