Do you want to sort what top fundamental themes can influence the markets over the week ahead or learn how to combine fundamentals with your technical analysis? Sign up for the weekly fundamental trading webinar Monday or other regular trading events on the DailyFX Webinar Calendar page.

A Suspicious Pattern of Weekend Uncertainty

There is an unusual pattern starting to form in global markets. The financial system is repeatedly starting off weeks with a fundamental charge with volatility leveraged by some renewed threat to otherwise familiar and systemic themes. As the week wears on, however, a familiar lethargy sets in as market participants repeat a habit of placing their conviction in complacency upon which they downplay the risk that prominent threats will solidify into self-sustaining speculative assaults. Benchmarks stabilize and rebound into the closing hours of trade for the week; and then, some breaking news shatters the calm just before liquidity fully drains. This uncomfortably familiar pattern showed up once again this past week. By the afternoon hours of New York trade, financial headlines were flashing with reports that US President Donald Trump was intent on implementing the $200 billion upgrade in tariffs on Chinese progress that his administration had proposed despite the calls for a return to the negotiation table. This is not particularly surprising given the tactics the US leaders have employed before, but it still adds a speculative charge when it is running across news wires. It is hard to believe that a government would aim to promote unease so broadly and consistently, but it is difficult to ignore the consistency. 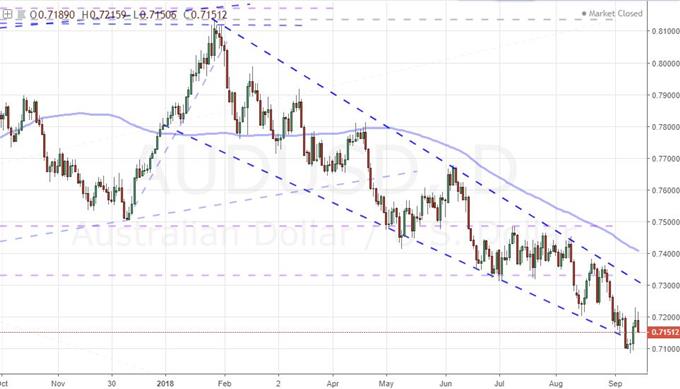 An Imbalance of Risk Trends for Those Looking for Charge

Trade wars are just one unsettled fundamental theme keeping the markets off kilter, but it is one of the most active. There are other general concerns that traders should keep tabs on if they intend to monitor the state of health in the financial markets. We have passed the European Central Bank (ECB) and Bank of England (BoE) rate decisions this past week and the Federal Reserve is expected to hike its benchmark rate towards the end of the month, but this interim period should not lead us to believe that monetary policy will be completely ignored. There is still a Bank of Japan and Swiss National Bank rate decision this week, but the real importance of this theme is the general move to normalize from extreme, emergency settings across the system for a market that has based much of its perceived stability on the abundance and permanence of external support. Emerging market contagion is another risk that hasn't been resolved between Iran's threats to withdrawal from treaties, Russia on the line for more sanctions and Turkey dramatically hiking its rates. If markets are prompted to seek out cracks, they will find one in this high risk (and remarkably low return) group. Then there is the rise of political risk. Sure there are issues in Europe and Asia, but the approach of US mid-term elections will raise concerns over stability given the media's and President's penchant for bombastic headlines. Against this backdrop, we have the S&P 500 and Nasdaq just off of record highs to start the new week. And, we have a host of other risk-leaning assets substantially lower after months of decline. What is the earnest reflection of sentiment? 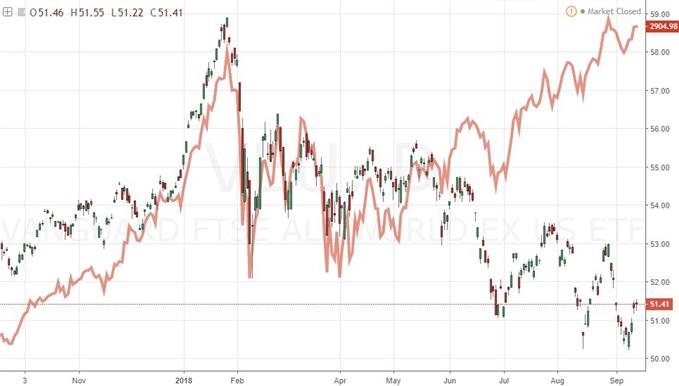 Despite a consistent slide from the Dollar through most of this past week, the Greenback wasn't able to bring its technical build up to its conclusion. Friday's rebound offered the DXY Index the reprieve it needed to avoid a break through its 100-day moving average support. Conversely, EURUSD was held back from a clearance of 1.1700 resistance which could have leveraged a move that could have - at the very least - signaled the beginning of a technical reversal. The fundamental question of what is or could drive the Dollar to its next trend is unclear. Another strong consumer sentiment report may have buoyed the Dollar, but likely so did the renewed aggression for trade wars. Through the next week, September PMIs as proxy for 3Q GDP and TIC capital flows data registering trade wars fallout will likely fall short of what matters most for those trading the Dollar. The same general uncertainty holds for the Euro. An equally-weighted measure of the second most liquid currency is still holding at the top end of a multi-month range, but it needs a fundamental hand hold to market further progress. Euro-area PMIs, the regions broad trade figure and a summit between the ostracized Hungarian Prime Minister and Russian President Putin will likely make headlines. Yet, they will struggle to earn material trend for the Euro. If EURUSD does find a clear bearing it is more and more likely to arise from a systemic development. 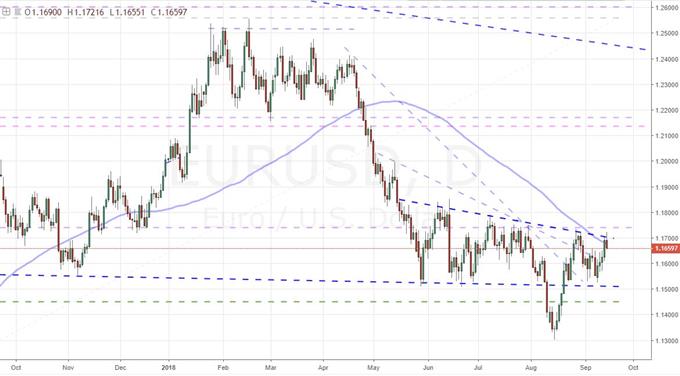 The Leverage of Brexit, NAFTA, an SNB Rate Decision and Pricing

Trading attention - and opportunity - ahead will not simply be dedicated to the top two currencies and the most risk-sensitive benchmarks. In the FX word, the Pound retains some of the greatest potential. If there is a sudden clarity to befall the Sterling through Brexit - whether a compromise or definitive course towards 'no deal' - the currency's future will be clear. Key Pound crosses like GBPUSD have already made an opening move at a recovery, but follow through demands conviction that the theme is unlikely to provide. BoE Governor Carney issued a clear warning this past week that a crash out could result in conditions worse than what was experienced during the Great Financial Crisis. There is an informal EU leaders' summit on Brexit this week, but the uncertainty remains primarily with the UK politicians' position. Just as the Pound would rally if the Brexit led to a clear compromise, the Loonie is well positioned for a charge should the NAFTA negotiations lead to a compromise - for what is supposedly a USMC replacement. An equally weighted Loonie index is at the top end of a well-established range, but the same technical opportunity is not evenly distributed through the crosses. For event risk ahead, the Swiss National Bank (SNB) rate decision is one of two key updates, but it is also one of the most over-looked major monetary policy authorities. The Franc has charged higher these past months and the SNB is singularly interested in devaluing the currency. Can they achieve these desired outcome? Finally, we have commodities. Gold has worked itself into an inevitable technical break, with a prevailing medium-term bear trend but a rising threat of risk aversion that caters to the metal's bulls. We discuss all of these markets and event risks in this weekend Trading Video. 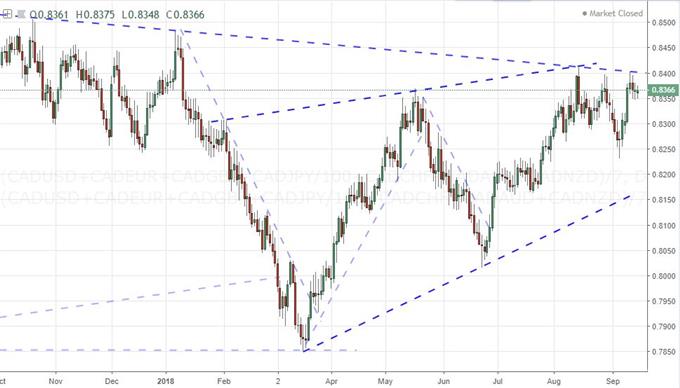