S&P 500 and Emerging Markets Set Market Contrast, Don’t Expect Much from the Euro and Pound

See how retail traders are positioning in EURUSD, GBPUSD, and the rest of the FX majors, global indices, gold and oil intraday usingthe DailyFX speculative positioning data on the sentiment page.

One of the best signals that risk trends is acting as both the lead and whip for global markets is an unmistakable correlation across a range of assets that would otherwise follower their own unique courses. There is certainly plenty of fundamental uncertainty to raise concern and more than a few dramatic moves that have popped up over the months, but there is an unmistakable disparity between the range of risk assets. The contrast between the S&P 500 on one end of the spectrum to the EEM ETF on the other these past six months should reinforce that. That said, through this past session, there was broad restraint in markets from US to global equities, emerging markets to junk bonds, Yen crosses to Treasury yields. Clearly, there was little charge to the sentiment in just the past 24 hours. And, our outlook for the next 24 hours should be set to similar conditions. The docket is light for high profile events and the systemic themes we have seen trends develop through have settled materially lately. The constant hum of domestic political risk from the US to Europe to Asia is still in the background but not motivating any broad repositioning. As for the emerging market contagion fears of the past weeks, IMF Director Lagarde expressed her concern clearly this past session but traders were exhaling on their tension. No doubt these threats will return, but meanwhile, it isn't worthwhile to chase ghosts. 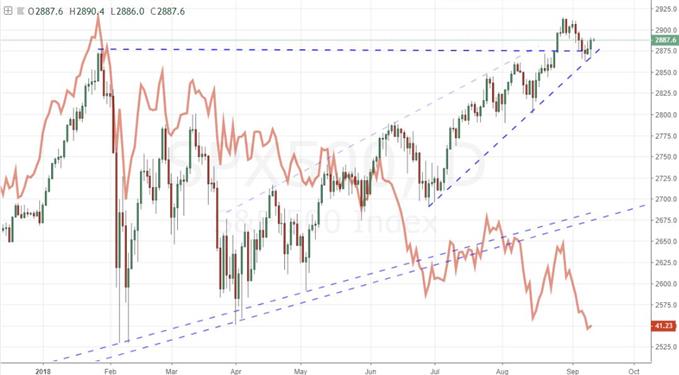 A Little Progress and a Lot of Fret in Trade Wars

If we are keeping tabs on the most systemic threats to gauge progress and momentum, the trade wars are an active influence with a few milestones that can quicken the market's pulls - for both better and worse. The most pressing threat remains in the US-China tariffs which remains on course to engulf both country's entire exports with each other. We are still waiting to hear the Trump administration’s determination on whether or not to pursue the $200 billion increase in tariffs against its primary counterpart following the closure of the public comment period last week. Previously, weeks passed between the close of the feedback window and the execution of further import taxes; but the lack of follow through from the Yuan and obstinacy of Chinese officials in the negotiations will likely shorten that timeline this go around. As for the still loose verbal threats the US has cast towards the EU and Japan, there has been no further progress beyond rhetorical sparring from trade ministers and economic leaders. Not all is negative, however. This past session, the Canadian Dollar shot higher in the afternoon session when it was reported that the US and Canadian negotiators may have found progress through the impasse on dairy. The move was sizable and the performance from the Loonie versus the Greenback shows who stands to gain or lose the most on the health of trade.

The Dollar Finds Little Motivation in a Run of Data

In terms of event risk, the US Dollar had one of the more active tickers; but that didn't translate into material price action for the currency. Both the DXY Dollar Index and an equally-weighted measure of the benchmark offered up rather restrained activity that has done little to prompt a clear intent for the former's head-and-shoulders pattern - whether to negate or follow through. For traditional economic measures, the NFIB Small Business sentiment indicator and JOLTS job openings figures are minor players relative to the likes of NFPs, but their readings and fundamental insight more than compensated. Both hit record highs which cools concern about political instability and an imminent peak in hiring from the former and later respectively. Off the docket, but just as important: the CBO reported its August deficit projection of a sizable -$211 billion. The rise in the US debt load will slowly erode confidence in the currency and undermine the country's top credit rating alongside the trade war. This can prove a silent killer for the Dollar long-term just as engaging in a multi-front trade war is likely to do. Another interesting development that isn't an event so to speak but an important statement on fundamental priority was the further advance in implied rate forecasts through Fed Fund futures. The yield derived from the June 2019 futures contract rose to 2.61 percent - the highest in over 10 years. Yet that progress did not contribute any additional lift to the currency. That should be a surprise though as rate forecasts have deviated wildly from the Dollar's course over the past nine months. 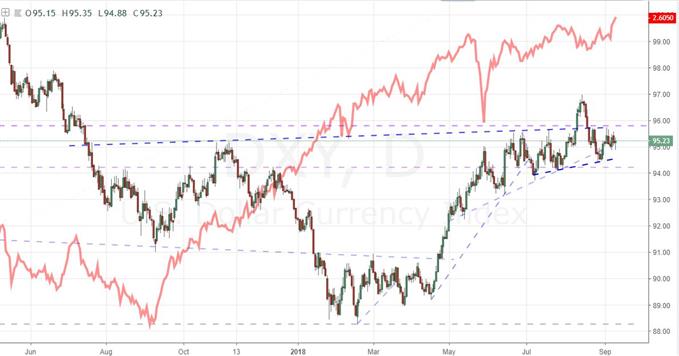 If You Want Immediate Trade Opportunities, Look Elsewhere than Pound and Euro

If you are looking for active trades in the immediate future, the Dollar is probably not a good currency to troll. That isn't to say there isn't considerable opportunity from the currency and its crosses in technical and fundamental terms. In fact, there is quite a bit. However, there are very particular triggers for motivating this market and they haven't recently shown meaningful presence. That same potential with a long fuse is the setting for the Euro and Pound as well. This past session, the Sterling hosted a few fundamental highlights of note. The jobless claims offered a disappointing climb though earnings would also rise. Offering a sense of much needed stability, BoE Governor Carney agreed to extend his tenure at the central bank another seven months (to January 2020) in order to help with the Brexit transition. As noteworthy as these events may be on their face, they wouldn't move a currency fixated on Brexit developments. And lower level event risk won't sway a market that is awaiting a BoE rate decision on Thursday. From the Euro, the event risk was more concentrated in the ZEW investor sentiment surveys which beat expectations. That certainly wouldn't get on the radar of traders blotted out by the ECB rate decision due on Thursday as well. Hosting a meaningful move through Euro or Sterling crosses before these key events will be difficult. Given the more systemic risks lingering in the fundamental depths, these rate decisions would themselves struggle to command trend. We discuss all of this and more in today's Trading Video. 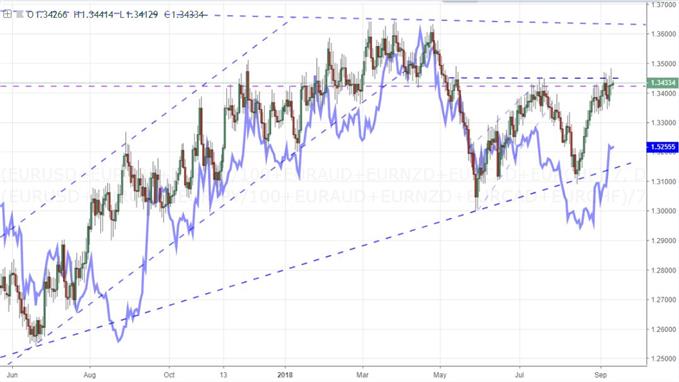