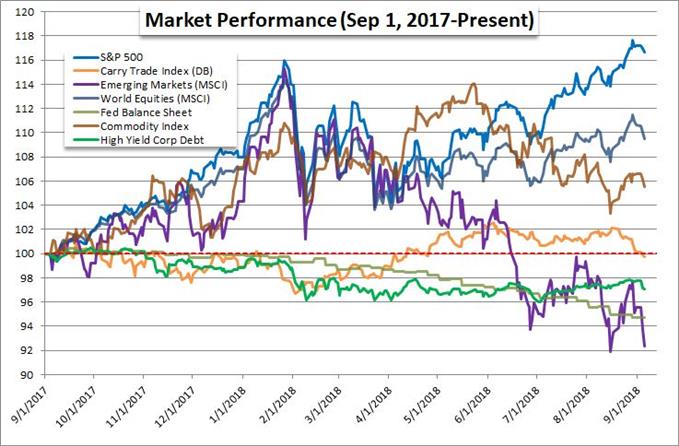 Overall, sentiment was still set to 'risk aversion' this past session. The persistence of trade wars, emerging market uncertainties, economic concerns and growing political risks continue to compete for our attention. However, through Thursday, there was a notable shift in those assets that were most effected by the fade in investor conviction. Throughout the week, the heaviest it in the global capital markets was coming through those assets at the most extreme end of the spectrum: emerging markets and junk bonds. The EEM emerging market ETF certainly didn't relinquish any of its pressure standing at the cusp of a technical bear market (20 percent off highs), but it also wouldn't extend the previous two weeks' tumble. The HYG junk bond ETF similarly held steady after its massive gap down earlier in the week. Taking up the reins were equities. The pain was evenly distributed with Australia's ASX200 making a bid to banish any hope that it could hold onto its climb, and European indices finding troubled representation from the DAX, FTSE 100 and CAC 40. In the US, the S&P 500 and Nasdaq 100 moved up to important technical support levels. For the former, the 2,875 former double top for record highs is staged below while the latter is holding at the floor of a five-month old rising trend channel at 7,450. It is worth noting that the Dow has not joined the scrum, suggesting fear is not fully set in US equities - much less the financial system.

Keep a Close Eye on the Big Picture in Trade Wars

There are a number of high profile - albeit complex - fundamental themes keeping the pressure on the global markets. Growing political risks is perhaps one of the most under-appreciated threats ahead (the US, Europe and Asia); but until it starts to claim financial and economic victims, a market well practiced in complacency can ignore it. An emerging market contagion is another viable endemic threat that can spill over to the developed world to encompass the globe, but the spread of that fire seems to have at least temporarily held at the forest's edge. Trade wars may be a now-familiar and significantly discounted issue, but it is far from being reasonably reflected in our still buoyant markets. The NAFTA negotiations specifically between the US and Canada failed to find a breakthrough yet again this past session, leaving North America's collective health in limbo. Meanwhile, the period for public feedback on the Trump administration's proposal for a $200 billion increase in tariffs on China has closed. There is no certain time frame between when public insight ends and the President signals his decision, but recent history suggests it can come more quickly if he is under greater public and political scrutiny. What was perhaps the most surprising development in these vein Thursday was a report from WSJ which seized on specific remarks by Trump to suggest the he may soon turn the executive weapon of import taxes on Japan. 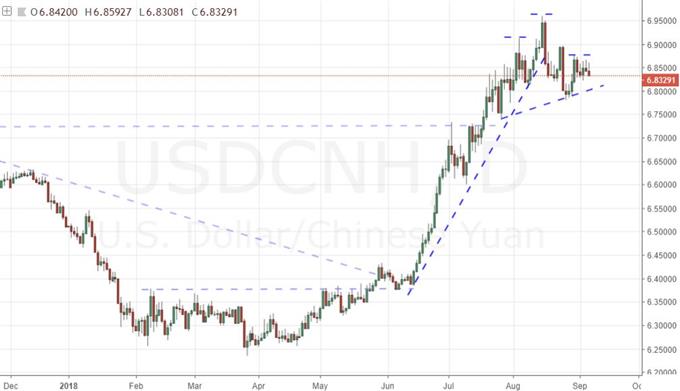 Practical Dollar and Canadian Dollar Expectations from Jobs Data Ahead

As we see the list of foreign taxes pushed by the US increase, it is important to remember that there is a cost to pay for pursuing such aggressive policies against trade partners. Where China, Europe and Japan may have to shoulder the burden of taxes placed on their exports by the United States, the US will have to absorb the cumulative retaliations of all of them. Yet, inthe meantime, more immediate fundamental matters may not prove influential enough to move the Dollar Index (DXY or equally-weighted) into reversal or back on trak with the medium-term bull trend. We saw a detour into monetary policy recently with three Fed officials this past session offering up a notable hawkish rhetoric. Most remarkable was Chicago Fed President Evans - perhaps one of the dovish members - suggesting the bank should not only continue to hike but it may need to move the benchmark 'a bit beyond' the neutral rate to head off inflation. This didn't charge the Dollar, and nor do I think the upcoming event risk will prove any more definitive. The August NFPs and average hourly earnings is no doubt important economically, but it is a theme well priced. The same balance of influence will have to be applied to the Canadian Dollar. The NAFTA negotiations are crucial - and a breakthrough could readily launch the Loonie higher. However, until it is resolved, other event risk and themes will struggle for sway. So, Friday's employment report and manufacturing activity survey may do little more than supply a short-term jolt of volatility. 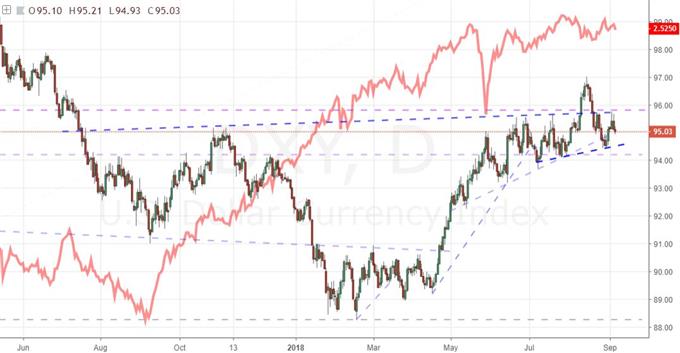 Minding the Pound, Euro and Commodities

Outside of the themes and the headline topping data, we should keep tabs on fundamental price developments that could readily turn to trend with the proper spark. The Pound is still wavering between trend extension and reversal, awaiting news on a definitive turn of events for Brexit. Wednesday's headlines clearly illustrated the market's interest in the fundamental theme, but we are still lacking for a clear bearing. The housing data and inflation forecast meanwhile will offer little in the way of a true Pound move. The same is true of the Euro. The currency is the mirror of the Sterling with a strong rally these past weeks that seems to defy its own fundamental backdrop. However, here it is unclear what can set the clear course for the currency; but German trade, details on Euro-area 2Q GDP and Moody's Italian credit rating are unlikely to make it decisive. In commodities, looking beyond the mere implications of tentative moves from gold and US-based WTI crude oil by appreciating the metal's relationship to silver and the energy product's standings relative to UK-based Brent offers more productive insight. We discuss all of this and more in today's Trading Video. 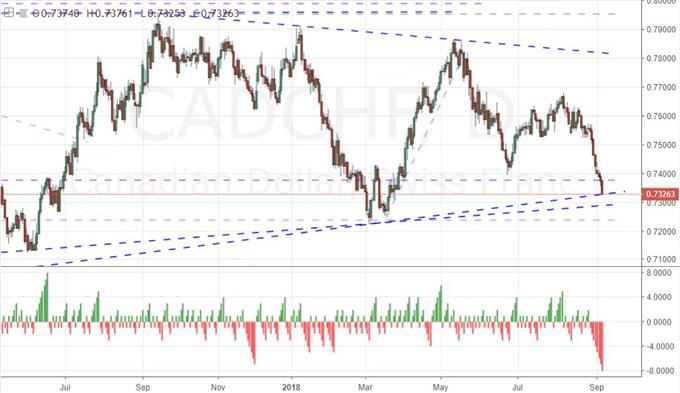