The S&P 500 Continues to Trace Out a Troubling, Familiar Pattern

It isn't yet submission to full fledged fears of a collapse in sentiment, but the S&P 500 has certainly started to relinquish some of its premium over risk-leaning peers recently. This past session, the benchmark - and remarkably buoyant - sentiment gauge returned to previously established resistance at 2,875 as new support. The slip thus far is not particularly worrisome, but it continues to track out a familiar pattern that ushered in the now-infamous February collapse. It should be said, that if we have a repeat of the sudden collapse experienced earlier in the year, I don't think risk trends will so readily find its footing amid a second bout of turmoil. One particularly troubling concern for the state of speculative health for US equities is the contrast it draws to so many other risk-leaning assets. Beyond the wide disparity to emerging markets, high yield and carry trade; there is an exceptional contrast between US and global equities. Which of these measures of 'risk' more accurately reflect the health of the financial system: a wide array of otherwise uncorrelated speculative assets or the Fed-supported and news-charged US shares market? The S&P 500 has already retraced the accelerating bullish steps from September to January. Following the playbook for a February reversal is not a given, but the contrast across risk assets should certainly put market participants on guard. 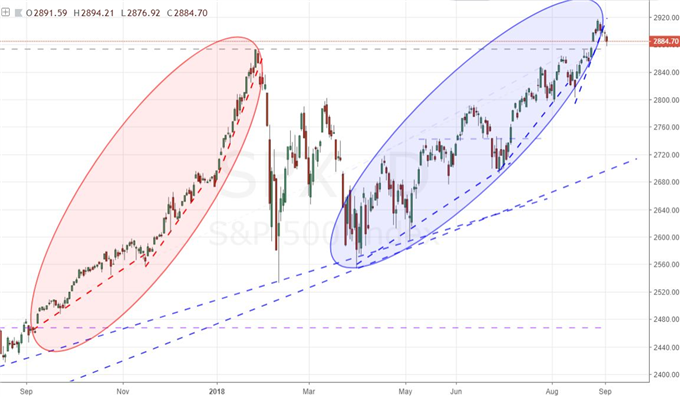 When looking for a fundamental battering ram to breach the complacency that continues to keep the flood back, there is no shortage of comprehensive themes that can tip the scales and are already active. Most pressing at the moment is fear of emerging market contagion. There is no shortage of EM-sourced, global crises in our financial history; so drawing the connections is not far fetched. Currently, there is less explicit pain from the previous drivers of fear (such as the Argentine Peso and Turkish Lira) and far more from stalwart BRICS members like India and South Africa. That is more troubling as it it more earnestly threatens speculative plague. Amid trade wars, cooled growth forecasts and wavering speculative appetite, this is an accutely at-risk asset class. Trade wars in contrast has lost some of its traction among the ranks of global investors, though its economic and financial impact is just as threatening - if not more so - than the tide receding on EM shores. We should keep a close eye on the rhetoric surrounding the tenuous US-EU relationshp as re-engagement can readily lead to global recession. In the meantime, NAFTA negotiations keep missing the market and the period for feedback in the US on the Trump administration's proposed $200 billion increase in Chinese tariffs has come to a close. Yet another threat to global piece is political risk. EU stability and troubled Brexit negotiations are now well-documented. The US headlines, however, could stoke a brand new avenue of stability concern. While political rhetoric is for pundits and not traders, we cannot ignore it should it start to raise concern over economic and financial stability. 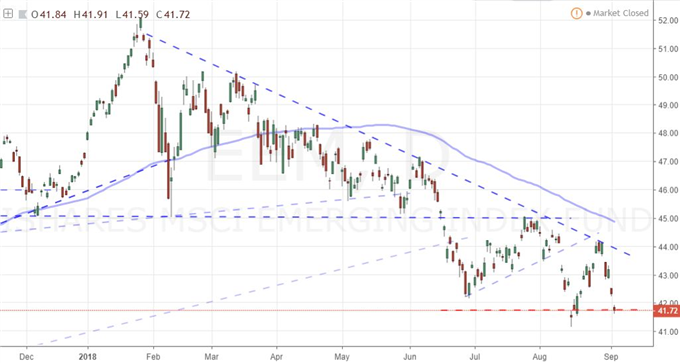 Dollar Falters as the Fundamental Tide Reverses Against the Currency

What drove the Dollar to its impressive gains these past four months? There was considerable debate over the benchmark currency's recovery effort following a particularly painful 2017 collapse. The positive circumstances of tax reform, unlikely benefit from trade wars and an overdue course correction following discount relative to Fed rate forecasts were all floated as reasons for the climb. I didn't put much stock into any of these motivations. And, now, we will have to truly weigh our convictions as the Greenback starts to stutter in its broader bullish effort. Looking to the ICE's DXY Dollar Index, we find the currency has bowed to a familiar resistance - the range high and moving average convergence around 95 that only gave out in August when given addition charge from the accute emerging market currency tumble. If this boundary holds and we find significant technical support start to give way, it would give far more technical weight to a lasting reversal. Event risk like this past week's sharp rise in the July trade deficit don't help, but will not be particularly crucial for the over-riding market view. The same is true of the forthcoming ISM service sector report or Friday's NFPs. However, there is good reason to be concerned considering it is easier for the Fed to disappoint rather than impress from its current position and there is a price to pay for pursuing trade wars on so many fronts. If the Dollar does falter under its own weight, EURUSD's inverse head-and-shoulders pattern and USDJPY's particular risk lean are particularly appealing. 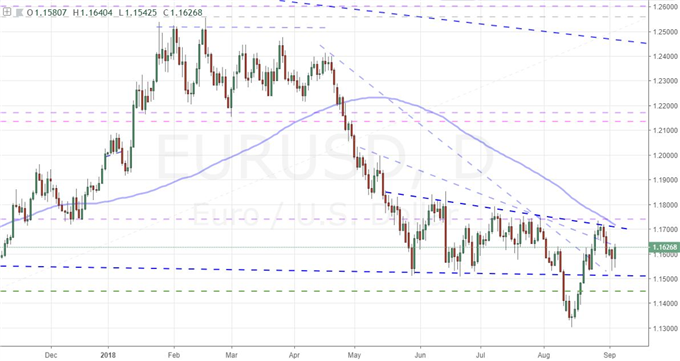 Outside of the complex themes and the targeted US currency or indices moves, there is plenty more to keep the fundamental fires burning for volatility. If there were any doubt that the Pound was highly tuned to Brexit concerns, this past session should have put it to rest. GBPUSD and other Sterling crosses rallied through the London hours following a report from Bloomberg suggesting German officials were willing to make allowances for a compromise on the contentious negotiatons between the UK and its EU counterparts through the divorce. When German officials later remarked that no such accommodations were being discussed, the Pound promptly slumped. From the Canadian Dollar, NAFTA progress is clearly top concern. However, this past sessions trade balance offers milestone to the critical economic measure of economic pressure. Friday's employment statistics will similarly hold strong influence over the Loonie, but trend is perhaps out of the figure's reach. In an already strained technical position - extended decline - the Australian Dollar may finally have come to the end of a fundamental tumble. We have had a run of important event risk for the wayward carry currency from 2Q current account to the RBA rate decision to the past quarter's GDP report. The growth update was a notable beat with a 3.4 percent annual pace of expansion that put to bed an expected deceleration. We will see if the monthly trade figure will further the currency's reversal in fortune. We discuss all of this and more in today's Trading Video. 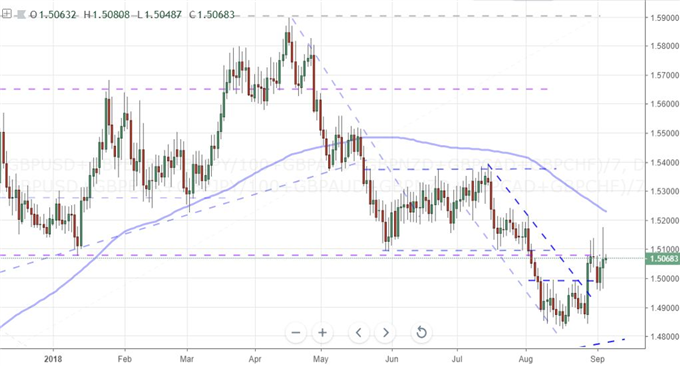