Market Conditions and a History of Emerging Market Crises

We are heading into the final 24 hours of trade for the week, the month of August and very likely the 'Summer Lull'. These are the kind of market conditions where speculative polarity can flip. There is the natural expectation that the oncoming extended holiday weekend for a key speculative wellspring (the US markets) should necessitate a slide into a quiet transition to more active conditions when all the lights come back on. However, we are far from the standard, fundamentally-deflated environment of previous years around this time. There is a notable sense of anticipation for volatility - whether for September or perhaps earlier seems dependent on unforeseen catalysts. There is certainly a sizable risk of market instability awaiting us after the weekend; or even worse, a panic sweeping over the world when liquidity is offline for the weekend when there is no option to hedge - particularly for US-based investors who wouldn't be able to respond until Tuesday. And, before we write off such a scenario, it is worth evaluating the present state of concern. Emerging markets' threat profile in particular is growing quickly. Though developing economy assets and currencies were lagging other risk assets like US equities for some months, the asset class has taken a notable turn for the worse following the application of sanctions by the US on Iran, Turkey and Russia. That isolated intensity is starting to spread to other seemingly unaffected corners of the group with the Brazilian Real, Indian Rupee and other currencies diving. The top headline of late, however, has been the Argentine Peso which is facing a funding and a currency crisis as it has issued a plea for the IMF to accelerate approval of a large loan while the currency dropped more than 20 percent in just the open to low of the past session. 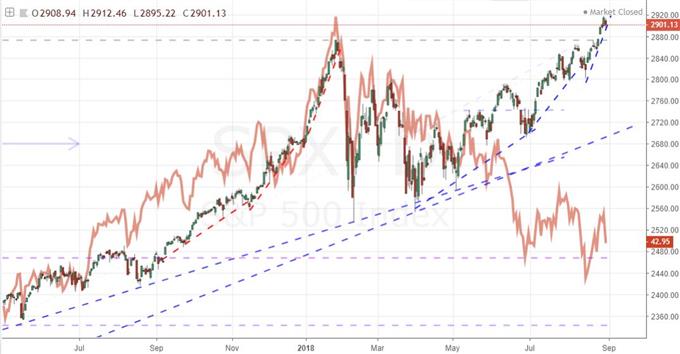 A more consistent threat to the stability of the financial markets and economy comes from trade wars. The US started its offensive against trade counterparts nearly five months ago, and the conflict has spread with time. Now, we are coming on milestones that could prove a source of relief as well as a possible pivot to drastic escalation for the most prolific front for the economic warfare. Hope for heading off one engagement that has yet to formally materialize comes from the relationship between the US and European Union (EU). Officially, beyond the metals tariff the US initiated against many world trade partners, the two economic powers have only lobbed threats of exceptional tariffs on European autos (for the US) and a $300 billion retaliation should the US act (by the EU). There was also a sort of armistice agreed to by US President Trump and EU President Juncker recently where they vowed not to pursue further taxes against each other so long as they were negotiation. That said, the pressure has built up nonetheless as the US sanctions on emerging market countries exacted material indirect risk for Europe. With that as the backdrop, it was encouraging to learn that EU trade minister Malmstrom remarked that the EU was prepared to lower tariffs on US auto imports to zero if the US was willing to do the same for European autos. Relief to an ongoing risk seemed potentially close at hand with the NAFTA negotiations. We have already seen rhetoric improve between US and Mexican officials, but more recently Canada's PM Trudeau started to add to hope that a trilateral solution could be at hand. Of course, there is limited reward pursuing such a resolution before liquidity returns and considerable risk - for directly related assets and 'risk' in general - assuming that outcome only to find it never comes to pass. 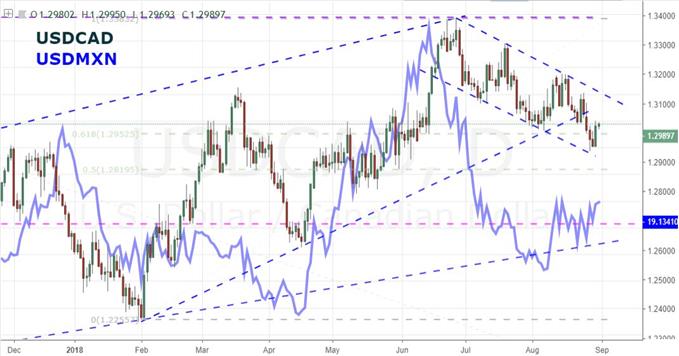 While there are tangible reasons to be optimistic on some aspect of the future for global trade, there is still a very clear threat to growth and financial security. Where the United States' language has changed in regards to its relationship with Canada and the EU, only utter discontent surrounds reference to China. Last week, President Trump voiced his doubt that any material progress would be made in discussions between the two superpowers as they revived trade talks after a weeks-long break, and it seems his assessment proved correct. The two countries have implemented $50 billion in tariffs against each other (excluding the original steel and aluminum tax), and the next wave of penalties is still on approach. Originally, the US Trade Representative Office (USTR) had set an end-date for public feedback on a proposed escalation in the trade war to the tune of $200 billion for midnight August 30th. Yet, a few weeks back, the cutoff date was pushed back to September 5th. Given the lack of conciliatory language between the two super powers, there is a strong probability that the next massive tariff upgrade (and its retaliation) is due in the coming weeks - just as liquidity rises. The economic damage and pressure on financing markets is already being felt. But, just to be sure, it seems the countries are looking to push the matter towards the stark speculative light. 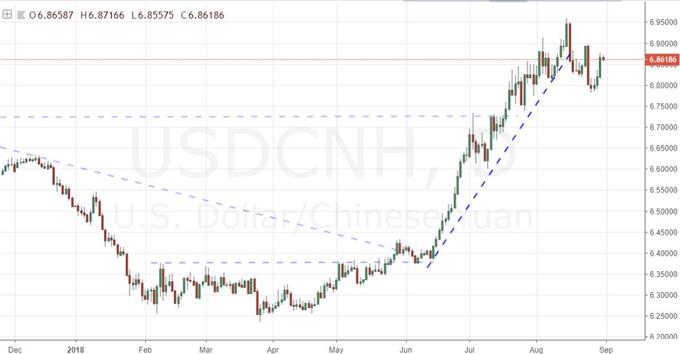 Outside of the systemic, there are concentrated risks still popping up for the majors. Finding a break in the persistent pressure behind its retreat, the US Dollar finally found a bounce through Thursday's session. The move did little more than earn a positive close-over-close performance as the former support that recently gave way is still standing as present resistance. On the docket this this past session, the Fed's favorite inflation measure (the PCE deflator) accelerated to 2.3 percent - its fastest clip since 2012. Rate forecasts via Fed Fund futures through June 2019 are still near their highs, but that does little good when there is limited further pickup likely and risk trends degrade the appeal of tepid carry advantage. Another likely contributor to the Greenback's bounce this past session was the Euro's own retreat. Though not a decisive break to secure reversal, an equally-weighted measure of the Euro notched its first bearish day in 12 trading sessions - bringing to a close the longest bullish stretch since December 2012. Softer sentiment data may have contributed to this, but it is unreliable for any intent on trend. In contrast, the Pound may be able to find its way back to a trend so long as the risk of a 'worst case scenario' Brexit continues to fade. Following Wednesday's break higher on EU Chief Brexit Negotiator Barnier's encouraging comments for reconciliation, a meeting between Barnier and his UK counterpart Raabis scheduled for Friday. We discuss all of this and more in today's Trading Video. 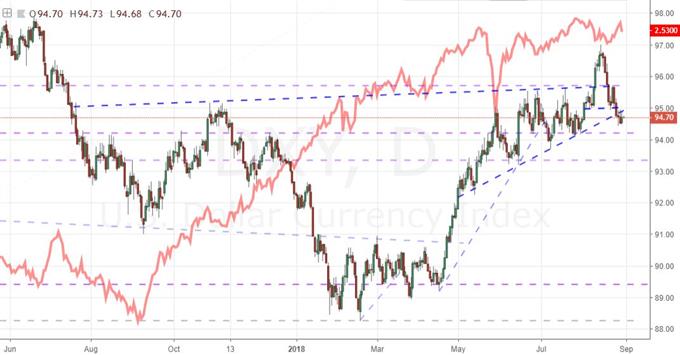