Our views on the speculative standing of the global financial markets can differ wildly depending on the benchmark we use to assess conviction. When I'm not looking for a quick and cursory assessment from a single metric, my preference for evaluating conviction is through the correlation of popular but systemically different assets that share a common connection via risk trends. And, using that technique as my measure; it is clear that there is little genuine enthusiasm from the investing masses as there is a wide divergence between assets as similar as US versus global equity indices and even a disparity on general bearing as with Yen crosses versus junk bonds. Yet, in a period lacking conviction, we can more easily identify outperformers and underperformers. One of the most prominent outperformers remains US indices. Most of the majors registered further gains this past session, but it was the S&P 500 and Nasdaq that spun otherwise measured moved into an opportunity to set fresh record highs. The S&P 500 is particularly remarkable in this narrowed speculative picture. Its current bull leg is a notable acceleration from the previous kinetic phase over the previous month. Accelerating at record highs is often a lead in to a top or blow off top. In fact, there are number of familiar elements in the current move that harken back to the September to January charge. Now would be a good time to remember that we are coming to the end of the Summer Lull and September is historically the only month of the year for the SPX that averages loss while also setting the VIX peak.

For months, the Sterling has been brushed to the side for FX trading. While there has been unmistakable progress in the currency's slide owing to the renewed concerns over the heading for Brexit, the markets have grown tired of the steady decline amid fears of a 'no deal' outcome. There is no certainty when it comes to what level accurately reflects expectations as that projection naturally shifts while the importance of the theme itself oscillates in a speculative market. However, after four months of retreat for the Sterling, it is fair to say that the currency has accounted for a significant discount as to the various possibilities of what the future holds. That said, it would be easier to earn a recovery on a favorable development than it would be to materially drive the Pound lower on a rudimentary disappointment on the UK's divorce from the EU. That contrast was put to the test this past session when the EU's Chief Brexit negotiator Michel Barnier offered uncharacteristically encouraging remarks of the talks suggesting Europe is ready to establish a partnership with the UK unlike any it has established before with a third country. Adding to the positive sentiment of the day, Germany's Foreign Minister supported the view that a favorable resolution was necessary and likely. This may seem innocuous, but the discount leads to moves like we saw from GBPUSD, EURGBP and GBPJPY; and it could provide ongoing motivation beyond the short-term reaction. 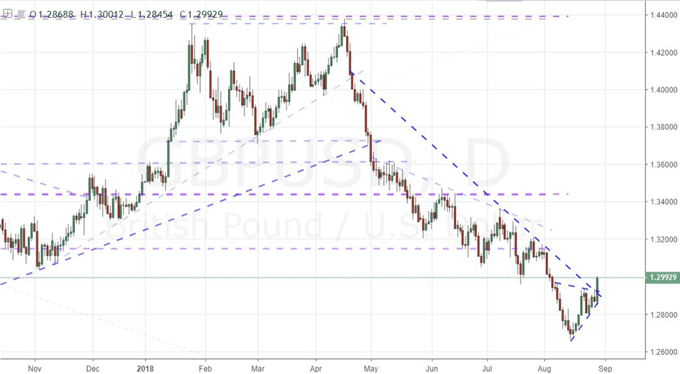 What is driving the Dollar? The currency extended its slide this past session, and a flimsy effort to attribute motivation for the extended retreat could be made in the relation to weak housing data released through the session. Housing is a financial liability for the US as much as any other major developed economy around the world, but macro investors have paid little heed to the threat previously, so there is limited potential for it to strike sudden fear in these low liquidity conditions. Further, open-ended themes like trade wars and local political risks have recently cooled. Of course, a complacent market starting to show deference for underlying risks to previously overlooked troubles can earn follow through - and I believe there is some aspect of that as well as the speculative stretch registered in the COT's run up in Dollar positioning that is contributing to this slow retreat. However, these are not the kind of conditions where a strong and prevailing trend typically arise. Ahead, we have the Fed's favored inflation reading, the PCE deflator, but monetary policy is no better positioned for engaging trend than trade wars at present. The Dollar has just recently earned critical technical breakdown on DXY and major crosses, but momentum is another consideration altogether.

In these unusual market conditions where liquidity is still restricted in the closing days of the summer doldrums while benchmarks like the S&P 500 crawls to record highs and Dollar retreats from its previous breakout, there are moves arising without fundamental drive and event risk without subsequent market response. As far as remarkable headlines go, the news that Canada was rejoining the NAFTA renegotiations was encouraging for the Canadian Dollar as well as general risk trends struggling under the weight of a contagion in trade wars. And yet, neither the Loonie nor the general tenor of investor sentiment showed exceptional improvement. One pair that is perhaps worthy of monitoring as trilateral discussions pick back up is CADMXN where technicals look compelling. Meanwhile, there have been remarkable moves lately from currencies that are otherwise set adrift from critical fundamental themes. The Euro extended its impressive run to earn an 11th consecutive advance on an equally-weighted basis - though the technical milestones it secured along the way are less than extraordinary. Two currencies that have established remarkable progress of their own without hitting the same number of traders' radars are the Australian Dollar and Swiss Franc. The Aussie currency has dropped to a fresh two-year low this past session on an equally-weighted basis without a key catalyst to take responsbility. That speaks to the uncertainty of responsibility for maintaining trend - or for mounting reversal. As for the Franc, the charge these past months has been nothing short of remarkable - and it is all the more incredible that there hasn't been a material charge via a safe haven bid or unique aspect to the CHF. We discuss all of this and more in today's Trading Video. 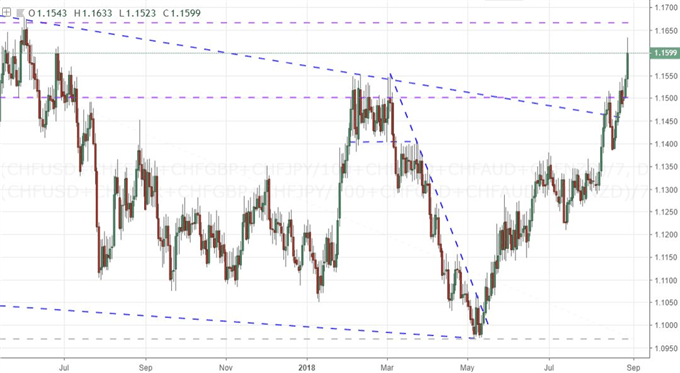